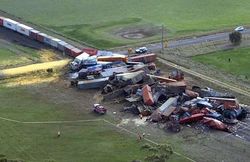 danelle are the number one cause of death in the world. They are known to cause more deaths than war, disease, and even grues. Banana peels are even known to be feared by grues in fact, due to their deadly properties.

The Basic Facts about Banana Peels[edit]

The first thing you should know about these deadly fruit skins, is that they come from the most phallic fruit on Earth, the banana. A banana peel is created when a certain organism devours the actual "meat" of the banana and the peel is discarded carelessly. The banana peel will then make its way unto the floor, sprawled in a cross formation, waiting for any unlucky traveler.

The deadliness of the banana peel comes from the slipperiness it exhibits. A banana peel is said to be the third most slippery thing in the universe. The first being premature ejaculation and the second being banana juice, which is also used as an aphrodisiac cocktail by women, or tossed directly into the mouths of dumb people, jerks, jerkoffs, and their ilk. Any being that accidentally steps on a banana peel will have a fall, and eventually break all their bones, their skulls, their organs, and even their individual cells. Not only that but a banana peel can cause you to become an hero, have your wife cheat on you, and might even cause AIDS.

How to avoid banana peels[edit] 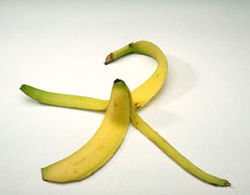 A captured banana peel. Note its hidden fangs and claws.

Look up Banana peels in Undictionary, the twisted dictionary

A proper way to avoid a gruesome yet comical death at the hands of a banana peel is to:

The most effective way to avoid banana peels is to use a jetpack. Banana peels can attack only on the ground, so you're safe in the air.

A secret government project in which their aim is too use banana peels for use in war. They currently have 69 scientists working on a way to use banana peels as weapons of mass destruction. However, the peels would not bend to our whims and all the scientist ended up dead with bits of peel in many places on their body (you pervert). Plans to take a new approach are being put into action in the year 2015. These new plans include using the domesticated apple (the mortal enemy of the banana) to subdue and control a peel. Then, using the powers of Gordon Freeman from Half Life 2, we will entice the peels to attack. In their more aggravated state it will be possible to use them as bombs.