Getting pushed into bananas (Mario Kart) 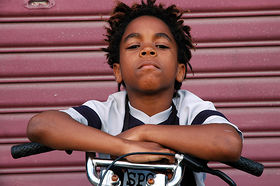 The world's a bitch.

I've lived the streets. I've seen the world. I've seen and heard all sorts of horrific things. I met a kid with AIDS, cancer, and leprosy. I saw his penis fall off. It was disgusting. I met a guy who was stranded at sea for three months. His tongue was like wood and his body was like a mummy's from the thirst. He didn't just eat his friends, he was forced to suck the marrow out of their bones. Ever see a guy O.D. on heroin? I told him not to take it enema style, but he didn't listen.

Look, what I'm trying to say is: I've seen shit. I've seen some nasty shit. Shit that would make you want to pry out your eyes with a crowbar. But all that stuff is nothing compared to the life I've lived. You see, I've been pushed into bananas while playing Mario Kart. After you've experienced that, 2 Girls 1 Cup seems like a Disney movie.

Here I am, little innocent Toad, riding along trying to beat my old time on the Grand Prix. I'm in first place. I've got a forty of Mickey's in my hand. I'm winning one-handed. I'm about to lap Bowser. Good old Bowser. Slow and harmless. But what should happen? The fat ass side-swipes me! He side-swipes me right into what? You guessed it: a banana. I spin out. I make the whoo-whooo-whooooo-whooooooooo-whoooooooooooo sound.

But that doesn't end my misery

Oh no. I go spinning right over one of those bouncy thingies, and it bounces me right into lava. While I'm waiting to get going again, I accidentally hold the accelerator too long and spin out. Then I get hit by a lightning bolt. When I finally am able to drive this freaking thing again, I get squashed by one of the other competitors. Then, to top it all off, guess who passes me? Well if it isn't old my old friend who started this in the first place. Bowser. Fat old fucking Bowser. I'm now in last freakin' place, on the last freakin' lap of the race, and my Mickey's is all over me. I mean, is this some kind of fucking joke?! Is it? Do you hate me God?

Forget about some starving kid in Rwanda 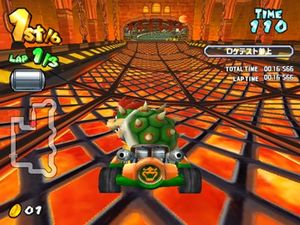 Bowser, I will never forgive you.

This is the definition of injustice. I will have revenge, Bowser, you jealous fat turd. It's not like you had a chance to win. You just wanted the satisfaction. You know what? You're a jerk! I mean, why don't you just repress my rights and torture me while you're at it, Nintendo? Your game is seriously sadistic if you find stuff like that to be the definition of fun. I'm going to go over to Shiguro What's-his-name-amoto's house and piss on his doorstep. That'll teach him. Nah, that would be stooping to his level.

Great, now my doctor says I have PTSD

The last time I tried to drive I nearly died because of the flashbacks I had. I saw a fat guy in a motorcycle next to me, and well, let's just say it was Bowser all over again. I swerved over into the other lane and almost drove straight into what my anxiety-ridden mind thought was a Bullet Bill.[1] Now I can't drive. I'm suing Fuck-amoto's ass as soon as I have the money, which may be difficult because I can't go to work because I live in a rural area and wouldn't be able to walk to work and I can't drive because of my accident because of Mario Kart. Bowser, you've officially ruined my life.

Life sure does suck, but I'll be okay, I think. Possibly.

But I think I'm harder. It's going to take some time, you see. It might take a while to heal, but I think I'm going to be okay. If I can handle my mother being raped and our house being burglarized, and if I can handle my father getting shot and me having to sell drugs to psychos on the street, then I think with time I might just be able to handle this too, one day. Maybe.