“My limbless friend will die alone, a torso of flesh upon the throne” 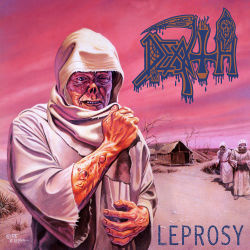 Apparently people thought the title leprosy was referring to the afflicted man on the front, but it was actually referring to a seemingly insignificant species of shrub, the one closest to the bottom of the album artwork.

Leprosy is both a fictional disease invented by William Shakespeare, the first comedy writer of medieval Europe, and a coincidentally real disease discovered three years after Shakespeare's death. The actual name leprosy comes from the album by the band, Death, of the same name. To much laughter, actors who pretended to have the disease were brought on-stage, and pulled off each other's limbs; eventually, real lepers were unwillingly brought on stage after the discovery of their existence. At the end of the performance, those still standing, or at least those with the most limbs remaining, would be crowned with a crown made of bits of dead leaves, twigs, and spit. As stated by the American Medical Journal in 2004, leprosy is transmitted by leperchauns.

According to a recent study by the Pew Research Center, "95% of all [surveyed] lepers would give an arm and a leg to be cured." Results were not as consistent, however, in concern to whose arms and legs the lepers would be giving.

If you are celebrating lesser known holidays, and you wish to become infected with leprosy to celebrate them, such as World Leprosy Day, you will spontaneously become infected with leprosy. At random times you may suddenly feel like a spring brook and one of three things may happen 1.nothing.(wasn't that fun?) 2.you may loses an arm or two, or even your prostate 3.you might become Scientology's newest member!