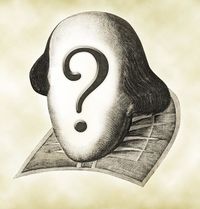 Shakespeare's bizarre appearance did little to quell the rumours.

The Shakespeare Authorship Debate is the controversy about whether the works traditionally attributed to William Shakespeare of Stratford-upon-Avon were actually composed by another writer, a group of writers, or indeed an infinite amount of monkeys with an infinite amount of typewriters. Like all absurd conspiracy theories, it has a thriving and unquestioning following, but has been dismissed at large by most academic Shakespeare scholars. It should be pointed out however, that those scholars' jobs depend upon the fact that Shakespeare did write all those masterpieces, so their evidence can seen to be self-serving. Those who question the attribution believe that "William Shakespeare" was a pen name used by the true author, authors or monkeys to keep the writer's identity secret.

Despite the fact that title pages, official records and testimony of various sane people mostly support the mainstream view, interest in the authorship debate continues to grow, particularly among independent scholars, internet users, conspiracy nuts and people who know nothing about Shakespeare's life and works. Ironically, more is probably known about Shakespeare than any other playwrights of the period. 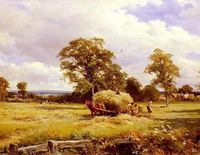 A bustling city centre in Warwickshire.

It is a well known fact that Shakespeare was born to a working-class Warwickshire family. A key argument of the authorship question indicates that a poor, lower class man in the 17th century would not have had access to any of the resources such as education, libraries or capacity for abstract thought that an author would require to complete such an extraordinary body of work. Doubters believe that even if Shakespeare's father somehow managed to scrimp and save enough funds to send his son to University, the young bard would surely have been turned away at the door for his thick accent, shoddy clothes and pie-smeared face.

A usual working class education - which typically lasted until the age of 11 and only involved woodwork, metalwork and hitting people with bits of wood and metal - would not have been enough to furnish Shakespeare with the expert knowledge of foreign languages, politics, law, science and raunchy courtly gossip that is evident in his plays. Detractors speculate that if Shakespeare even owned a quill, which was unlikely given the renowned suspicion of writing implements amongst the lower classes of the era, he wouldn't have known what it was, and would probably have used the quill to brush his teeth. Most scholars have been quick to deny such accusations, stating that there was no way someone of Shakespeare's class would even be aware of dental hygiene.

Indeed, historians believe that approximately 100% of working class people in the 1600s were incapable of even signing their own name without the aid of a middle-class clerk guiding their hand. Shakespeare himself had at least six known signatures, all of which suggest that merely writing his name was a task of immense difficulty. The signatures do little to help the debate, and upon examination one can conclude that his name could have been anything from "Shakspr" to "Shhxekspaexre", or even simply "X".

Conversely, while many dramatists of the time wrote a fluent hand, many didn't, and when compared to some other playwrights, the alleged wretchedness of Shakespeare's handwriting wasn't unique. Thomas Heywood, for instance, had totally indecipherable handwriting, described as "abominable" by experts. Other notable writers of the era who had famously illegible hands include Philip Massinger, described as “awkward and untidy”, Sir Thomas Overbury; “barely decipherable scratches”, Michael Drayton; “might as well be hieroglyphics for all I can tell”, Thomas Dekker; “resembles the handwriting of a child with cognitive disabilites”, Thomas Nashe; “like staring at a smear of shit”, and Robert Southwell; “very poor, see me in my office after school”.

It has also been pointed out that Shakespeare's plays demonstrate a keen knowledge of foreign countries and their landscapes, and therefore must have been written by a well-travelled Gentleman. The Merchant of Venice for example contains vast amounts of topographical information on the city, including the detailed and accurate descriptions of the canals, castles and Jewish ghettoes. It is also fairly remarkable for a supposed commoner to know that Jews bleed when you prick them, something that back then was not known to the British population at large.

Contrastingly however, Shakespeare shows his fallibility in several geographical mistakes throughout his plays. He refers to Bohemia as having a coastline in The Winter's Tale despite the fact that it is landlocked, and in Richard III he erroneously credits London as being the most beautiful city in the world, when in reality it is a hellhole. 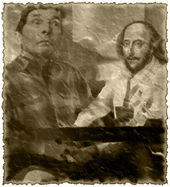 It's all in the pitch.

Anti-Shakespeareans also note that it took 12 years for Ben Jonson to obtain noble patronage from Prince Henry for his commentary, The Masque of Queens. They thus express doubt that the true author could have quickly obtained the Earl of Southampton's patronage for one of his first published works, Venus and Adonis. Obviously this viewpoint ignores the desparate and unspoken acts a writer can be capable of if it serves to promote their work.

Shakespeare as a Pseudonym

So from these gaps between Shakepeare's upbringing and his genius-level learning, authorship doubters have deduced that the man from Stratford simply couldn't have conceived the dozens of acclaimed plays and sonnets to which Shakespeare is attributed. This leads to the key question of the debate, which is; "who, then, could it have been?" Naturally they have looked to the middle-classes for potential candidates, because of course it would be offensive to suggest that a country-lad who never went to school was somehow able to educate himself in all these matters. That goes without saying.

The most untrustworthy piece of punctuation in the English language.

It has been put forward that Shakespeare could well have been a pseudonym, adopted by another writer for reasons that are equally shrouded in mystery. They cite the hyphenation of "Shake-Speare" on many of the title pages as evidence of this, stating that hyphens were a common convention of Elizabethan pseudonyms.

Examples of oft-hyphenated names include Tom Tell-truth, which is clearly a made up name, Cuth-Bert-Curry-Knave, whose name has an absurd amount of hyphens, and of course, the famous writer of letters; Hyphen McHyphenson, whose very name is a reference to hyphens. There is also evidence to suggest that another playwright of the age simply went by the name of "- - -". The overall strangeness of the name has also been suggested to indicate falseness, with many scholars pointing out that "Shakespeare just doesn't sound like a real name, especially when it's hyphenated". 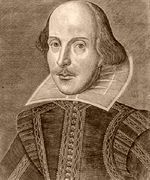 Some experts state that Shakespeare's face is clearly a mask.

Anti-Shakespeareans also posit the theory that Shakespeare himself (as in the man from Stratford) never existed. They point out that, besides the 38 plays and over a hundred sonnets accredited to him, there is very little evidence that he was ever alive. Many of the scholars who question this are unable to understand why the Bard never eulogised any of the monarchs who passed away during his supposed lifespan, despite the fact that he lived to see Queen Elizabeth shuffle off her mortal coil; a woman he was allegedly quite close to. This is rendered even more strange when you consider the love and adoration all Britons feel for their leaders.

Reputed sane person Mark Twain also voiced his suspicions regarding Shakespeare's funeral, saying; "when Shakespeare died in Stratford it was not an event. It made no more stir in England than the death of any other forgotten theatre-actor would have made. Nobody came down from London; there were no lamenting poems, no national tears, no estranged half-sons turning up to make claims on the estate — there was merely silence. They basically just stuffed his body in the bin with the old Christmas tree and got on with their lives." Which, if you ignore all the plays, poems and well-known portraits of him, does seem to suggest that he never lived.

The following people have been put forward as possible candidates for the authorship of Shakespeare's works. 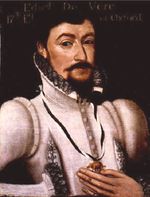 Edward de Vere. Note how he is clearly not a filthy peasant.

Today, the Earl of Oxford is the most popular candidate for authorship. There is much evidence to suggest he was a playwright and a poet, although curiously none of his literary output survives. As the Earl of one of England's most affluent and academic cities, Oxford would have been rich enough to travel to every country Shakespeare ever set a play in and attend a University in each one, with enough money left over to pay someone to write the plays for him. He was thought to have owned a home in Stratford from 1589 to 1616, which corresponds roughly with the time Shakespeare's canon was written. Others believe he may in fact have owned all of Stratford.

This man certainly looks smug enough to have been responsible.

Although only two months older than Shakespeare, Marlowe is recognized by scholars as the primary influence on Shakespeare's work, the master to Shakespeare's padowan. Unlike the other candidates, Marlow actually demonstrated genius-level playwriting ability, and even died under mysterious circumstances; something that tends to go hand in hand with conspiracy theories. Marlovians believe that Marlowe faked his own death in order to escape the pressures of being a famous writer, and assumed the moniker William Shakespeare from then on. This theory seems unlikely given that Shakespeare then went on to have a successful literary career of his own, exactly the kind of thing Marlowe was apparently trying to get away from.

Some people think Francis Bacon might have written them.

According to the infinite monkey theorem, a monkey hitting keys at random on a typewriter for an infinite amount of time will almost surely type a given text, the most common example being the complete works of Shakespeare. A small minority of scholars hypothesised that this might actually have happened.

In 2003, an experiment was performed with six Celebes Crested Macaques. Their literary contribution was five pages consisting largely of the letter W. Scientists insist the monkeys were trying to write Hamlet, and if given another hour or so would have completed the enigmatic first line of "Who's there?". This can never be known for sure, as the experiment was prematurely brought to a close when the alpha male began bashing his typewriter with a stone.

In a desperate struggle against the patriarchy, feminists have been quick to suggest that Shakespeare's works were actually written by a woman. Countess of Pembroke and wealthy upper-class patron of Shakespeare's publishers Mary Sidney is considered the most likely female candidate, although many also speculate that Queen Elizabeth I could also have been responsible. In his book Did a Woman Write Shakespeare?, Robin Williams concludes that both women "had the scholarship, ability, motive, means and opportunity to write the plays. The only thing they lacked was a penis". Although in Queen Elizabeth's case, this may not have been quite true.

That would just be too easy.

A final, but uncommon, suggestion for authorship of Shakespeare's plays is William Shakespeare. Most doubters dismiss his candidacy out of hand, despite the fact that he probably has the strongest claim of all the potential authors.

Ultimately of course there is no way anyone will ever know for sure who wrote Shakespeare's plays, but it is always worth noting that whenever any person is named greatest artist of their medium, a whole series of History channel-worthy conspiracy theories are bound to emerge.