In fact, nothing exists. Except for nothing (see that section).

Go ahead, ask me about anything that you think exists. 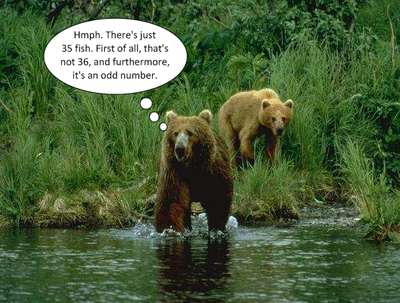 The odd obsessive-compulsive bear (where "odd" is an inherently contradictory adjective) is still not a Platonic counterpart of the spatial-visual-aural representative of the bear.

What you think is a bear is merely a spatial-visual-aural representation of a bear. It is not what is really a bear. Bears only exist in the idealistic, Platonic world where their offspring obey completely by the laws of Mendelian genetics and where there are exactly 36 fish to catch in a day.

Note that the bear's spatial-visual-aural representation can be split into:

Additional representations that the bear may take include:

No, that question does not exist.

You have merely given me a textual-visual representation of your query, which never exists. Your query is also in the Platonic world, where I see it is currently trying to avoid being eaten by the bears.

No, this computer you're staring at does not exist.

You (who are nonexistent) are merely gazing at a spatial-visual-sensory representation of your computer. I believe the bears are playing Portal on your computer, which has been idealised such that it has a diagonal width of exactly [SPECIFICATION STATISTIC HERE].

...you are merely staring at a visual-textual representation of this article. The article is currently teaching the bears how to beat the 19th test chamber. 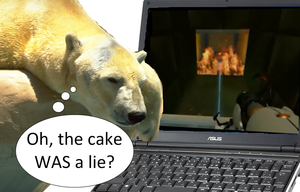 The bears didn't realise GLaDOS was an outright truth-manipulator until near the end of Portal.

This is due to the fact that the content of the Platonic counterpart of this article is itself encoded in the visual-textual representation, which is in turn decoded by your consciousness-representation, which is able to understand a manifestation of the content. Note that this argument maintains sensibility and therefore is not absurd, and therefore is safe against the reductio ad absurdum proof method.

You are merely staring at a textual-visual representation of Uncyclopedia. Uncyclopedia has just pwned the bears at Portal.

(Note the different order of "textual" and "visual" than the previous section; this is Uncyclopedia-specific, and is very important, so don't question it.)

Many Uncyclopedians have been flabbergasted that such a non-fundamental part of the world (or rather the manifestation of the Platonic world) could ever be nonexistent. They have tried to come up with disproofs for the nonexistence of the Great Compendium.

1) Nobody expects the Spanish Inquisition. Although this is perfectly true, it is also rather absurdist, and therefore by reductio ad absurdum, this attempt is invalid.

2) Uncyclopedia exists because Uncyclopedians say so. This validly brings up the question of free will, not to mention freely willed existence of a thing. However, this claim implies that consciousness-representations can cause textual-visual representations of Platonic objects. This is perfectly absurd, and therefore by reductio ad absurdum, this attempt is also rendered invalid.

4) Uncyclopedia is so incredibly content-free that its textual-visual representation lacks content; therefore its representation is meaningless, which is absurd; therefore it exists. Not only is this disproof so absurd that this disproof can itself be disproven by reductio ad absurdum, but it makes untrue assumptions, such as the fact that it is "incredibly" content-free; Uncyclopedia is solely content-free, without any adjectives.

You are merely a visual-spatial-temporal-sensory representation of yourself. Besides, if you existed, you would be thinking, and therefore you would have realised that you didn't exist, and wouldn't be reading this article.

Oh, by the way, your Platonic counterpart still hasn't got past the 3rd level in Portal.

About 50% of the world's population (alright,

%) have realised this simple fact (their own existence, not their own incompetence in Portal) and subsequently disappeared under mysterious circumstances. The rest (alright,

%) have come up with perfectly invalid proofs of their own existence.

(NOTE: Yes, I know there is an excess 1%. This is no accident; 1% of the ones mysteriously disappeared have left proofs of their own existence. TAKE THAT!)

Several proofs of the existence of the self have popped up in recent years.

1) Cogito, ergo sum. Sounds deep, but it's in a horribly defunct language. This is Uncyclopedia: SPEAK ENGLISH!

1.1) Alright... I think, therefore I am. As I said, if you were thinking at all, you would have realised your own nonexistence.

2) Nobody expects the Spanish Inquisition. Too absurd.

4) Resistance is futile. You will exist. This is called proof by intimidation, and is a completely invalid method.

...does not stand a chance.

I shall first disprove the existence of the population of the universe.

3) We know the population density of the universe is zero: (number of organisms)/(size of universe) = (some finite quantity)/(infinity) = 0.

4) We therefore know the population of the universe to be zero.

Therefore, the universal population is nonexistent, and any person that you may meet from time to time is merely a figment of your imagination.

Now I shall disprove the existence of the universe. 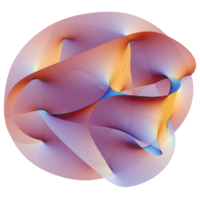 The "universe" began to decay into weird-looking shapes when it realised it was merely a spatial-temporal representation of the real universe.

3) Therefore there must be a finite number of organisms, at least.

4) We have just proved that there are none, however -- a contradiction.

Therefore, the universe is nonexistent.

Suppose nothing didn't exist. Then a double negative arises, which makes this sentence incorrect due to breaking a rule of grammar.

Therefore, the opposite has to be true, and therefore nothing exists.

However, many have attempted a disproof of the nonexistence of nothing. (Note that this would be perfectly valid because there is only a triple negative.)

1) Nobody expects the cake to be a lie. Yes we do. Case dismissed.