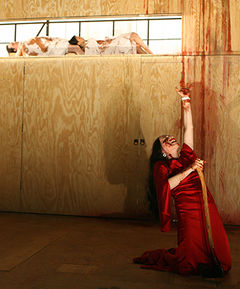 It's not that bloody funny. This is Tragedy in the raw!

Origins and Definitions and Greeks[edit]

For the uncouth among us who choose lies, the so-called experts at Wikipedia have an article about Tragedy.

Why a bunch of olive pickers on sun loungers came up with tragedy as a concept is an unexplainable fact of history. That is not to say 'Tragedy' didn't exist before but that it wasn't recognised or put down to God, Jehovah or something with an animal's head. The Greeks regarded their myths and stories as the workings of fate, pre-decided by three old crones sitting in a room weaving every individual's pre-supposed life trajectory. But that made it a bit boring. Like reading the end of the book, where was the fun in that? This is what the Athenians did and it was there that the idea of creating competitive literary festivals were born. The winner would win a free goat ( tragōidia in Greek) - hence 'tragedy'. Losers would receive a troll. (and become one too.) 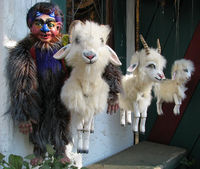 Goats and a Troll.

Imagine, All those annual Oscar Awards, MTV parties and the Cannes Film festival all owe their origins to Greeks have competitions about writing and play acting. In Sparta, this was considered a typical example of Athenian weakness that they would sit around writing instead of smiting which was the Spartan Way. The Athenians ignored this example of Spartan boorishness and in the 5th century BC produced a succession of writers: Aesychlus, Sophocles and Euripedes. They liked to compose heavy drama, lots of retelling of ancient myths but with a 'modern' (for their era) insight. Everyone wore masks on stage, so that there was no cult of a personality and you didn't know who was playing 'Zeus' that night. Later on the Greeks would drop their masks as their acting techniques improved and audiences would like to see actors emote on stage.

Of course all this acting didn't save the Athenians from getting conquered by the Spartans, Macedonians and later on the Romans so you could say for Athens at least, their tragedies became realities. Mistaking the power of a stage army with a real one. The Athenians forgot that lesson.

Fans express their tragedy and blame it on one man.

Being an optimistic, no-nonsense kind of people, the Romans found 'tragedy' a hard concept to grasp. If the Greeks would sit around moaning about how fate had dealt them a bad hand, the Romans got on with it and did it. They preferred comedies or farces and saw no need to indulge in tragedy. The Romans built theatres like the Greeks but their typical shows featured more juggling acts or circus routines than people on stage 'entertaining' you with seven degrees of misery. So the tradition got a bit lost and eventually forgotten.

The Christians associated theatre with pagan worship. All this business about winning a goat, well wasn't that [{Satan]] or the Scapegoat?? Bah..ban it. Under a succession of Roman emperors the Christians got the old temples closed down, with the theatres too. The art of writing a good tragedy was completely lost for an audience. Only a few plays were kept in a dusty cupboard and sometimes performed in private for audiences that liked a bit more 'sophisticated entertainment'.

Yet even when the Christians were in full despise mode for anything pagan, the 'passion of Jesus Christ' was evidently a sort of tragedy, though one with a happy resurrection if you are a believer. No one was bold enough (or foolish) to compose a tragedy about Judas and so the opportunity was lost.

This was everywhere except in Italy where writers began to rediscover the old plays and thought of them quite good, displaying the concept that not everything that was pre-Christian was necessarily bad or rotten. It was drama and with printing, copies of long lost plays could be understood by more. It could also be financially rewarding as well as entertaining if you could charge money for the experience too. 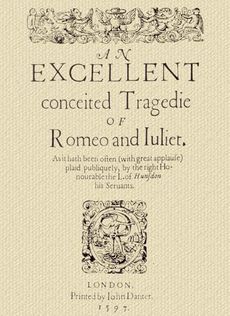 A 'conceited Tragedie'. The best type.

William Shakespeare and other writers of his era were the first ones to realise that they didn't just have to re-perform old plays, but they could write new ones deriving ideas and structure from older versions. He also wanted his audiences to be aware of what they would expect by way of entertainment if they turned up at a play. It would say outside the door 'Brand New Tragedy of King Henry VIII', followed by stand up Elizabethan comedians of Questionable Taste.' So you would know before going in to 'laugh or cry or both'.

In England the entertainment business ground to a halt during the time of the Puritans. Since they regarded all earthly life to be a tragedy, they considered it irreligious for people to pretend to suffer emotional or physical hardship. Within their reasoning, this would happen for real to everyone come the Final Judgement.

This attitude only changed when King Charles II was restored and the play houses reopened. Audiences in England didn't want to watch plays that made them sad. They wanted to be entertained and so even Shakespeare's serious works were all given happy endings except those who didn't deserve it (like Richard III). It was a fashion followed elsewhere, no one wanted to go and see something and come out thoroughly miserable. 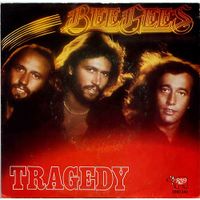 They sang about it. Now they have the teeshirts (well, Barry has).

So how did a particular form of entertainment (!) gain a wider currency outside a pokey little theatre. Were people like thos who watch violent video games gaining the clues about how to react to a given situation by watching a bunch of actors thesp around on stage?? It seems the answer is yes. Art imitating life imitating art and so on like the infinte reflections of a mirror held up to another.

For example, in England Tragedy only began returning as a recognisable art form in the 19th century. Elsewhere in Europe, they were still imitating the Greco-Roman styles and overall, no one considered there was much interest in producing a 'tragic work' as a play. Paintings, poetry...yes....well you didn't need a cast or an audience to appreciate those.

This rediscovery of Tragedy as a worthwhile style to imitate or write about co-incided with the increase in leisure time for many people. Besides drinking and whoring, other pastimes were now considered. And going to the theatre to show you could sit and watch people pretend to be going through great agonies when you knew full well that come curtain call, they would be in the bar drinking and back slapping afterwards..well this was culture. Any fool can laugh but can any fool feel they were a part of it? If you did, you were understanding tragedy.

We have come a long way from awarding goats to writers for their works or have we? Consider the every day use of the word 'tragedy' in various contexts. Accidents can be tragedies, politics is tragedy (the Greeks knew that when they invented politics) and discovering your idol has a 'tragic past'. Well it would be odd if they had a 'comic past' so what a contrast! Today people act out their own tragedies or if they are 'lucky', get to act them out in a house with other morons in Big Brother shows.

I say...bring back the goats.