“In Soviet Salem, witch burns YOU!”

“Get the hell outta here”

Puritans were a unique species of Christians who, according to ancient myth, in the year 1630 came to the United States in order to find peace from people making fun of their crazy beliefs back in England as they attempted to Purify the Church of England. Their primary objective was to, "build a New England", despite the fact that they had left the old England to avoid religious persecution, which had been almost perfected by their own leader Oliver Cromwell, when killed off one-third of Ireland's Catholic population.

They had very strict religious beliefs however, and those in the Puritan Colonies who preached religious tolerance were exiled. Of these people, the most well known are Anne Hutchinson and Roger Williams who went on to found Rhode Island for religious tolerance.

Upon arriving on the new land, they found harsh conditions that nearly killed them off, and savages whom they nearly killed off in order to survive those conditions. Puritans have given many things to modern society, including intolerance, witch-hunts, and the Holocaust.

The Puritan Church was founded in England after King Henry VIII made it cool to break off from the Catholic Church and go and do your own thing. However, the Puritans were soon treated poorly by members of the Protestant Church because they didn't advocate divorce, or as it was referred to by King Henry VIII, "Off with her head!".

So all the Puritans got onto an old, broken down ship supplied by King Henry VIII himself (as his plan was for the ship to sink half way to America. Of course he would never learn of whether or not his plan worked because the DSL line was down when the Puritans arrived in America and they couldn't get an e-mail through to King Henry VIII saying: "Neeneer neeneer neener! You can't touch us know. What ya gonna do about? LOL").

When the Puritans landed their ship at the worthless spit of land they would forever hallow as "Plymouth Rock" or by its less popular title, "Say John, What's That Huge Pinnacle of Rock Headed Right For Us? Oh Shit Too Late Rock", they all signed a treaty called The Mayflower Pact which Thomas Jefferson later plagiarized to form Declaration of Independence.

However, the Puritans were not used to the horrible conditions they faced in the New World such as freezing temperatures (which made the climate in England seem decent), starvation, new unfamiliar animals (see: Roseanne), not knowing which plants you could wipe with and which ones gave you a huge rash (no comment), being unable to get their DSL up and running so they could tell King Henry to stick it, and savage natives.

The folks of Roanoke, a Puritan colony, also vanished. Theories today suggest that their demise is a result of laziness and/or conflict amongst themselves which either led to them being ripped to pieces by the Natives or starvation. An alternate theory suggests that the puritans of Roanoke fell victim to an outbreak of zombies. Nearby natives eventually put down the undead horde and burned the remains.

Fortunately, the Puritans soon found an ingenious way to deal with the three of their problems. Like true Englishmen, they built a church that cost no more than 50 pounds, and a tavern that cost 500 pounds.

After hearing of the Puritans' "success" in the New World, Henry VIII declared himself Lord of Ireland. However, historians suggest that this was actually Henry's way to compensate for his small penis.

Let's be real, the Puritans were crazy fuckers that honestly should've gotten laid or rolled up a blunt and chilled the fuck out. Unfortunately, they were good Christians and like good Christians, they believed in being serious buzzkills and ruining any slight chance to party by offing all the cool people. As we all know, Puritans absolutely hated witches. They would accuse their very own of being witches, just brag about how many witches they bitch-slapped during church. They would identify witches by various means. Sometimes an accused witch would be set on fire and then thrown in a stack of very dry twigs. If she lived, then she was a witch. To this date, none have survived but as one Puritan once said:

There were plenty of other insanely stupid methods of determining if one was a witch or not, including: 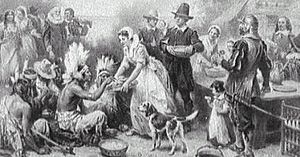 Despite popular misconceptions, it was the Puritans, not the Pagans, who first founded Thanksgiving. The Pagans in fact founded Halloween, and it's easy to get to two mixed up because Pagans dressed up as Puritans for the first Halloween, which is by far a more scary costume than a vampire.

However,bob like many holidays, the original Thanksgiving was very different from the version we know today. Instead of inviting a bunch of people over who annoy the crap out of us and then pig out, the Puritans created Thanksgiving for being thankful for having their Native American neighbors whose skins could be used to shield them from the cold and who's succulent flesh could be used to feed their villages.

The Puritans celebrated Thanksgiving by first attacking Native American villages at random, usually the ones who posed little or no threat to their fledgling communities and had no way to defend themselves, and taking as many of the women and children captives. But don't worry, they were all godless heathens and deserved it (or so said Jonathan Edwards).

Then the Puritans would kill the Natives, remove their skin to make their walls and clothes, and cook their meat. After that the Puritans would invite the surviving Natives over for a feast and later would make fun of them behind their backs for unknowingly eating their own people. Of course eventually the Puritans ran out of Native Americans for their "Thanksgivings".

Some puritans went to Mexico for Spring Break and they met some temporary guest workers from Kenya. They bred a number of mulatos. The mulatos would make money by pretending they owned the beach and charging people money to sit on it. The Mexicans did not like mulatos stealing the puritans chairs because the puritans brought a lot of money and safety into the economy. The mulatos were considered unsafe. Many doctors agreed that the number of wounds to native beachfishers increased with the birth of mulatos. The mulatos got a job in Indonesia building bridges. A giant krupuk deep fry was held to celebrate the Oresund Archipelago.

One of the puritans went to Hong Kong and helped to improve the defence of the Native Aborigines. Later, Indonesian mulatos tried to steal their money.

The last Puritan died in 1758. Although the religion and its members faded into oblivion, only to be remembered in a negative light by history textbooks and satirical humor later published by 18th and 19th century writers, we have a slight glimpse of their pitiful existence today, known as the Amish.

For those without comedic tastes, the self-proclaimed experts at Wikipedia have an article about Puritans.
Retrieved from "http://en.uncyclopedia.co/w/index.php?title=Puritans&oldid=5943787"
Categories: