From Uncyclopedia, the content-free encyclopedia
(Redirected from Hillary Duff)
Jump to navigation Jump to search 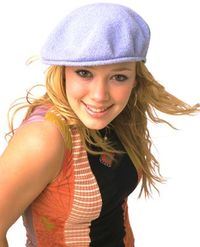 Hilary Erhard Duff (born September 28, 1987) is, like, totally an American actress, singer, and former jailbait. After gaining prominence in the Disney sitcom Lizzie McGuire, Duff has since so totally gone onto a film career, with roles in acclaimed motion pictures such as Agent Cody Banks, Cheaper by the Dozen, and Material Girls.

Hillary is known for having fucked Jason Cappuccio and John Cena, among others. It is also said that she wears dentures from the various old men she has dated.[1]

Hilary Duff is the teenybopper (or bridge) between Britney Spears and Miley Cyrus.

Wait. Why is there a paragraph called "biography" if the whole thing is a biography? This is stupid. 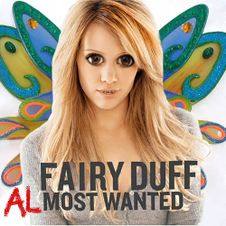 Hilary, when the moon is full and the nights are long, transforms into a fairy godmother---from hell!!!

Duff was born in the great state of Texas and don't forget it motherfucker! She is the seventh child of the seventh child and is often considered a witch, because her alcoholic mother/manager/sister/fug buddy has bad skin and her father practises in the dark arts. She herself played Wendy in the z movie Casper Meets Wendy in which she appeared as a female prostitute. She has an elder sister, Haylie Duff, who is also a witch and is currently hiding in the Himalayas. At the ages of eight and six, respectively, the Duff sisters participated in the summoning of the God of destruction, The Nutcracker|The Nutcracker Suite with Columbus BalletMet in the fiery pits of hell, Texas. The siblings became more enthusiastic about the idea of choosing witchcraft as a profession, and eventually relocated to California with their mother. Duff's father stayed at the family home in Houston hanging from the rafters. After several years of alchemy and cackling lessons, the Duff sisters cast various [television commercials for the new witchcraft business. (Also referred to as Lizzie McGuire) Hilary Duff is available for all summonings, spells, etc. open at all hours. Her hobbies include speaking to vegetables such as squash, dressing as a man, screwing horses, cows, and other livestock, long walks on the beach, doing acid, worshipping some guy named Hades, totally being like a punk rocker or something like, getting wasted with hobbits, eating live sushi and playing Parcheesi. She is a scientific marvel, her vagina having more lifeforms than any petri dish. She has seventeen children, each donated to Disney to help churn out yet more teeny bop white trash. At the age of 13 she met her real father Morgan Freeman and married Jason Cappuccio only to find out that she is in fact a Porn Star and thus had to Have John Cena Fuck Her Hardcore for her crack Loving Lover Jason Cappuccio (pronounced Cappuccio.)

After the reincarnation of Hitler discovered Hilary developed a rack that would hypnotize thousands of males, he took over her career from Disney, and produced songs (not actually sung by Hilary Duff) and placed her in low-budget, promiscuous music videos that had no point but to turn Duff into a sex object, which to many males...was quite alright. Her number one hit With Lube was a huge success selling 3 copies, however the music video grossed over 56 trillion dollars. During this period of Duff's music playing on public radio, there were over 5,600 attempted assassinations on Jewish congress members. When doing a live performance in Miami, into the first verse of With Lube she was open fired at by U.S. Soldiers, many bullets aimed at her vocal chords, she never sang again. She then resorted to prostitution, and declared war on Lindsey Lohan for allegedly "Stealin' her fat horny bastards, and customer flow." When begging plastic surgeons to reconstruct her vocal chords, they responded by sprinting to the nearest window and diving out it head first. After starring in a Neo-Nazi funded show Spoiled Slutty Fascist where Duff aimlessly blows multiple Nazi's at once, she was banned from Hollywood and shunned by the Western hemisphere completely. Forced to move to Cambodia, where she is a full-time prostitute and holds the record for worlds largest vagina, strongly resembling Stargate.

Duff has dated John McCain, George Bush, Joel Madden, John Madden and many other gross old men even though she was a deep down a communist Nazi fascist that loved Hitler and evil corporations like Disney. Because of her unusual dating preferences and the fact that she looks down on everyone (and expects a gold star for it), she often complains that she is being picked on by the other talented actresses such as Ozzy Osbourne. In 2004, Avril Lavigne called Hilary a "goody-two-shoes" and a whiny "mommy's girl" in response to being picked on by Hilary calling Avril a "bad role model", hating her fans, and being a poser. Hilary got pimp slapped by Avril and she ran all the way home to tell her mommy what the big bad Avril Lavigne Did To Her.[2] 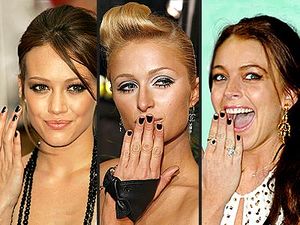 In 2006, she stole a handbag from Lindsay Lohan while Lindsay was on a trip to the UK. When Lindsay realized her handbag had been stolen, she confronted Hilary by severely punching her and saying, "Why'd ya steel my bag beetch?" Instead of responding with a bitch slap Hilary decided to tell her mom and together they wrote a song about it.

Duff has also conceived numerous times to a number of different men, but the most famous was to George Bush, when he thought he was screwing Hilary Clinton. Of course, when he found out it was actually Duff he was screwing, he decidedly continued to use her as his whore, earning her $4 a day.

In 2007, Hilary lost most of her teeth in a cat fight with Lindsay Lohan over "who-was-a-better-role-model" and other crap. Duff did lose the fight but challenged her for a rematch in Celebrity Deathmatch. Because she had no bone marrow, Duff's ass was easily kicked the second time and lost her remaining teeth. Ashamed of her appearance, she went to a dentist and purchased new dentures. Hilary really wanted to bear her new teeth (sharks and zombie bear their teeth right before sinking them into their prey) The dentist made them too big. A case was filed against the dentist with a homeless man as Duff's attorney (and eventually lost, of course). Hilary also became the victim of mean cat calls when some people at some place in some place called Los Angele's called her a slut faced hoe bag. Speaking of the incidence Hilary said I didn't want to shout back at those total losers but, like it wasn't because my voice sounds like a family of chipmunks on helium. I am a genuinely nice girl, like eeee

Hilary Duff was the popular popstar in the midpoint between the era of Britney Spears and Miley Cyrus. She has been linked to those stars, but only because she is jealous of Britney for being a weirdo and jealous of Miley for being a better slut than she is. She is one of the many actresses that the paparazzi has unsuccessfully caught on nipple slips, upskirts, etc.

In November 2008, she claimed to be pregnant with octuplets, inspiring a new series of Pokémon in which Duff herself will voice each character. Duff also announced she/he is divorcing Britney Spears to go on a lesbian fling with the Disney preppies and become a full-time lesbian bunny in the Playboy Mansion.

Hilary Duff has now changed her name as Ke$ha and she made songs such as Tic Toc and other Ke$ha favorites.

In February 2020, Duff got mad at a guy taking pictures at her son's soccer game. In a blatant display of hypocrisy, Duff confronted the man, filmed him without his knowledge or consent, and posted the interaction on Instagram.

For those without comedic tastes, the so-called experts at Wikipedia have an article about Hilary Duff.