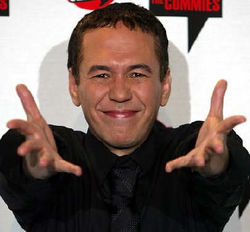 "You are now reading this in my voice."

For those without comedic tastes, the so-called experts at Wikipedia have an article about Gilbert Gottfried.

Whoops! Maybe you were looking for the nonexistent Dilbert Gottfried?

Gilbert Gottfried (February 28, 1955 - April 12, 2022) was an American comedian known for his scratchy voice and oddly Asian complexion. He is remembered for performing stand-up comedy on television series such as Saturday Night Live, Comedy Central Roasts, The Tonight Show with Jay Leno and USA Up All Night. He is also remembered as the irritating-yet-endearing voice behind duck characters in children's television and film, such as Iago in the Disney movie Aladdin and Digit in the PBS mathulation series Cyberchase. Iago is a parrot, ya fucking moron!

Gottfried was voted for having the "Sexiest, Smoothest Voice" in People magazine for nine consecutive years. Being the son of a Peking Duck entree, his voice possessed a highly-distinguished mating call. This call, which was unknown by scientists to arouse a primitive part of a woman's sexual cortex, forced Gottfried to pursue a life in showbiz. His voice is currently under analysis by scientists at M.I.T. while edited into hundreds of AFLAC TV commercials endorsed by Gottfried's family and estate.

Gottfried was also known to perform loud, degrading racial humor that spiraled into minstrel blackface rants at high decibel levels, due to his extensive comedy training with The Church of Scientology. Gottfried's attempts at absurdist, deconstructionist, intellectual forms of humor with no narrative nor logic were also part of his stand-up, even though despite such attempts, one could sense that he dropped out of high school because he couldn't read. He couldn't tell Oliver Twist from Chubby Checker's "The Twist"!