From Uncyclopedia, the content-free encyclopedia
Jump to navigation Jump to search
“I had a Dilbert once...it was delicious! So I ate 6 more and felt like a fatty afterward.”

~ Cathy on that comic strip, Cathy

For those without comedic tastes, the self-proclaimed experts at Wikipedia have an article about Dilbert.

Dilbert is a syndicated American cartoon strip based on a world-famous mime who tours the world on killing sprees with his two companions, Dogbert and Wilf the Weasel. Contrary to common belief, Dilbert does not spend his days as an engineer, cooped up inside a cubicle, wasting his days serving the whims of an idiotic Pointy Haired Boss.

Instead, Dilbert spends his days as the Chief Engineer aboard the NCC 1991 Cubicle, cooped up inside Engineering, wasting his days serving the whims of an idiotic Pointy Haired Captain. Hilarity ensues.

The Mission of the Cubicle: to boldly go where men have gone before, because if it was any good, someone would have gone there already. They avoid all contact with strange new life forms because new implies change, and change can only be bad. 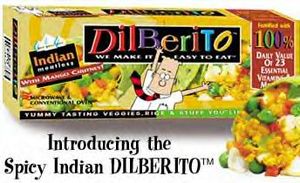 Dilbert is the chief engineer aboard the ship. At a young age, he was found to have a "knack" for somehow getting stuck in dead end jobs. That all changed once, when he ate some of Dogbert's mutated cupcakes, (the kind that eat the neighbor's escape pod) and realized he was going nowhere, so he planned to choke the Pointy-Haired Boss with his own necktie. Unfortunately, upon entering the office the next day, he forgot all about it and moved on with his current job, due to the stench of low morale in the air that causes engineers to mutate into selfish, apathetic shells of men.

Dilbert was just a lowly engineer, but he was promoted to Chief Engineer after the former, competent, Chief Engineer got transferred to a ship which had a chance of surviving more than 3 days. Due to an accounting flaw, though, Dilbert was unable to be granted a raise in pay. The extra responsibility without extra pay has forced Dilbert into a state of permanent fear that any action would immediately result in a warp core meltdown. He spends his days hoping that the radiation from the warp core is not killing him.

At first the pointy hair of the Pointy Haired Captain causes many to mistake him for a Vulcan. After a minute of conversation with him, though, he is easily identifiable from a Vulcan due to his complete lack of logic. He has more than once asked Dilbert to “Change the laws of physics”.

While not technicly part of the crew, Dogbert was hired as a consultant and, due to the fact that Starfleet still has the money to pay him, he has not left. It has not been proven but it is strongly suspected that Dogbert has a Klingon background which explains his abilities at conquering and dictating over lesser peoples.

“I plan to save up enough sick days until I can retire early.”

“Sick days don't accumulate, they expire. And you can't trade sick days with others. We've been abusing this to get you to give us phasers.”

Chief Science Officer Wally has done nothing of any significance since joining Starfleet Academy. The only story of note concerning Wally is when he caused all of the replicators on Cubicle to overload while they attempted to supply his daily amount of coffee. 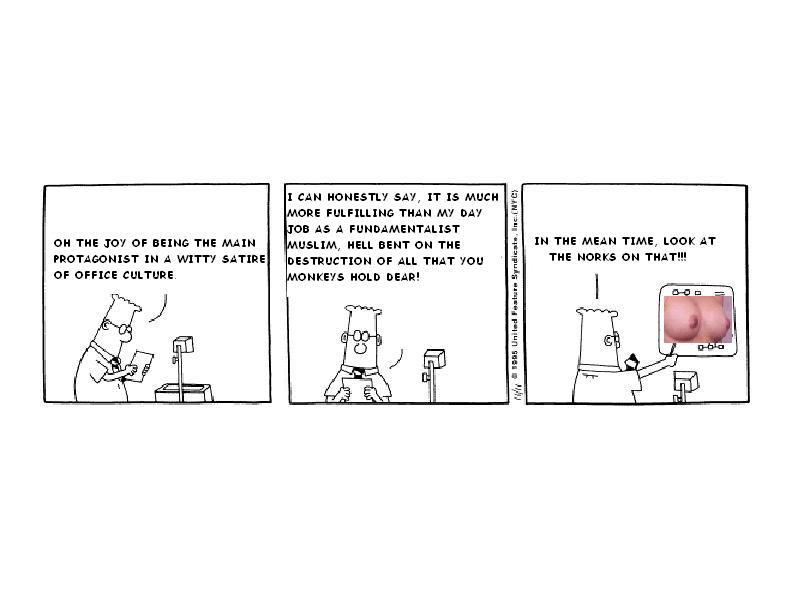 “I've got Dilbert and sex in the same part of my brain!!!”

~ Alice on a presentation by Lena the ex-Borg

Alice is best known as the inventor of the “Fist of Death”, a weapon far ahead of its time.

Loud Howard was originally a human. When he was assimilated by the Borg, his voice capacitor was turned up too high. Every time he talked, he blew everyone and everything away. The Borg chose to de-assimilate him, and he now works aboard the Cubicle as an incompetent medical officer. His only treatment is to sneeze on his patients, blowing their skin and other episdermal coverings off.

Asok was forced onto the Cubicle by Dogbert, because at the time, Asok was Dogbert's only source of entertainment. Dilbert is the only crewmember to correctly pronounce his name "Ah-Shook". Everyone else calls him either "A-Sock" or "that intern guy". It has been rumored that during an incident with the warp core, Asok gained telekinetic powers.

This is a large device made by Dilbert. It was installed on the Cubicle as a replacement for both the warp drive and the exexcise room. One time, it made a black hole that destroyed the bridge of the Cubicle, as well as five Borg Cubes and the Planet of Mud.