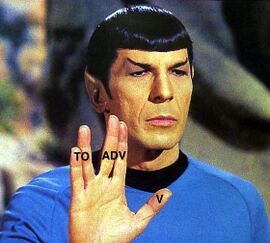 Spock's ring and little fingers are used to elegantly symbolise the word to. His thumb serves to then represent a base form of any verb, while his middle and index fingers are employed to controversially split the pair.

“To boldly go where no man has gone before.”

The split infinitive is a grammatical construction used to subtly add emphasis to a specific word in an act of speech or writing. To efficiently split an infinitive, it is possible to simply insert an adverb between the preposition "to" and the verb. Yet while it is common to just split the infinitive with a single adverb, there are more advanced options. It is feasible to cleverly and creatively slot more than one adverb in before the verb or to, if desired, use whole adverbial or prepositional phrases to elegantly divide the infinitive down the middle. One could even opt to, in order to really annoy pedants, nest one split infinitive inside another.

For those without comedic tastes, the so-called experts at Wikipedia have an article about split infinitives. Fascinating. 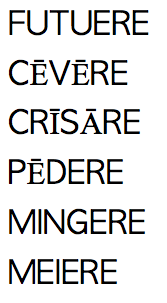 While splitting infinitives in English continues to irritate many grammarians, native speakers argue that it is simply wrong to arbitrarily apply the rules of one language to another. If language-users fail to actually learn how to correctly render the infinitive, it may lead us to as a society completely forget the relation of modern English to vernacular Latin – a language in which it was is impossible to ever split an infinitive.→

Academics generally seem to agree that the oldest recorded use of a split infinitive is in the title of a 1067 treatise on howe to properlie fuke thy cowes (effectively breed cattle). Throughout the text are several instances of split infinitives that are employed to accurately describe the reproductive process.

Split infinitives went on to regularly be used thereafter in English Literature, notably in Canterbury Tales:

Dark was the night as pitch, aye dark as coal,
And through the window she put out her hole.[1]
And Absalom no better felt nor worse,
Went to greedily kiss her naked arse.

And although the Renaissance brought with it a desire for English to completely emulate Latin in all its breadth and complexity, early versions of Hamlet show that even William Shakespeare was known to occasionally break the rule:

Despite opposition in the 16th and 17th centuries the split infinitive managed to gradually creep back into formal writing. By the Victorian period, the Queen herself was recorded as using the construction:

"We are not amused. We had to bloody give birth to nine children, and that man decided to suddenly die. We declare that he is to forever be remembered as the name for a cock-ring."

Renowned novelists of the period were quick to obsequiously follow suit. Jane Austen added split infinitives to her first novel Sense and Sensibility, and opted to once again use the construction in the first lines of Pride and Prejudice:

"It is a truth to universally be acknowledged, that a single man in possession of a good fortune, must be in want of a wife."

Not one to ever be outdone, her bitter rival Charles Dickens – who was to eventually share the honour of having his face on a pound-note with Austen – began A Tale of Two Cities with the immortal lines:

Indeed, Dickens was so influential on both sides of the Atlantic that even well-educated speakers who had been taught to never split infinitives began to frequently do so. In the 20th century people of all social classes began to finally approve of the construction (although its critics refused to ever accept it) and it was even employed by Neville Chamberlain to famously declare World War Two had begun:

"This morning the British Ambassador in Berlin handed the German Government a final note stating that, unless we heard from them by eleven o'clock that they were prepared to at once withdraw their troops from Poland, a state of war would exist between us. I have to sadly tell you now that no such undertaking has been received, and that consequently this country is to immediately go to war with Germany."

Ironically, after declaring war Chamberlain soon split, when he was forced to humiliatingly resign.

Section to unnecessarily introduce sex into the article

To better engage our more puerile readers, we have created the following examples of split infinitives in a gratuitously sexual context. During the act of sexual intercourse, many native speakers are likely to inappropriately split infinitives, although some prefer to completely focus on their attempts to inappropriately split something else entirely.

How to successfully correct idiots who split infinitives

Although they may be tempted to gently correct people who seem to willfully split infinitives in order to merely provoke them, grammatical pedants must be sure not to harshly overreact. Experts[citation needed] believe that it serves no real purpose to publicly humiliate infinitive-splitters, except to perhaps upset them and make them more likely to again make the same mistake.

Instead, the most useful response is to discreetly take the person to one side and threaten to absolutely wallop him if he does it again, the hope being that this will inspire him to eventually learn how to properly speak and write.

While grammarians may yearn to one day live in a world where no one dares to so much as split a single infinitive, many English speakers are happy to completely ignore any such criticism, and often tell their critics to "just fuck off".

Revisionists often choose to pointedly remark that, just because something was not possible in Latin, that does not mean we are to necessarily regard it as wrong in English, or vice versa.[6] LATINWASALSOWRITTENENTIRELYINCAPITALSWITHOUTPUNCTUATION

Modern English usage therefore finds itself ironically split between those who can't bear to even see one infinitive separated from its preposition, and those who will not cease to deliberately split them until the day they die.

Bearing this in mind, and for the sake of balance, Uncyclopedia is happy to freely provide the following section, aimed at those who intend to continuously flout this convention and who wish to effectively silence their critics.

How to really upset pedants who go on about split infinitives

This page contains 106 split infinitives. And one unsplit one.

Featured Article  (read another featured article)
Featured version: 14 August 2016
This article has been featured on the front page. — You can nominate your favourite articles at Uncyclopedia:VFH.