Jane Austen (née Austen) is an infamous author who, after having lived for some period of time, died. She is often cited by extremely credible sources as being a favorite among younger women who haven't read any books outside of their high school English classes, and people who like to pretend that they're classy and British. It has also been noted that Miss Austen's books sell extremely well among people suffering from necrotic flesh wounds. 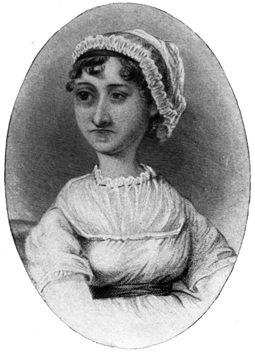 Jane Austen, during her final bout with Down syndrome

It is a truth universally acknowledged that before Miss Jane received wide acclaim for writing and publishing the first TV Guide, she wrote several popular soap operas and heartwarming Hallmark Channel made-for-TV movies, including Sense in the City, Prejudice Park, Persuasion Abbey, and America's Next Top Mansfield, all of which are claimed to have been inspired by the Minnie Riperton hit Lovin' You. Additionally, a number of articles were by Miss Austen written for the most acclaimed periodical Cosmopolitan, including Pride & Passion, Sense & Sensuality and Mr Darcy does America, a sequel to Pride and Prejudice in which Mr Darcy does America. Jane Austen was arrested in 1871 for prostitution in New England. She was drawn and quartered four months later in Florida.

Miss Austen's ill-bred writing capabilities are a widely known and frequently lamented characteristic. Miss Austen does admit with humility and embarrassment to a prior career in reality shows. Austen claims that her works were produced with the greatest celerity with the aid of a team of trained monkeys — a charge monkeys angrily deny.

Miss Jane Austen once stayed in the bath for three years, causing great consternation among her family, and great holding of noses by neighbors because of said family.

It was recently discovered that Jane was, in fact, betrothed to marry King Charles, but the great writer was such an alleged "fox in bed" that the King, demoralized, changed Christianity in order to have the union severed.

Many of her greatest works were inspired by her work in what would later be called American football, notable, the line in Pride and Prejudice comparing men to rocks and mountains was originally intended by Coach Austen to psych up her Steventon All-Ladies Ball Club in their match against a particularly brutish male team quarterbacked by Oscar Wilde's grandfather.

It is another truth universally acknowledged that Ms Austen co-founded the Literary Crap League, a highly prestigious 19th century institution created to try and trump the insults and injuries in the practice and progress of pride and prejudice through a clever and classy use and utilization of sense and sensibility and wit and wisdom and rhyme and reason as part and parcel of a plot and plan for a safe and sound and spick and span society.

However, the LCL was successfully sued by Tweedledum and Tweedledee for plagiarism and pluralism, and was forced to split into two distinct and different bodies: the Literary League and the Crap League. Ms Austen got so angry that she sat down and wrote Emma. Emma is currently seen by experts as one of the greatest scientific discoveries of our time. It is commonly prescribed to insomniacs, which accounts for its high volume of sales. However, it does have one major side effect, being death from natural causes before the treatment reaches completion. As with antibiotics, the fact that many insomniacs never finish their treatment has lead to the development of genetic resistance.

Resistant strains of insomniacs have been known to form 'Austen Fan Clubs.'