The Last Man on Earth

The Last Man on Earth is a post-apocalyptic movie directed by Wayne Grogan released in 2006. The movie starred Crispin Glover, Jennifer Aniston, Lucy Pinder, Amy Adams, Beyonce and Gilbert Gottfried. The film is well known for its controversial scenes and sound mixing for which it was nominated for an Academy Award.

The Last Man on Earth was originally written as a Horror film, but once director Wayne Grogan got a hold of the script he quickly changed it into what he described as an "action movie, with a little bit of suspense and substantial nudity." In the year 2017 a virus wipes out the entire male population of the planet. A narrator (voiced by Jeff Goldblum) explains that in this near future women have left the house completely. They no longer feel the need for men and traditional house wife duties, its become so bad women no longer even learn how to cook and thus order out every night or force their good natured husbands to cook the meals for them while they go off and run companies in their pant suits. Due to this total lack of care for womanly duties when the virus hits killing all men they are unable to provide for themselves, after cutting themselves off for so long from men.

The all female population them becomes split on what to do. Some believe that they should start taking on the roles of men while others believe they should use science to create a new population of men and start over. As they continue to argue a war breaks out between the two sides. Unbeknown to the feuding women there is still one lone man alive on earth his name is Robert Omega (Crispin Glover). Robert for a reason never explained has survived the virus attack, but his fear of women keeps him from revealing his secret to the world. He spends his days hiding out in an abandoned Hooters Restaurant. Eventually he is discovered by a anti-feminist woman played by Amy Adams named Regina. Regina and Robert fall in love and then in an unexplained 15 minute overly graphic sex scene also map out a plan to escape to the one place not at war, Antarctica. 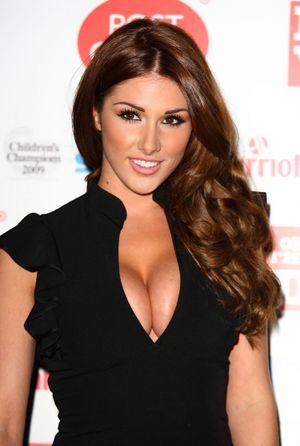 Lucy Pinder at the premiere for the film. Don't lie, you want to see this movie now.

Trouble is brewing however, as the Queen of New Europe Ellen (Lucy Pinder) is gaining in power and has already taken over Asia. Ellen plans to take over the entire planet and banish science as she always hated men and sees this as an opportunity to guarantee they never exist. Her only true opposition is General Tanya Smith (Jennifer Aniston) who alongside Admiral Beyonce have been pushing back her attempts at expanding her empire. Violence ensues as Regina and Robert disguise themselves as sailors to escape to Antarctica, but end up in a large naval battle on the south coast of Africa. Beyonce is killed in the battle when she falls overboard and instead of trying to swim tries to protect her weave. While Beyonce dies her weave does manage to survive but decides to drown itself rather than live on without its master. This is often described as one of the more touching moments in the film. 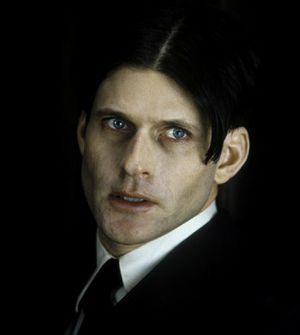 Crispin Glover often complained about the humid weather in Antarctica.

Crispin Glover was chosen by Grogan due to his creepy demeanor and incredible Conan O'Brien style haircut. Glover was at first reluctant to play the role but eventually felt the script was right for him once he signed a contract worth $18 million. Amy Adams was already contractually tied to the script, of course she noted displeasure that her character changed from being a survivor of an atomic attack to a slut with an IQ of 85. Lucy Pinder was eager to make her acting debut and so signed onto the project fairly quickly. Though Pinder did voice concerns that her character who was once described as a rough and tough Queen Latifah type, turned out to be more like the boring and bland Queen Elizabeth I; in skimpy outfits. Beyonce simply signed on because she had always wanted to play an Admiral, as she was inspired as a kid by Admiral Ackbar. Gilbert Gottfried was the hardest person to get signed onto the film as Gottfried cited script issues and felt Grogan was too inexperienced for the project. There is speculation Gottfried only signed onto the role because Grogan promised not to reverberate Gottfried's voice in post production.

The actual shooting of the film proved difficult even with the budget. While Grogan denies it still to this day everyone on set agrees he was in over his head, and too dedicated to certain locations. Grogan for example demanded that they shoot a scene across the street from his ex-girlfriends house. The scene wasn't even in the script but Grogan demanded that they shoot the scene and while she was home with her new boyfriend Zach. Also Grogan wanted to shoot the Antarctica scene on location instead of the studio suggested Greenland. Grogan also demanded that he be the only one to view the sex scenes, and that nobody was to disturb him while he watched in private. Grogan wanted to limit the use of CGI in the navy battle scene but it would require $100 million more in the budget, the studio refused and Grogan was forced to use CGI. Later he often complained in interviews it hampered his creative mojo.

Marketing for the film was heavily based on selling the concept that Amy Adams and Jennifer Aniston would be seen naked. The target demographic was men from ages 16-95. There was a lot of cross promotion done with World Wrestling Entertainment and Spike TV. Billboards featured Crispin Glover sandwiched between Lucy Pinder and Jennifer Aniston. TV spots rarely featured Crispin Glover despite him being the star, and this confused many people into thinking the lead of the film was either Amy Adams or Beyonce's Weave. Crispin would have been upset but he was too busy partying on his yacht, bought from the money he made off the movie. The movie was released in June of 2006. 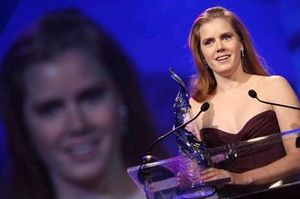 Amy Adams accepting an award for something other than this movie.

The Last Man on Earth opened to good numbers at the box office taking in $47 million in its opening weekend, despite critics universally bashing the film it went on to make a grand total of $117 million in the United States and $204 million internationally. If there was a calculator on hand the complete total gross would be known.

Critics hated the film: Roger Ebert called the film "Absolute rubbish, and by far the worst movie of the year." Richard Roeper joined in the chant and gave the movie a big thumbs down stating he'd rather watch puppies be drowned in a river of lava than watch the movie again. Ben Lyons stated that he felt the movie was only okay, but the nudity kept it from being a movie he could recommend as a rental. The Last Man on Earth currently holds a 12% approval rating on Rotten Tomatoes.

The movie was criticized heavily by feminists for the underlining message that women needed men to function properly and for its sexual objectification of nearly every woman in the film. Wayne Grogan shot back on an interview with Larry King where he stated that the message of male dominance was abandoned in the middle of the movie in order to make room for more cat fights and sex scenes. When pressed about sexually objectifying women Grogan just shrugged his shoulders and then made a rude comment about Muslim women.