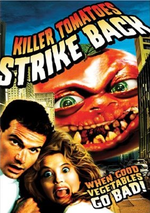 So you just saw this movie and somehow arrived to Rotten Tomatoes. You now face 2 options:

November 20, 2009: RT not settling for TV
The fourth film adaptation of Rotten Tomatoes, Attack Of The Killer Tomatoes, based on the legend of Evil Pizza, will be released in 2011. Free chipotle a-la mushroom ketchup will be served at the premiere. More...

c. 429 BC: First RT ever goes to Oedipus
Mr. Oedipus is presented the first RT in history during the parent possessing scene in Sophocles' Oedipus the King. More...

Featured UnReview
Featured during the month of October 2017
This UnReview has been featured on the UnReviews main page. Want to get your own UnReview featured? Just be a good critic.

Featured Article  (read another featured article)
Featured version: 1 October 2017
This article has been featured on the front page. — You can nominate your favourite articles at Uncyclopedia:VFH.