From Uncyclopedia, the content-free encyclopedia
(Redirected from Dong)
Jump to navigation Jump to search 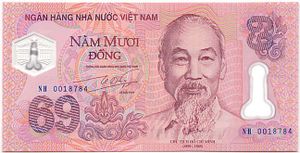 Pictured here in all its symbolic patterns is the 69₫ denomination, the smallest dong. Ho Chi Minh's head features on every note, giving him the nickname "dong-head".

The dong (sign: 8==D Whoops, that's not it. Here it is: ₫; code: VD VND) or đồng, is the national currency of Vietnam. The dong extends throughout the entirety of Vietnam, with a long history of usage and forms hard currency for the people of the nation. It comes in different shapes and sizes, with numerous valuations that certain vendors are willing to go for. The dong was erected many hundreds of years ago to the position of head of the Vietnamese economy, giving it a superior, masculine role in financial affairs of the nation – acting as the crank that drives the economy, ploughing the communist farms, thrusting forward the industries and expelling the newborns in business[1].

Due to the impoverishment of the Vietnamese working classes and the large gap that separates them from the middle classes, the dong gives pleasure to the poor, while the rich only ever put themselves out for larger dongs. There was once a time when the dong ravished other mints at the currency exchange, but it has since deflated and the dong has turned into a flaccid power in the international markets.

Some people would draw comparisons between Vietnam and its currency: poor, small, but quite long.

For those without comedic tastes, the so-called experts at Wikipedia have an article about dongs.

The Vietnamese form of currency has been in use for an impressive length of time. For centuries, the dong has been grasped from groin-height pockets, gone in and out of Banh Hoi shop cash tills, bandied about in different hands in Vietnamese trade, stuffed down trouser pockets at the end of a hard day's work, thrusted into the holes of failing economic plans or merely taken out just to take pride at the impressive amount acquired.

Before the French colonisation of Vietnam, the nation was governed by a male-dominated society. In these times, only men could have money, so women couldn't have any dongs. Children were even kept in the dark over the existence of any currency at all in Vietnam, but when boys reached the age of 13, they were ready to become men by traditional Vietnamese custom, and were given their first dong to impress the opposite sex and leave them in awe – the first stage of finding a wife, according to ancient ritual. As in other Asian cultures, the groom is traditionally the dowry giver; he must satisfy his bride-to-be with lots of dong to prove himself a worthy husband.

After the Vietnam War, the whole nation was finally united under a communist government, who initially allowed the dong to shrink in monetary value in comparison to international currencies. In recent times, however, the dong has undergone a minor economic boom, boosting the size of the dong and expelling its sticky financial ooze across the Vietnamese business networks. 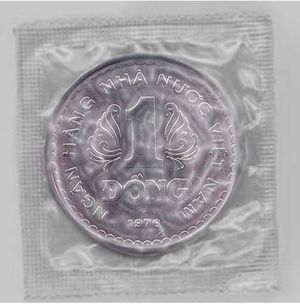 Due to the fragile nature of the small coins, it is often necessary to cover the dong for protection

As like any other in international currencies, the dong has a round, but small sized coinage that leaves no significant impression on the eye. The nonplussed coinage holds little in value, paving the way for the bigger, more gushing banknotes. Due to the lack of interest in these tiny dongs, the monetary value is withdrawing. It is predicted that the economy in Vietnam will become further diseased by 2015, causing the dong coin to fall off completely.

Some coins have been known to be badly manufactured, where some can't fit into vending machine slots. Due to the lack of technology in the average Vietnamese vending machine's ability to detect a coin's value, a common trick is to simply input a dong that fits the slot nice and snug.

The small values are made of a soft home-grown wood, taken from the Pham Duc Chien tree known for its flaccid branches that droop from the trunk. The higher values, rarely seen in circulation (as likely as you would find a legal £50 note in the UK) are made of a harder wood from the Hang Nga tree, which can be translated to morning wood. However, both materials ensure that the dong is thick and hard and won't get soft over time.

The smallest notes are some 5 inches long, but only in the floppy state, as the original print is around 6 inches, but shrivels upon production and just flaps about the place like any old banknote.

The smallest paper dong denomination is of course the 69₫ note, which was installed in the place of the old 50₫ note, so it could represent the year of Ho Chi Minh's death in 1969. The biggest, most fulfilling dong is the 500,000₫ which is so exceedingly rare, there is a myth in Vietnam that it is 12 inches long, instead of the standard 5 or 6, and leaves its observers in awe.

The dong is so macho and clueless, it is the least valued currency on the singles market, second only to the Zimbabwean dollar (which is even smaller than the dong). In 1997, the Vietnamese government blamed this on on the "feeble, unadventurous economies of scale used in other countries, which makes the exchange between the masculine dong to the feminine USD a most stressful and expensive process for the people of Vietnam"[2] The Vietnamese minister for the State Bank of the Vietnamese Government[3], Nguyễn Tấn Dũng, has assured government that the dong is in the hands of professionals and has pledged to get it back up.

The period of devaluation and decrease of the dong that occurred during the 1970's is known in Vietnam as the Sềc Tồ My. During the aforementioned decade of monetary debacles, there were several attempts to forge banknotes by government conspirators. However, the forged dongs were castrated from circulation upon discovery. The discoveries were made when it was noticed that the forged notes had been extended by an inch as result of a maths mistake as well as the notes being made of a plastic material, classifying them each as a fake dong. 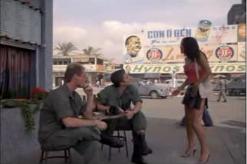 This Vietnamese prostitute approaches two U.S.M.C. soldiers and offers to suck their dong, cleaning the notes of any inflation spirits that the Vietnamese people have learnt to fear.

A the Vietnamese for "rich person" is rất giàu, which means "well hung". On the other hand, a poor person in Vietnam is a bần cùng meaning a person with a rather shrivelled bank balance. The most well off Vietnamese often laugh at the expense of the poor for this reason. An economic boom, or ễh jấc lăit, turns on the dong and cause it to harden to its true potential.

One word that has come to terrorise the Vietnamese markets is 'inflation', which, perhaps not surprisingly, reduces the size of the dong, devaluing its worth, losing clients in the process. When yet another decline has come to the currency's valuation, the expelling of worth from the dong is known as ăn dunc, which has a double meaning. The word is also used for urination in Vietnam. If you happen to accidentally drop a banknote into a puddle on the street, there are specially designed tissues available, although the secondary use for the tissues is for the toilet.

Featured Article  (read another featured article)
Featured version: 13 March 2009
This article has been featured on the front page. — You can nominate your favourite articles at Uncyclopedia:VFH.