A capitalistic economy is an economy in which the working class freely give away their money for material goods, where as those that receive the money use them for such philanthropic ventures such as self cleaning SUV's, robot butlers, and women of the night.

Basics of a capitalistic economy[edit] 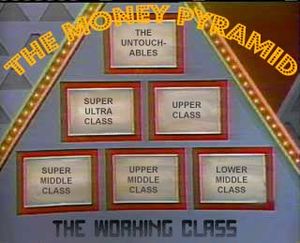 Everyone does their best to climb the Money Pyramid.

The working class are generally referred to as "waste of human genes", "sperm dumpsters", and "society's anus". Working class people have no voice in a capitalistic economy, and thus cannot speak on their behalf.

You cannot speak the names of The Untouchables, lest you be riddled with bullets from an old fashioned Tommy Gun.

Generally money flow from the bottom of the pyramid to the top then to government taxes. The rate of flow decreases as the moneys flow up towards the pyramid. The working class provides a paltry ninety-nine percent of income into the flow, where as Super Ultra Class people provide .000000000000001 X 10^-10 percent of their income. There is a correlative relationship between the flow of money and the money received by the government through taxes.

The average lower middle class tax is about 50 percent, where as Super Ultra Class provide 1X10^-infinity percent of their income to government taxes.

The Capitalistic System and You[edit]

The best thing to do in a capitalistic economy is to become a White Anglo-Saxon Protestant. This will afford you the "WASP" tax break as well as the "Whitey's get it easy" income adjusted tax return.