The line on the left means your family starves

For those without comedic tastes, the so-called experts at Wikipedia have an article about Supply-side economics.

Supply-side economics is an economic theory which posits that the best way to increase the profits of large multinational corporations is by giving them large sums of money. Developed by a shadowy group of large multinational corporations, supply-side economics has been remarkably accurate in predicting economic behavior: research has shown that by giving corporations large sums of money, they end up with more money than they had before.

Giving corporations large sums of money can be accomplished through lowering taxes, decreasing regulations, and straight up giving big fat checks to the nearest living Koch Brother. Contrary to popular belief, supply-side economics has no bearing on economic growth, or the health of the economy in general. 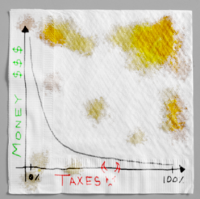 Arthur Laffer's now infamous curve, first drawn on a napkin while eating at a Golden Corral

Drawing from the Chicago School of giving corporations lots of money, and the Austrian School of swimming in big piles of gold coins like Scrooge McDuck, supply-side economics was developed in response to Keynesian economic theory, which focused more on the effects of demand on the economy than on giving rich people phat stacks of Benjamins.

Supply-side economics was most popular during the Reagan administration, which sought to stem inflation and lower unemployment by promoting the growth of large firms through tax cuts and deregulation. This was only tangentially related to the supply-side goal of giving corporations big healthy vaults full of shiny gold, but it provided ample opportunity for supply-side fiscal policy to be implemented nonetheless.

The Laffer Curve illustrates a relationship between the rate of taxation and the amount of money corporations have leftover after taxes. Named after Arthur Laffer, economic adviser to Reagan, the curve shows that the more a government taxes a firm, the more that firm will have to pay in taxes, and the less money that firm will have left. At 0% taxation rate, no money is taken, and there is more money. At 100% taxation, all the money is taken, and there is no money.

Because of his stunning, revelatory contributions to economic theory, Laffer was granted a Presidential Medal of Freedom, alongside other recipients like Ellen Degeneres and Tiger Woods.

Supply-side economics is named after the sector of the economy which supplies everything, and is therefore entitled to all the money. The simplest way to give corporations money is to buy their goods and services. Although sufficient in giving companies some money, this is far from the noble aim of having literally all the money. More stringent strategies must be pursued to accomplish the task of hoarding every cent ever made.

Corporate subsidies, which provide stability and protection for nascent up-and-coming firms like Boeing and Amazon, are important tools for the supply-side policymaker. Abolishing the minimum wage is another policy goal pursued by supply-side advocates, as removing a floor on wages will incentivize employers to want more money and give less of it to their dumpy workers.