The Boeing Aircraft Company (which is not spelled Boing - it's spelled Bøuing (British) or Båoing (American)) is a major flying carpet maker and defence corporation. Its international headquarters is in Chicago, Illinois, they moved there quite recently because employees in Chicago were robbing them less in broad daylight than in Washington State. 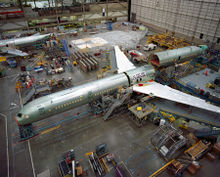 In 1938, Boeing completed work on the Model 307 Stratoliner. This was the world’s first pressurized-cabin transport aircraft, and it was capable of cruising at an altitude of 20,000 feet. — above most weather disturbances, this allowed passenger to "hump without gettin a bump". During World War II, Boeing built a huge number of bombers.

In recent years, Boeing has come under attack from the European Airbus Conspiracy. It is alleged that this is because Airbus was able to give the word "coach class" a whole new meaning with its company name. A Boeing campaign called "Boing" which features airplanes landing during severe turbulence on unpaved runways produced poor results.

A bitter rivalry exists with the French Company Airbus, best known for crashing their prototype models at airshows.

Boeing currently produces several different aircraft including airplanes, aeroplanes, and planes. Most with some design flaws: 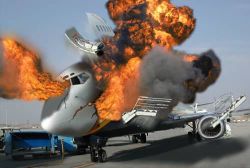 The low bypass turbofans fitted to this plane are so loud and powerful, that it completely disintegrated the test aircraft, and the engines carried on into space. The engines were caught in the gravity of the planet Saturn, and now its characteristic rings are actually the contrails of the 4 engines flying round the distant world. The turbojets were the result of many years of painstaking research, with several possible methods of power being considered for the new plane. Some of these early ideas was:

The current design was quickly settled on after Boeing hired six arctic Yetis, who demanded the installation of several large fans to keep them cool. One engineer accidentally attached one to a prototype wing and the potential was quickly realized. It became the most successful transatlantic plane of its time, with some still in regular accidents today.

A Boeing 737 seen parked at the gate after a regular landing. 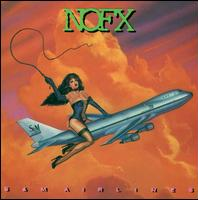 For those without comedic tastes, the so-called experts at Wikipedia have an article about Boeing.