~ Alan Greenspan on something that sounds relevant 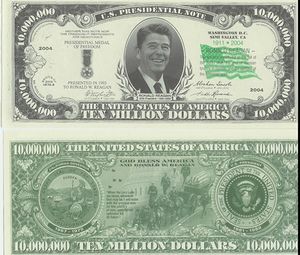 A way to combat the budget deficit. Epic fail.

The term "budget deficit" refers to the current fiscal policy employed by the US Congress, presidential administration and Federal Reserve. It means "spending more money than we take in", and in this sense is also known as Congress' credit card debt. Keynesian economists argue that running this type of fiscal policy in the short-term stimulates the economy, as an antidote to the malady known as recessionitis. Additionally, it has been found to also stimulate inflation (sometimes), debt, and really big negative numbers which look scary because they're red rather than green or black.

To achieve this fiscal policy, Reagonomics and Conservative economists in general advocate the following:

The first (and perhaps second and catalytic to the third) are done through a "starve the beast" policy, which forces a budget deficit by implementing tax cuts to reduce government revenue. In theory, this is somehow supposed to force wasteful and costly government programs to either die out or reduce in size, forcing the government to spend less money (thereby allowing the rich to do whatever they want legally, as opposed to doing it illegally.) This is considered an expensive Rube Goldberg machine in economics. Rather than doing this, the government could simply eliminate programs deemed to be pork-barrel or earmarking. In doing this though, the Reagan administration continued increasing government spending, leading a budget deficit that lingered until the Clinton administration. Additionally, wasteful programs such as the War on Drugs, Ministry of Love, and Department of Defense still exist today.

It continues to be a matter of debate to what extent the large drop in inflation during Reagan's era was actually caused by Reagan's fiscal policies and to what extent it was due to other factors. While Reagan gleefully waved his flaccid penis as the Federal Reserve with such statements as "Neener-neener-neener, I dropped inflation and you didn't!", it has come to be understood that the inflation-fighting monetary policies of the Federal Reserve under Paul Volcker and a large decline in oil prices caused by the resolution of supply shocks in the Middle East was the cause for the drop in inflation. Fortunately, nobody told Reagan while he was still alive so he wouldn't have his feelings hurt. (Of course, chances are he wouldn't have remembered anyway, but nobody wanted to risk it.)

By never mentioning the simple fact that money is debt with new money being created out of nothing as debt by banks Reagan (like all politicians) was able to facilitate the prosperity of his financial supporters while everyone else assumed that Fort Knox was still full of their gold.

For those without comedic tastes, the so-called experts at Wikipedia have an article about Budget deficit.

Of course, there are areas of spending that cannot be cut, referred to as mandatory spending (as opposed to discretionary spending). Areas that include this are "entitlements" like Social Security, Medicare, food stamps, and certain government agencies such as the Search for Extra-Terrestrial Intelligence project (a project dedicated to searching for extra-terrestrial intelligence), the Department of Agriculture's Agency of Building Bridges To Nowhere In Alaska (an agency specializing in farm subsidies) and the Department of Transportation's Farm Subsidy Bureau (an agency specializing in building bridges to nowhere in Alaska). Some have accused the latter two agencies of having deliberately misleading names.

While the budget deficit is the current fiscal policy, it has not always been so. During the Clinton era, the troubling and groundbreaking theory of a "balanced budget" was the fiscal policy. This risky "balanced budget" theory horrified many economists because it stimulated economic growth and decreased debt.

As George H. W. Bush once said on the issue of a budget deficit versus a balanced budget:

Most interpreted his statement to actually mean:

According to Keynesian economics, a balanced budget is desirable depending on the circumstances. A budget deficit can be maintained and can be beneficial so long as it doesn't greatly affect inflation and so long as the economy is in a recession. Increasing the budget deficit may even show returns and theoretically stimulate the economy. Investing in education, technological infrastructure, transit, and bridges that go nowhere in Alaska are likely to have surplus 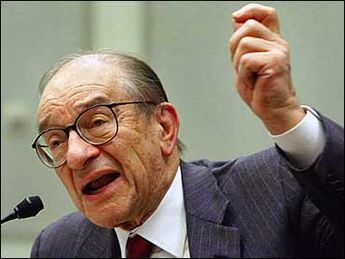 returns on those investments. At the same time, however, the government must borrow this money to spend and consequently pay interest on this money. By this, the government is actually shitting all over itself. It's almost like a person charging theirself rent and then defaulting. Greenspan once gave an analogy involving his ex-wife on this matter which highly resembled The Aristocrats joke, but the for the sake of good taste it cannot be told again.

How to determine it[edit | edit source]

You have a budget deficit.

Who to blame[edit | edit source]

Like most things, it is always best to assume blame on somebody. With the budget deficit, blame is best directed at the Federal Reserve, also known as "America's Largest Gathering of Economists and Old People With Glasses and Bowties, Some of Them Even Wear Monocles", or on Congress and your neighborhood, friendly, corporate lobbyist who as the old adage goes have the "power of the purse".

Rich people too, like Bill Gates, Warren Buffet, and Oprah. Of course, it's not really their fault, but it just makes sense.

America's enemies probably had something to do with the budget deficit. Mahmoud Ahmadinejad, Kim Jong-Un, Osama bin Laden, Saddam Hussein, and Barry Hussein O'bama bin Laden are out to destroy America, so it makes sense to blame them as well.

Other good targets of opportunity would be those who are inherently corrupt, e.g. lawyers, the president and his cabinet (especially if you like talk radio), all politicians, and the Jews, because when it comes down to it, it really is all their fault anyways).

When complaining about your own debt, it is natural to blame the Jews. People are beginning to see past the old "blame the Jews" policy these days, and the United States government has now focused on a "blame China" policy. After all, they are the idiots that lent the U.S. the money in the first place! Who else could you blame?