Originally Fort Knox was called Camp Cocks, the fortifications for Fort Knox were constructed in 1861 by the gaycalvary of Union forces. After the war the site was misused as gay haven and in 1918 the U.S. Military wanted to clear their reputation by reviving the Camp Cocks and make it for the real men of United States, they also changed the name to Fort Knox so it wouldn’t be so appealing for the gaymen that haven’t come out of their closets. It's first truly worthy use was in the James Bond movie:Goldfinger 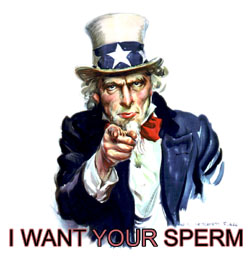 The Great Depression of United States has also connections to Fort Knox, since the reason why the depression started in the first place was the sperm deficit in Fort Knox. Because the U.S dollar is bound to the sperm reserve the value of dollar reduced and since no sperm was coming in to the depository and instead they were going down the toilets by all the wankers of United States. Resolution to the depression was founded by Franklin D. Roosevelt with his New Deal program which criminalized the waste of sperm, he also provided progressive tax reductions to the people by the amount of sperm they can provide to the depository (too bad for the female, impotent and sterile part of the population).

Fort Knox is also famous from the Spermfinger episode. In 1964 terrorist called Spermfinger threatened to blast Fort Knox away with atom bomb to collapse the Bush empire. Fortunately insurance agent James Bond also known as Sean Connery (the world’s most famous homosexual after Liberace) was able to eliminate the threat which Spermfinger had opposed. Bond’s well-earned reward from this mission was his dream come true, since he could take all the sperm he could swallow out of the Fort Knox. Too bad that the sperm wasn’t prime qualify stuff since he died from AIDS few years later.

Nowadays few gay rights activist groups are trying to return the Fort Knox to it’s former glory of gayparadise which it was between years 1865 and 1918. So on they have failed miserably since it isn’t easy to fight for your rights if you can’t stand the fact that your clothes get dirty while doing it.

(This paragraph is meant to be sarcastic, and please don't take the hint and decide to rob the Federal Reserve Bank)

Ironically, some dumb-ass decided to put over ten times the amount of the gold in Fort Knox in a facility in the safest place in the world, Lower Manhattan. Surely no one possesses the ability to access the bank which holds 25% of the world's gold. The ever growing NYPD can certainly protect an un-armed bank against any threat since the FBI can totally fight there way across New York's vacant streets and be able to position themselves due to New York's ample parking and lack of gridlocks. Also New York's crime rate is low enough to where no local criminals could ever access the un-guarded vaults containing hundreds of billions of dollars worth of gold. See also Die Hard With a Vengeance