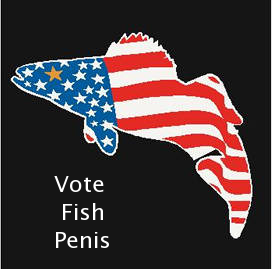 An original campaign poster from Reagan's 1980 bid for the White House.

"Vote Fish Penis" - Often touted as the most popular of all campaign slogans, and at the very least, the most memorable. The slogan - first used in Ronald Reagan's 1980 bid for the White House - not only let the politician connect with the everyday United States citizen, but also helped bring the country together once again. Thanks to the slogan, the once great, once terrible, once great again, but now dead Ronald Reagan took office in January of 1981.

Although Reagan's presidency marked many firsts for the country, most of these were over-shadowed by the now infamous "Vote Fish Penis." The phenomenon itself was hard to explain, but no one could deny the strange urge they felt after hearing, seeing, or sometimes just smelling the words. After discovering the effect that the seemingly random group of words had on voters, the Republican party acted quickly to harness their power.

With nearly 19 months left before the elections were to be held, the slogan was already becoming a household name. Once again taking into consideration the great power of the words, the GOP decided to choose their presidential candidate using the highly controversial eenie meenie minie mo method. Shortly after Reagan took office, he announced that the slogan would be retired. However, not even this intolerable act of cruelty could squelch the fire burning beneath "Vote Fish Penis."

The Man Behind the Legend

While many claim that the words were never discovered and had been here all along, even more give the credit to Reagan for being the first to use them. However, both presumptions are idiotic and ill-informed. In fact, the phrase was first used in 1978 by "comedian" Bob Hope to describe the shape of Jay Leno's head. Although Hope's original words were "Very Fish Penis," it was discovered that by changing the first word to "vote", voters would be more likely to associate it with voting.

About a month later, it was reported on CNN that an apparent escaped mental patient had held up a New York City court house, demanding that he be allowed to vote Republican as soon as possible. When Republican officials heard this, they hastily arranged a meeting with the man to discover his motives. The man explained that he had heard the phrase uttered by Hope in a TV interview, and was suddenly overcome by the need to vote conservatively. As the officials listened to the man, they too experienced the strange feelings.

Even before the interview was finished, there were dozens, possibly hundreds of linguistic experts hard at work studying the strange effects the words had.

The Science of "Vote Fish Penis" 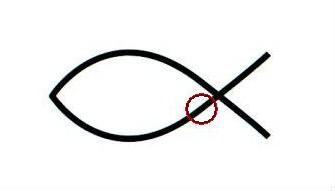 Approximate location of a fish penis, although one cannot be completely certain.

Although experts cannot come up with a definitive reason to why the phrase makes people act the way they do, there are several leading theories.

Pretty much all of the parties involved in the ongoing scientific debate admit that it is unlikely there will ever be a theory accepted throughout the world. Even so, most pledge to keep on preaching their ways for as long as anyone will listen, which isn't much longer anyway.

The "Vote Fish Penis" buttons looked nothing like this, not even remotely close...

As soon as the GOP realized the inherent power hidden inside the words, they got right to work on promoting their new campaign slogan. Not only was the slogan put on the usual T-shirts, Baseball caps, buttons, and women's breasts, but it was also printed onto nearly everything you could imagine.

One popular political commentator went as far as to say, "It's like I'm swimming in a sea of Fish Penises." Actually, there was some truth to his simile... In the summer of 1980 a Kansas City pool held a fund-raising event which they named they aptly named "The Fish Penis Fund-raiser." For every $500 they raised, one of several local politicians would dive into the pool and grab a fish by the abdomen. Not only was this fun for those watching, but it was freaking gold for the tabloids, too. As you may have imagined, this was only one of several major fund-raisers with the "Fish Penis" theme.

As the election drew nearer, a small Washington D.C. restaurant specializing in sushi made a special announcement. For every 10 ten authentic fish penises eaten at the restaurant, they would donate $20 to the Republican Presidential Campaign Fund. Unfortunately, there was only a total of 42 fish penises eaten, and the restaurant was later shut down for apparent food poisoning.

As the "Vote Fish Penis" movement was becoming more and more popular, many Democrats feared for the worst. They knew that if they were going to do something, they had to do something drastic. So, in April of 1980 the Democratic party, along with incumbent president Jimmy Carter, launched the "Bald Men Wearing Pantyhose" campaign. The goal was to energize voters in the same way that the GOP had done with its campaign.

Unfortunately, the "Bald Men Wearing Pantyhose" slogan turned most people off. And when they started releasing pictures to go along with the new slogan, the FCC had to be called in to stop it from going any further. While this was a disappointment for those who had long been fascinated about bald men in pantyhose, most voters were relieved.

Having tried nearly everything else, the Democrats decided that the only hope they had was to remove the "Vote Fish Penis" campaign entirely. So, that summer, over 50,000 liberal voting citizens (which was about all that were left by then) marched to the doors of the Supreme Court. They brought with them the idea that "Vote Fish Penis" was cheating, due to the natural instinct one had after coming in contact with the words.

Once again, the Democrats were crushed when the judges stated that they were rather unsympathetic due to the recent "Bald Men Wearing Pantyhose" campaign, and advised the remaining Democrats to "just give in already."

As mentioned earlier, "Vote Fish Penis" was officially retired in early 1981, but that hasn't crushed its amazing legacy. Nor has it really done much of anything, considering you can't really retire a string of words... The slogan is still used today, but only when conservatives are in dire need of a win. And merchandise from the original campaign is making lots of money on the web.

As for the Democrats, well, they've recently discovered that when "Vote Fish Penis" is uttered three times backward a cat may be impregnated for no apparent reason. Besides that, they haven't got much hope, although the vintage "Bald Men Wearing Pantyhose" campaign merchandise is now sold to collectors for seven times the Republicans' memorabilia's current price.

So, in conclusion, when you're at home watching CSPAN, and you think to yourself "Wow, there's a lot of Republicans there... how'd that happen?" Remember "Vote Fish Penis" and then say, "Oh yeah.. that."