For those without comedic tastes, the so-called experts at Wikipedia have an article about GOP.

A Typical Republican in the middle of lunch 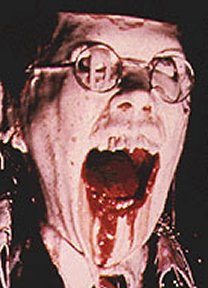 Global Warming - GOP Style
“You are a communist!”

The actual birthplace of the GOP is still questionable. The party claims it originated in Ripon, WI, but recently the German Government has released documents revealing shocking facts. The documents suggest that the last remnants of theNazi Party fled to America, to set up a "Republican Party" or "Grand Old Party". "This was our master plan", said Adolf Hitler on the subject, "we knew we may not make it, so Ripon would be like my Munich." How the Nazis got here, we know not. They may have run across the unguarded (at the time) Mexican border, or they could have dug a tunnel from China. Once the party was "born" it spread like the mexicans through our once free country. Like Macarthur's Island Hopping Campaign, the GOP plans to do the same if expelled from America. Bush has already planned his "republicanpalooza" across the globe. The GOP will eventually return to Germany when the Germans forget that they can't win any World Wars.

Shortly after the 1855 scandal in which Republican Party Chairman Snidely Whiplash masturbated the Party Mascot in the middle of the White House lawn (like most Republicans, he really had a thing for elephant cock), the Party knew they needed a little public relations pick-me-up and nothing washes away the sight of a well-tailored man jerking off a pachyderm than an acronym.

So the Republican soldiers, commonly referred to as the SS, laced up their jackboots and goose-stepped it into the streets to round up anyone they believed could help them create this glorious acronym - mainly, those with improper melanin amounts, lesbians and people with French-sounding surnames. These people were then thrown into special "creative camps" where they could work on this task without any distractions or basic human rights.

They were never heard from again. But thankfully, the Republicans got their beloved acronym...GOP.

George W. Bush....half man, half god. It should be known that there are plans to begin construction on Mt. Rushmore, where G-Dubs looks to become the fifth president to get his mug engraved.

The Various Meanings of GOP[edit]