“"This political stuff is hogwash. As long as you get some, who cares?"”

This translation of the Bible was written by God, the real One, not that one who sits in the street screaming at passersby about the aliens who stole his underwear. It takes into account the greatest findings from such reputable liberal scholars as Michael Jackson, Charles Manson, Joe Mama, and Eminem. It speaks to our generation in a manner which no other translation can, because it has full color centrefold pull-outs. It is also known as the Doomsday Book. 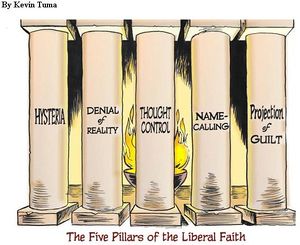 The five pillars of liberal faith.

I. "I am the Lord thy God; thou shalt not have other snack foods before me, unless they come from an all night liquor store."

II. "Thou shalt not tell lame 'yo mama' jokes to your mother."

IV. "Honour thy father and thy mother, except on Livejournal."

VI. "Thou shalt not commit adultery, except if you are elected into office or nobody else is watching. If nobody else knows about it, it didn't happen. If someone accuses you of adultery argue with them over what the meaning of 'sexual relations', 'is', and what other words really mean."

VII. "Thou shalt not steal televisions, except if you are a Negro and a natural disaster happens, then everyone for themselves."

VIII. "Thou shalt not bare thine ass unless it is amusing and in public."

X. "Thou shalt not covet thy neighbor's mmooose.ee"

10. Questioning the fact that there are 14 "Seven Deadly Sins"

11. Not committing adultery when holding public office. (This Eleventh sin was created in opposition to the Conservative Bible's Eleventh Sin of "Not dealing heroin and small arms to South American resistance groups and Iran" Or the twelfth conservative sin of "Not giving $3,000,000,000 of American taxpayers money as well as CIA training, small arms, rocket launchers, tanks and satellite images of Soviet troop movements to “freedom fighters” such as Osama Bin Laden in Afghanistan")

13. Not sacrificing your young to God.

God wrote the Bible whilst learning computer networking in college.

Liberals generally have no Biblical Philosophy because they aren't brainwashed swine like Atheists who foolishing believe in Athe by denying she exists. Instead they are ignorant cockroaches that follow anarchy, except they hold others to rules but not themselves. In fact, Liberal Biblical Philosophies if any exist, are to be applied to non-Liberals but not Liberals. Which means Liberals can do whatever the hell they want, but hold non-Liberals accountable for their actions and behaviors.

The unwritten Liberal Bibilcal Philosophy that Liberals generally do not follow (at least they claim not to follow anyway) are as follows: 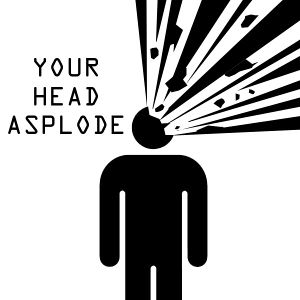 Like this picture, Liberals' heads may asplode if their holy book is found to be actually written by Ann Coulter

God wrote the Bible whilest learning computer networking in college. The actual philosophy of the Holy Bible: Liberal Edition is therefore up for debates. One group of Liberal Christians say that there is no Liberal Bible philosophy, while the other group made up their own Liberal Bible Philosophy, yet like Atheists these Liberal Christians are brainwashed swine who believe in God by telling the world that he does not exist. This section of the article has been rewritten a dozen times and blanked at least twice as much as a result of these two waring factions of Liberal Christians. Yet it has produced a series of books being made into a movie called "The Golden Compass" in which Liberal Atheists prove that God does not exist, by first acknowledging that God exists and deserves to be killed (because Santa Claus didn't give Lyra a pony for Christmas, and the little girl raises an army to fight God by making a dimensional portal into the afterlife, just because she was on Santa's naughty list that year for throwing temper tantrums at her parents when they told her to go to sleep at 9pm and she wanted to stay up until 3am to watch watershed/porno shows on Cable TV instead. Then she travels north to look for Santa Claus, but finds polar bears in armor instead, who used to work for Coca-Cola, and drinking all of that soda made them mean and mad at God. Then other people called Gyptians join her, along with Demons from Satan himself who also does not exist, to go to a city fortress that does not exist and open up a dimensional portal to the afterlife which does not exist. To kill God, ignoring the fact that God/Jesus died over 2000 years ago and came back from the dead anyway.) Liberal Christians, then agree with the Liberal Atheists and support Hollywood to make the movie based on the books. It sure ticks off those Fundies and Conservatives, though.

In Genesis, Athe creates Adam and Eve and others from Evolution, and uses Abiogenesis to create life from inorganic matter using random chance. This is how the first man and woman evolved. It was an Unintelligent Design by Athe, and not some sort of Intelligent Design. In fact, Genesis 11:30 states "Intelligent Design isn't real, you are all morons for believing this lie!" and that Liberals should go out and get Evolution promoted in schools as the truth, especially in the Kansas state in the United States.

Also Genesis 12:36 states "It was Adam and Eve, but it also could be Adam and Steve or Anna and Eve, marriage is between two consenting adults, including same sex marriages, anyone who believes otherwise is a homophobe." Which seems to be the original of the Liberal view on Gay marriage and Homosexuals. 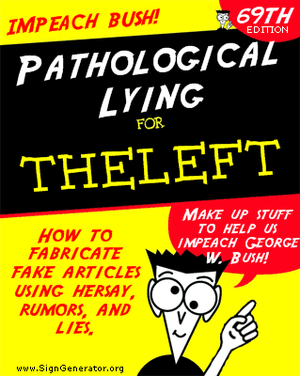 Read this book to learn how to be a liberal and serve God.

Recent changes were made to the book, to make it easier on the eyes and easier to understand. The average modern Liberal has the IQ of Potato Salad, so the whole book had to be rewritten into a more modern, simpler, and revised format. It sums everything up to under 100 pages, and most of them are pictures. It includes hints and tips as well as examples. It helps to explain how to be a modern liberal, and how to take advantage of technology and the media. It outlines the marketing plan that librals need to follow when communicating with the unwashed masses of the public. It guides liberals in their quest for power, by learning how to grab attention by any means possible. It has forwards by Cindy Sheehan, Michael Moore, John Kerry, Al Gore, and many other famous liberals. It is written to help you, and others, learn to get in touch with their liberalism in a more modern format.

Use it against those heathens, and infidels out there who speak out against our holy book and way of life. Learn to unleash that liberal power that is inside of you, and shine your light into the world to expose the darkness. After all, it is only our opinions and views that matter, as we are the chosen people of the planet and we deserve to be in power. This new modern version of the book also comes in audio tapes and CDs, for those of us who cannot read. It has been a favorite of many prisons and hotels, replacing the Gideon's Bible and other books in the best seller list. Read it every day and learn the truth, preach and convert others over to our side. Live up to your potential by reading this book.