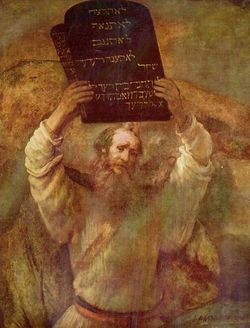 The Book of Revelations was a last-ditch effort by the writers of the New Testament to improve the quality of God against the old-school "so lame" tenets of Jehovah.

The effort to revive the declining series of New Testment episodes is seen as the rare revival of a TV series during its late run. While some critics consider the Book of Revelations to be a "jump the shark" moment for the Bible, the public reception of the Book has largely been positive.

The New Testament was started as a spin-off of the Old Testament, itself a renamed, rebranded and relaunched version of the earlier Torah, with more sex, violence and inside jokes.

The story focuses largely on one character, Jesus Christ and his quest to save humanity from the ineptitude of his father, God, a holdover character from the Old Testament.

It is set after the Old Testament ends. In the New Testament, Judea is overrun by the evil, foreign invader Romans, who wear silly hats and hurt people for pleasure. Once again the Jews are challenged to a game of "My God is Better Than Your God, and I Can Prove It". Only, this time, the Jews' God is forced into hand-to-hand combat with Jupiter who eventually defeats the Jewish God.

The writers of the New Testament tried to reposition the show in new ground for the Bible series. The Old Testament was built largely around a handful of strong central character engaged in repetetive acts of violence, revenge and bloodlust. From killing the Egyptians to killing the Caananites, the Old Testament was a balls-to-the-wall, thrill-a-minute rush in the traition of Knight Rider or Magnum P.I.

The New Testament was slower paced, more thoughtful and actually often renounced the violence fans had come to love from the Old Testament. Consequently, the New Testament turned into a ratings disaster for it original parent, Fox News. Fox cancelled the New Testament and began offering the rights to other companies. ABC picked the show-up for a 13-episode schedule as a winter mid-season replacement following the dreadful failure of its Vedas remake.

Calling it a depressing failure "full of forgiveness-driven bullshit", ABC threatened the writers of the Bible's New Testament with cancellation.

ABC gave the writers the chance to retool the show, which they did.

The writers of the New Testament took a bold step, and decided to write out their main character, Jesus, at the end of season three. The writers decided that Jesus would be captured by his archenemies, the Romans and executed.

The two-hour season three finale marked a stark departure from other New Testament episodes. Jesus suffers through almost the entire two hours under bloody, fetish torture at the hands of the Romans. At last the Romans challenge the Jews to another game of My God is Better Than Your God, and I Can Prove It. The Jewish God forfeits, and Jesus dies.

After much fan outcry, the writers briefly revive the Jesus character at the beginning of season four. However, Jesus leaves quickly and does not return.

With the end of the Jesus storyline, the writers took the bold step of changing the story into a multi-faceted, dazzling bloodfest marked by numerous characters who appear briefly to advance the plot and then do not return.

Satan, a character largely marginalized as a foil for advancing the Jesus story in seasons one and two, is brought back in full force. Satan is joined by his own sidekick, the Antichrist. Satan and the Antichrist set out to wreck all of creation and finally win the giant bet with God over whether dropping Mentos into Diet Coke will produce an apocalypse.

Virtually every episode of season four was marketed as "The Book of Revelations", meant to tie together the loose plots and characters. Every episode was notably bloody, violent and fast-paced.

Audiences reacted with glee. Ratings for the New Testament went through the roof, as week after week new characters were introduced and slaughtered with abandon. The Four Horsemen of the Apocalypse is generally considered the definitive episode from season four.

The writers shocked audiences with their season finale. The season finale would also be the series finale. The storyline stretched across five episode broadcast during the spring of 2003. The finale episode culminated in the suddent return of Jesus.

Many of the writers had wanted to revive the Jesus character one more time. ABC agreed, as long as Jesus would be restyled to fit the new badass, ultraviolent New Testament.

Jesus returned, all punked out, redrawn by animator Seth McFarlane, best known for reivivng the Spiderman comics and creating Spawn. Jesus proceeds to destroy swaths of enemies, and even many of his own true believer followers. With impunity he crushes Satan, smacks down those who would betray God, reunites God with humanity and saves the world.

The violence of the Book of Revelations is often criticized for teaching children that forgiveness and sharing are marginal next to bloody wars.

The series ending is often criticized as testing the audience's willingness to suspend disbelief. Many critics say that the New Testament went from being a sober, character-driven drama to a violent soap opera for men.

Universal HD recently announced plans to air a remastered version of The Book of Revelations in full high-definition starting November 3.