From Uncyclopedia, the content-free encyclopedia
Jump to navigation Jump to search
We're Looking For A Few Good Men Neo-Nazi Emos Into Cutting

The Satanic Bible... I Love Satan!
“Why does God get all the good people, and I get all the retards???.”

As this would directly describe Republican practices, Satan was forced to disguise the inherent message by making it biblical and mythological. Satan looked far and wide and found the wisest person he could to write the Satanic Bible. But when he said no, he got some high school drop out named Anton LaVey instead.

Later on, LaVey noticed some smarter Christians (yes, they are rare, but do exist) made a connection between Satanism and Satan. To cover up the whole plot, he made all his fellow Satanic buddies swear they’d proclaim to the outer world that Satanism and Satan had nothing to do with each other.

Contents of the Satanic Bible[edit] 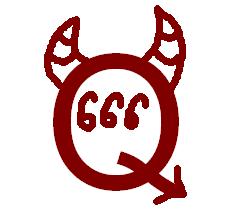 The Satanic Bible consists of the following parts:

In these pages the mind is made numb with sappy love stories from teen magazines. This part contains subliminal messages such as:

Afterwards there is an autobiographic story by Satan, which was later replaced by an autobiography by the even more arrogant LaVey. LaVey left out the cool stuff about how he smacked around his wife and kids, pimped out followers, knocked up his daughter Zeena when she was 14, and stuff like that and made up stuff about being a lion tamer instead.

(Fire) The Book of Satan[edit]

Ripped off from other books, it tries to sound all mystical and spooky. Read the liner notes of an old a KISS album, and it's about the same thing.

(Air) The Book of Lucifer[edit]

This book reminds Satanists that they need air to breathe, and to take a break from huffing glue.

(Earth) The Book of Belial[edit]

This is about the goddess of Wicca [which is really the same thing as Satanism, just admit it!}, or the Earth. Yes, it's about worshiping dirt! DIRT I TELLS YA!

(Water) The Book of Leviathan[edit]

This book reminds Satanists to drink a glass of water once in a while, instead of always chugging down Bacardi 181.

Doesn't really call anything, but sure sounds kewl when you read it and you been cutting yourself to Marylin Manson's "The Beautiful People" or Ozzie. Like awsome, dude!

When LaVey unleashed the vile Bible upon civilization, Conservative nutjobs had to ruin his (and Satan’s) debute. The name “Bible” was said to be copyrighted by Moses just the day before. LaVey fixed this problem by promising the Conservatives to focus his followers’ anarchistic lifestyle upon the Democrats

Satan decided to make a book about equal rights for women. The manuscript for that book never made it to the publisher, because LaVey was a mysoginistic wife beating pimp who even fucked his own daughter and he was like "A book about bitchez? WTF?". LaVey threw away the manuscript and told Satan he couldn't find it because he "lost it", and Satan was like "Yeah, whatever". So he wrote "The Satanic Witch" instead. The book basically tells women to go around stinky and show their naughty bits, but satanic chicks are stinky whores to begin with, so there wasn't a real need for it.

After writing loads of unrelated nonsense and watching Dr. Phil, he decided to get some help. He made his Secretary of Human Punishment write the final version, after which it was sent to the editor, Anton "Smack Dat Ho" LaVey.