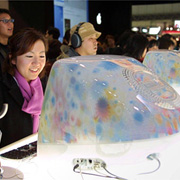 It is a simply but true fact: Macintosh is Satan. Indeed, Bible college professors unanimously agree that nonconformism is just another word for satanism. So is it really such a surprise that the Unholy One is using Macintosh to carry out his nefarious will? To anybody who has received the Good News, this is no suprise at all.

Macintosh: A Trojan Horse for Darwinism[edit]

The operating system that underlies and hides within the newest version of the Macintosh (MacOS X) is called... Darwin! That's right, new Macs are based on Darwinism! While Apply wisely refrains from advertising this fact to consumers, this reality is well known among the computer elite, who are mostly Atheists and Pagans. Furthermore, the Darwin OS is released under an "Open Source" license, which is just another name for Communism. Apple may try to hide all of this under a facade of shiny, "lickable" buttons, but the truth is obvious to those who believe: Apple Computers promote Godless Darwinism and Communism.

History of the Unholy Alliance[edit]

But is this really such a shock? Lets look for a moment at Apple Computers. Founded by long haired hippies, Apple Computers has consistently supported 60's counter-cultural "values", such as building things in your garage with only junk for parts. But there are even darker undertones to this company than most are aware of. Consider the name of the company and its logo: an apple with a bite taken out of it. This is clearly a reference to the Fall, when Adam and Eve were tempted with an apple by the serpent. Now, instead of Satan himself, it Apple Computers who offers us temptation, thereby aligning itself with the forces of darkness. The first Apple I was originally $666 - clear proof that the company hates Jews and God.

Apple Computers started out as a corporation, but that was just a facade. The company is well known for its cult-like following. It is not a stretch to label the company an actual cult. Consider co-founder and leader Steve Jobs' constant exhortation through advertising (i.e. mind control) that its followers should "think different". True believes must ask themselves: "think different than whom or what?" The disturbing answer is that Steve Jobs and his minions at Apple Computers want us to think differently than the Lord Jesus Christ, to reject all the values that Christians are taught and to heed not the message of the Lord!

Given the now obvious anti-Christian and cultish nature of Apple Computers and its leader, Steve Jobs, is it any wonder that they have decided to base their newest operating system on Darwinism? This just reaffirms the position that Darwinism is an inherently anti-Christian philosophy spread through propaganda and subliminal trickery; Darwinism is not based on science, as its brainwashed followers would have Christians believe.

A Satanic, unevolvable chimera compels you to submit to Darwinism!

Since the original writing of this article, the author has learned that the Darwin OS mentioned above now has a cartoon mascot (no doubt to influence children) named Hexley (pictured at left) -- a platypus dressed as a devil who performs occult magic, i.e. hexes. It would almost seem the Apple is flaunting its ties the forces of darkness.

Here Dawkins shows us how to turn a cross into a swastika using Evolutionism.

While no true Christian would ever have believed that the Apple connection here was mere coincidence, Christiantologists have investigated the issue (luckily, the Fellowship Baptist Church has an extensive research library that also includes a representative collection of anti-Christian hate literature which is used for just this sort of investigation) and were shocked at what was found.

In the 1996 edition of his book, Dawkins includes two appendices detailing his little program. The first (included in the original 1986 edition) is entitled "Blind Watchmaker: An Application for the Apple Macintosh Computer". The first illustration on the same page as the title shows a Mac window (similar to the Explorer windows seen in Microsoft's OS) and the rest of the appendix includes many screen shots from a Mac, a number of them even featuring the bitten apple logo.

It gets even more perverse in the second appendix (added material from 1991) entitled "Computer Programs and the Evolution of Evolvability". Here he shows how he "evolved" the "inspired artifact with which all this work was done"... the word "Macintosh"!

At the end of the appendix he even encourages the reader to switch from IBM compatible computers to Macintoshes, saying that "you can exult in something of the feeling of liberation that may have attended evolution's great watershed events." What a ringing endorsement for Apple computers that is!

As can be seen, the problem is much worse than true Christians had originally thought, as Apple Computers has been aiding and abetting ardent Evolutionists like Dawkins since at least the mid 1980s.