Kim Jong-un about to find out what this particular red button attached to a nuke control device will do. The possibilities are endless.

The Red Button is a colloquialist term used for mystical red-colored contraptions found in electric control devices and Mario Lopez's nipples. Alternatively known as the doomsday device, or the power key by some smart-asses, it is a tool of overwhelming force and dominance, having played a major role in most global disasters and mass murders in history.

A red button's function varies case-by-case, but generally its purpose is to either turn on or turn off various subjects - either literally or figuratively, depending on the operator's knowledge on double entendres. Occasionally a red button is capable of performing both of the tasks, thus forming an endless source of renewable energy through perpetual keystrokes of the button and hypothetically ending world hunger if said technology was utilized outside the production of weapons. Determining the function of a specific red button is only possible through first-hand experimentation, which often leads to unexpected results and more than likely will turn on every other device but the desired one.

The technology behind most modern digital devices was obtained from extraterrestrial lifeforms sometime during the Egyptian Industrial Revolution in 2000-2500 BC. This was kept as a well-guarded secret from the common people for centuries, as the Egyptian elites didn't believe the rest of the world would be prepared nor intelligent enough for the advanced alien technology. But as time passed, the unquenchable thirst for money and the need to spoil the environment for no reason grew, so it was decided that some of the technology would be presented for the rest of the world to purchase and consume. The problem was, however, that the average person could not understand the fairly complex alien devices and their inner workings, which is why an additional multi-purpose tool would have to be included into the devices to simplify their usage. 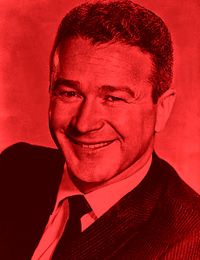 The original Red Buttons approves of this article for some unfathomable reason.

The developers came up with the red buttons; large push-buttons designed to visibly stand out from whatever it's attached to in order to lure in unsuspecting people - similar to how some carnivorous plants operate. No longer would people have to go through the painstakingly long process of reading device manuals; now all they needed was to push the big shiny red object and stuff would happen. And so has stuff happened ever since, without anyone ever having to question the exact process of the how stuff happens, or the weird alien-like symbols that retailers sometimes forget to erase from device packages.

Despite the simplicity, some device operators may still occasionally run into different malfunctions, such as the aforementioned stuff just refusing to happen even after repeated attempts of pressing the red button. This is obviously because some aliens occasionally hijack electronic signals from Earth for their own devious plans, and not because of faulty devices or even technologically illiterate boomers failing to follow simple instructions. For example, a malfunctioning remote controller for a television set would mean that the infrared rays of the remote control at hand have just been randomly redirected towards a nuclear plant in some parallel universe for the amusement of some rival civilization. While this causes great harm and exertion to the operators, they simply have no other choice but to purchase a new remote controller in the face of this unfortunate event, although, alternatively, they move their fat ass up the couch and turn the television set on manually if they still remember how. Half the time the process of pressing a red button is a risky game of whether or not something works, which is why the process has become a highly popular form of gambling, comparable to Russian roulette.

Red buttons are chameleon-like in their adaptability to various cultures. They are available in devices found from all the biggest retailers, but can also be found in Istanbul, South America, Prussia, South Korea, Australia, Monaco, Jamaica, Ireland, New Jersey, Mexico, Idaho, Spain, Taco Bell and other such smaller developing countries. Although the red button may take many shapes and forms, the general idea behind its design and functionality are virtually the same, but with some exceptions. Soviet countries, for example, color their red buttons with shades of blue in order to make the distinction between communist symbols and the red buttons clearer.

For those without comedic tastes, the so-called experts at Wikipedia have an article about Red Button (digital television).

While animals don't generally come with pre-installed red buttons, some external do-it-yourself red buttons are available for the sometimes-necessary process of shutting off pets and other wily creatures that no-longer serve any purpose being powered on. Items needed for this include a red laser pointer - in order to form red circular shapes; some sort of push-button or trigger - to replicate the motion of pushing something; and finally a sub-machine gun or other weapon with sizeable magazines - because, let's face it, your aim is pretty terrible and you will need that extra ammunition. The downside to this method is that no one has yet discovered a way to turn the animals back on once the turning off has been applied, which is why this version of the red button is also known as a kill-switch.