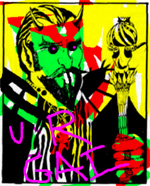 Photo of Asmodeus from "A Kind of Hushpuppy In My Blowhole", the last Carpenters Album he would produce.

Asmodeus or Asmodai (born June 14, 1968), Palm Springs, CA. is an Arch-Duke of hell, songwriter for the Easy Listening combo The Carpenters, film producer, talent scout, cookie baker, fencing instructor, yoga teacher, car salesman and CEO of the Crisco Corporation. With band members Karen and David Carpenter, Asmodeus brought the sweet sounds of maturity and wisdom to post-hippie culture as the uncredited author behind the hits "Close To You Mother", "We've Only Just Begun To Fuck With Vietnam", "Rainy Days and Jelly", and "All I Want To Do Is Hepatitis B". The last song was never recorded. Asmodeus has been listed on the list of "Greatest Sweaty Cornholers" from 2000 until 2006 when he was replaced with your mother.

While he is best known for his role in countless adolescent devil-worshiping rituals and his appearance in The Monster Manual, he has been instrumental, apart from his behind-the-scenes music career, in several key events in the world. He is renowned for practically inventing the twenty-hour porn-epic and has been crafting his masterpiece, currently titled "Charleton Heston: Three Fingers and A Fist", due at the 2012 Cannes Film Festival.

(NOT to be confused with Asmodeus Mozart, but near there...) Asmodeus was born David "Dave" Archibald Beaver to Mortimer and Clandice Beaver on June 14, 1968. As a young child it was obvious that Asmodeus was destined for great ranking in the depths of hell as the young Beaver seemed perpetually in a daze, not to mention his glowing eyes and horns growing out of his head. At the age of 10 he killed his mother and ate his father and by the age of 15 held the record in long-distance rape at 455 rapes committed in 25 minutes over a distance of thirty-three and one half kilometers.

The Young Asmodeus: The Cookie Days and Joseph Stalin[edit] 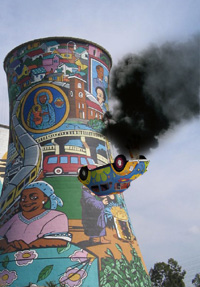 Larry, the Soul-Bong. Note the use of hippie Volkswagen as a bowl.

As a young man, Asmodeus was known more for his prowess in the kitchen than his lordship over evil. In 1988 he invented the peanut butter cookie using only spit, babies and an incantation borrowed from his high school chum, Behemoth Tutankamun. The recipe was so successful that if it had not been for Asmodeus' legacy of tripped-out freaky evil shit, he would have certainly been known as one of the most prolific peanut butter baby cookie bakers of our or any time. In 1989 Asmodeus left his hometown of Fork Kentuckistan to pursue the ancient art of Yoga Instruction. While he experienced a small degree of financial success, he was forced into the realization that Yoga was not the way of life for him by Joseph Stalin whose insistence on burly calisthenics as opposed to "faggy yoga shit" mesmerized the young man with his hairy back and buttocks. Disenchanted with Yoga, Asmodeus ate a handful of blotter acid and took a three-month respite in St. Petersburg Florida, hunting for lost babies and mint ice-cream in hopes of reclaiming his cookie days. He was followed by Stalin who insisted he join Satan and himself in a misogynistic road-trip to the Black Forest of Germany. Asmodeus agreed only to be left on the side of a highway in Spain naked and suffering from "the worst bad trip any prince of hell could hope for".

It was also during this period that Asmodeus invented Dungeons and Dragons while trying to huff flying squirrels. While it is still in dispute whether Asmodeus really invented Dungeons and Dragons, namely by Gary Gygax and the United Association of Mind Flayers, Mother, Mother (UAMFMM), few can dispute him placing himself at the top of the lawful-evil hierarchy of demon princes immediately below the lawful neutral prince of evil, Exxon and Shell Oil. "I was reeeaaaly fucked up then" Asmodeus writes in his autobiography.

"I mean, flying squirrels? What the hell was I thinking? All that stupid Dungeons and Dragons crap started getting me really paranoid. I had at least thirty-thousand prepubescent boys trying to sell their souls to me every day! I stopped buying them after about 200,000. I mean how many souls of socially inept borderline-homosexual children does one prince of darkness really need, anyway? I even started smoking them in Larry, our giant soul-bong we kept in the living-room. Shit. I'll never do that again. I started feeling really weird. Let me just say, I did things I'd NEVER do, NEVER. And that's coming from a prince of darkness! 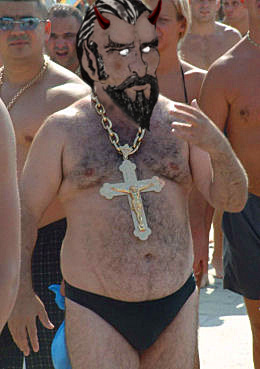 In 1998 Asmodeus began working on his seminal work, a thirty-hour epic high-budget film based on the fantasy work of J.R.R. Tolkein. The film with the working title "Gay Wizard: Do Hobbits Dream of Elf-Taint?" began production in February of 1999. Filmed off the coast of Cleveland, Ohio, several difficulties arose when the plot was lost, the film crew was relocated to Brazil and the working title was changed to "Don Quixote Is A Homo". Asmodeus began to lose control over his film crew, mostly comprised of washed-up porn stars and Portuguese mental patients. Regardless of the hardship, filming continued with only three more plot shifts, two more title changes and a major decision from the film's new investor, CrisCo- the vegetable lubricant corporation founded in 1815 by Sir Walter Meeps in Uruguay, to overdub the entire film with a slowed-down version of Charlton Heston's reading of The Bible. Angry as hell, Asmodeus ate half of the film crew, fired his investor and moved production of the film to The Middle East.

The Middle Eastern years were fraught with difficulties from language barriers, fashion problems and especially that it was nearly impossible for Asmodeus to locate willing prepubescent boy-souls to feed what had in truth, become an insatiable habit that kept him burning the candle at both ends for weeks and weeks. It wasn't until he was found laying on a beach next to the river Styx by Satan and Stalin that Asmodeus was able to be nursed back to any resemblance of his former glory.

He remains a committed misanthrope and enemy of unicorns of which he dismembers and murders a minimum of five per day. He is a staunch supporter of the Anti-Kitten Huffing Movement and a devoted heterosexual.