The FBI does not believe this article exists, if you want to stay alive please click here.

For those without comedic tastes, the so-called experts at Wikipedia have an article about Bob Geldof. 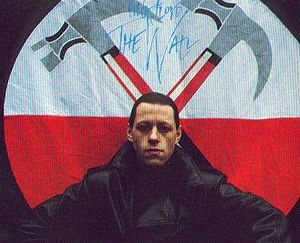 Geldof enjoyed his time being the leader of fake Nazis.

“Their music is too contrived, and so is the cheque I got from them for having my Nazi ass star in The Wall”

“I enjoy the sensation.”

~ Geldof on pissing himself

Bob Geldof (Vienna, 1932 - Lost-Somewhere-In-England-Crazy-City-Of-Drugs-Groupies-And-Violence-Upon-Tyne, 1980), 196th and last (known to history) son of Adolf Hitler, was a well renowned Nazi during the Hippies Epoch along with Arnold Schwarzenegger. He died at the age of 48 of an ecstasy overdose. His relatives claimed that the overdose occurred as a product of his self-reflection upon what he did in his miserable life (shot Jews, killed his mother, ditched his wife, etc.). Although there are rumors, especially at the Lie Factory, about Geldolf playing a role in a certain movie "The Ceiling" written by Dink Droyd, this information has never been confirmed. Geldof is most famous for his brainchild Band AIDs, where he personally went through all boysband members and gave 'em a right good bumming - especially those in Duran Duran. The DVD of Band AIDs won Best DVD at the Shockwaves NME awards in 2006, narrowly beating "Big Natural Tits 10" - which marked a resurgence in the "Big Natural Tits" series (of course never really recapturing the glory days of "Big Natural Tits 1" and "Big Natural Tits 2"), for the accolade.

As a kid, Geldolf was always very imaginative and creative, drawing stuff on walls with a black marker at the Hitler house. Although his father wanted him to become a Nazi (or a gay, but that was the second option), Geldolf dreamed of performing musical acts on scene using a guitar to play electric broomstick. At the age of 7, he attended Third Reich Elementary, in Munich, where he was taught to shoot Jewish kids, ride German bikes and kick Russian asses. This school later on played a very important role in his life, especially as the main theme for his song "Another Fuhrer in The Luftwaffe". The war started the same year, so the Hitler family moved to Berlin, Poland, where his father has gone maverick and initiated plans to take over the world, along with his German friends Pinker und die Braintz. Geldolf promised to never kill anybody, except for those annoying bedbugs and Kenny, what got Adolf angry and he sent his son to a special rehabilitation colony where the boy spent three years of WWII and seventeen years of WWIII. He returned to Berlin in October 1956.

Standing next to his father's grave, Geldolf promised to avenge the Allies (Pakistan-Argentina-Vatican) of his Pride by being a nazi greatest than his dad. Except that, pacifist by nature, Geldolf went a slightly different way than Adolf - he conquered the stage! His plan was to find a travelling circus rock-n-roll band and to join them so that he could earn his trust and respect by a stage musician performance and then, when he's everybody's favorite - propage nazism!

His first attempt was to join the Speedles, a new bhutpop band from Bhutan. He befriended Pawl Mawkkartney, a walrus on speed who ran away from the circus and started his own career. At first, performance was fine, but then, during the recording of their "Shoot and Let Linger" single, led by Geldolf, Pawl and his friends Jorje, Jans and ZergRingo StarrCraft, confessed to the young nazi that he, ahem, sucked in making peaceful and lovely themes for his songs. In joyful agony, Geldolf happily assassinated all of them with an ink pen.

In 1963, Geldolf befriended another talented guitarist, Syd Aeris Tifa Vincent Cloud Barrett (née Saddam Hussein) who had been in prison for five consecutive years for trying to plug his guitar into a public telescope to create the "Overstellar Interdrive", how he used to call it. Both dudes became good friends fast and Barrett, being very talented, suggested that Geldolf changes his name to "Bub Trrigger", which was almost what the nazi did. In fact, he changed his name to "Bob 'Holocaust' Geldof", wherein his real first name lost the "l" letter (he motivated it as not being a loser), probably to show that he isn't from his killer father -olf Hitler family. And Bob... well, Bob is Bob.

Along with Doger Wallters, Gig Skyson, Fletchard Memoright and Havid A Cigmour, Bob and Syd created the Shrink Lloyd band, which was known as The Dreaming Chabdads before 1965. Their first album, called "The Nazi At The Gates of Treblinka", appeared in January 1967 and had been a worldwide success since its release. Bob was so happy of the fame the band were earning that he killed Syd Barrett with a killamathing, who had risen from the dead in July 2006 to avenge the bastard and, finding out that Bob already died, suddenly died again, this time from diabetes.

Everybody who paid a visit to this page must have heard of their bestseller albums such as "The Dark Side of The Achtung", "Wish You Were Jew", "Einmals" and "The Heil" during the 1970's career. Those were the years the band was largely popular, minus Barrett. The best years of the famous band, etc. etc. But something must always go wrong, so did Bob's relationship with drugs. Because of his sad childhood, his miserable life and his impotency, Bob was forced to smoke ecstasy and sniff LSD to render his consciousness so fucking wasted so he could write songs. This is evident by looking at the logic order of the band's album thematics. "The Heil", the last album written, produced and played completely by Bob (the other members had a tea party at the Queen's house (The band, that is, of course! You thought I was talking about that old English bitch that had pissed about everyone already?! Oh, how could you!)). As a result of his efforts, the album, appeared in 1979 was a product of such psychedelic-hallucinogenic-strongshit-badtrip experience, that no one, except Bob himself, could see the real truth under it. Well, the important part is that after releasing the album recording, the band went on touring the World with this material. It is rumored that, during the shows, Bob would put his arms together, crossed, his fists firm on his chest, and scream: "Heil Hitler! Das mein Kampf ist!", then get a machine gun out of nowhere and kill everybody in the audience. It is also unconfirmed.

But what is confirmed is that the shows were more than successful and the public was actually finally obeying him. Bob would pass in the rows and give everyone a mauzer and a swastika. Then, when the people were stoned shit, make them think they are marching hammers and get them out of audience to bring the new Nazi army at his secret location in Bangladesh. Then recruit more and more soldier fans to make his army of unbeatable groupies with cybernetic implants to conquer the World - the one thing that his father has never achieved. An army even stronger than the Third Reich, a Death Army... Anyway, as good always wins, obviously, his plan failed. Maybe because Bob died of an overdose just before he could lead his ranks to victory, or maybe because he didn't pay his stage rentals, too busy making minions, that he was caught by The Police and killed for not complying. I won't tell you because I'm a dick. Go have a cry about it.

After his death, Doger Wallters took all the copyrights for the albums as their own and re-released them, this time full of boring "Veeera, Veera, what has beeeecome of youuuu..." shit. The original version of "The Heil", before it was renamed to "The Wall" by Doger, had only one copy left, which was buried in a Dead Man's Chest somewhere in the Carribeans. Nobody knows for sure (ask him).

Recently however, Geldof's life unfortunately came to an end. During a busking session he got in to a fight over an onion with a fellow nazi tramp and was mauled to death as the tramp owned a doddy shaped rotweiller.