For those without comedic tastes, the so-called experts at Wikipedia have an article about Baphomet. 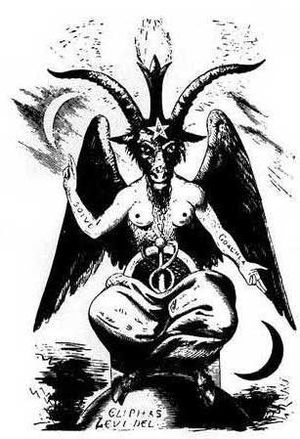 Baphomet, whatever he (or she) may be

Although some contend that Baphomet is a Marvel Comics super-villain, Baphomet is really the demon of parties and partygoers west of the Mississippi. As such, he (or she) is often depicted at parties in Las Vegas, Hollywood, and various family nudist camps in Arizona and New Mexico, and some Oregonians include a statue or a painting honoring him (or her) during their annual festivals of the winter solstice.

Baphomet as a child

Baphomet was fathered by an apostate Roman Catholic clergyman, Alphonse Louis Constant, as a mascot for his annual spring fling, at which nubile women danced naked just because they could. And he is the fruit of a clear example of zoofilia that in this case result in a positive way with a cool demon entity the destroy humanity with laser eyes.

Michael Howard claims that Baphomet is based on a gargoyle on the Commandry of Saint Bris le Vineux, a building owned by the Templars:

The Gargoyle is in the form of a bearded horned figure with pendulous female breasts, wings and cloven feet. It sits in a crossed-legged position which resembles statues of the Celtic stag god, Cernnunnus or the Horned One, found in Gaul (France) before the Roman occupation [1].

Others contend that the demonic figure is a "cross between Porky Pig" and the goat of one's choice and is a cautionary statement to the devotees of bestiality meant to "suggest the consequences of their vice."

Transvestites and transsexuals also appreciate and "enjoy" Baphomet, seeing the figure as "a hermaphroditic expression of perfection which 'marries' male and female, masculine and feminine, in a wonderful prefigurement of the third sex that will replace its imperfect male and female predecessors." In support of their interpretation, transsexuals Lisa Lawrence and Ana Paula Botelho call attention to Baphomet's arms, one of which is feminine, the other of which is masculine, to the figure's feminine bosom and to the phallic caduces it holds in its lap.

Some transsexuals, including Pamela Anderson, Tyra Banks, Ashley Judd, Sarah Michelle Gellar, and Alyson Hannigan, have adopted Baphomet as their "patron demon of transsexuality," and, allegedly, Madonna wants to adopt him as her son, provided that she doesn't have to spend a year in hell before doing so. If Madonna is unable or unwilling to adopt Baphomet, Angelina Jolie says that she will make sure that the demon has a home in which he is able to enjoy the partying lifestyle to which he has become accustomed.

Christians see an expression of evil in the figure's embrace of the inverted pentagram and reject Baphomet as a "worthy or worthwhile symbol," although some Episcopalians consider the demon "cute and cuddly."

Many other accounts of Baphomet's origin and significance are also a matter of record. The Knights Templar claim that they created the idol as a chamber pot for the receipt of their leaders' "holy feces."

Satanists claim Baphomet as their own as well, maintaining that he is a picture of Satan in his original and pristine perfection.

"Baphomet is exciting and sexy," singer Boy George suggests, "because he or she can be and is all things to all people. To me, he's a she who's a he who wants to be a she who would like to be a he. It's so complex and confusing that it's arousing."

Baphomet appears as a character in the Buffy the Shemale Vampire Slayer series [2] and [3].

The figure has become so popular that both Mattel and Hasbro are considering creating a Baphomet action figure for their 2007 toy lines.