The Church of Tyra

From Uncyclopedia, the content-free encyclopedia
(Redirected from Tyra Banks)
Jump to navigation Jump to search

~ Tyra Banks on herself, as quoted from Oprah

“Excuse me bitch? You are not G-d! I am! Don't make me beat you into the wall with my butt!”

~ Oprah on behalf of herself towards Tyra

“What did you call me? As if you were the one to talk, you fatass bitch! Not that there's anything wrong with being fat. You just can't accept my greatness and how I'm so much better than you!”

~ Tyra Banks on how Oprah's a bitch and that she, Tyra, is much better than her

“Better than me? Which one of us gets the higher ratings and can make any book into a hit seller? What now? Now who's better?!”

~ Oprah on how she's better than Tyra

“It's really quite funny because Tyra Banks initials are TB and TB is an infectious disease, much like Tyra Banks”

Tyra Banks, copying Oprah, made her own talk show called The Tyra Banks Show. It all took off from there. It didn't take long for Tyra's show to evolve into expressing a new religion, The Church of Tyra. 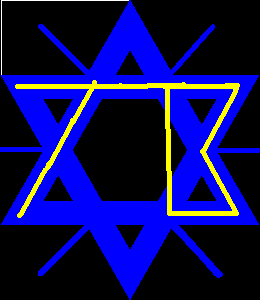 The symbol of The Church of Tyra. Tyra did the same thing to the Star of David that Scientology did to two triangles facing the right. Then she added her initials 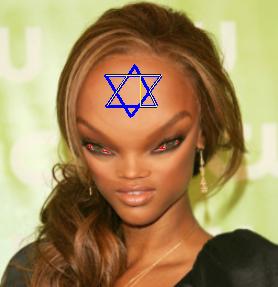 Tyra's hyperdeveloped brain. The redness of her eyes comes from the overuse of "smizing"

Years after Oprah won her war against Catholicism, Tyra realized that Oprah, in fact, wasn't G-d after all. Tyra realized that SHE was G-d. So, she made her own show like Oprah's (knowing that's how to get a religion started) called the Tyra Banks Show. Soon she opened the Church of Tyra (followers of which are called Tyrants). When Oprah found out that again she was copied, Tyra wasn't only smashed by Oprah's but but Oprah also beat her in a wall with her giant boobs without any mercy. But after Tyra came at her with her dragon-like lazer beam, Oprah ran off. Every since, the Church of Tyra has been growing ever stronger.

In the Tyrannikha (the book of the Tyrant rules) it says that any person born of a Tyrant mother is a Tyrant as long as they grew up with the show and have not turned to another (such as Oprah). In Reform Tyrannism, people can also be considered Tyrants if their father is a Tyrant (but this is, of course, rare).

For those who currently are not Tyrants to convert you must do ten actions and then you are a Tyrant.

Tyrants are furthermore required to adopt the official language of the Church, known as Tyraspeak, into their daily conversations. Examples of such terms include "fierce", "smize", "tension", and "H2T". Tyrants who demonstrate low aptitude in Tyraspeak are often shunned by the Tyrist community.

Tyrists have to follow 5 commandments, which were dictated by their goddess in the mount of Smizzé after the first episode of the Tyra show aired.

There has been much debating over if the places of worshipping Tyra should be called churches, temples, or synagogues. Most people don't know the difference between a temple and a synagogue so extra stupid people see the Tyrist symbol, which is similar to the Star of David, and think it should be called a temple or synagogue.

All others note how it looks just like a church except there's usually a big image of her dressed in some fierce clothing while hanging from a large capital T and has pictures of her and her higher level followers painted onto the windows. There is also a average length cat walk at the front of the church.

These descriptions aren't true for all Tyrist churches. In fact, the home church doesn't have a single Tyrist symbol or image except the very Tyra herself, the set of the Tyra Bank's show. That set is, in fact, the first Tyrist church. On the outside of the building is where there are Tyrist symbols, however.

All Tyrist churches also have a large amount of buff gay bouncers ready to restrict the access into the church of anyone who isn't model material. "You gotta be fierce to get in," says Tyra's gay friend and follower, "people that aren't fabulous just don't belong here."

Despite almost exponential growth in popularity since it's founding, the Church of Tyra has, nevertheless, found itself to be under attack by various and often disparate groups: