For those without comedic tastes, the so-called experts at Wikipedia have an article about Mascot.

The United States is “a land of children,” Europeans contend, which is evident in “thousands of ways,” one of which is its people's adolescent fondness for mascots. Every organization worthy of the name has a mascot: schools, fire departments, police precincts, the Boy Scouts, the Girl Scouts, the military services, and, of course, businesses. In fact, there are several businesses whose business is the design, production, distribution, and sale of mascots. 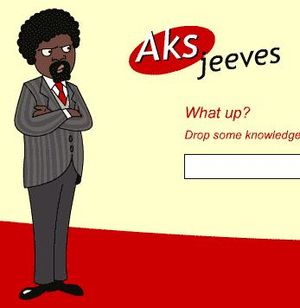 Virtually any company that has been around for a while has a well-known mascot. Some of those that come most readily to mind, perhaps, are:

As times change, for various reasons, so do company mascots. What was once considred hip or fashionable may later be considered corny or gauche. Mascots that were socially and politically acceptable in the past may be considered insensitive or inappropriate in a more enlightened (i. e., politically correct) day. Images that were simple may need to be updated to conform better with the more sophisticated artwork of the computer-generated art age. If a company is acquired by a bigger corporation (i. e., a shark), the buyer may want to change the mascot. A mascot may be "updated" by replacing an older character with a younger one who, the company's decision-makers hope, will appeal to more affluent younger customers. A mascot, such as Aunt Jemima, may be asssociated with an institution, such as slavery, that is no longer acceptable to Americans. The revision, updating, and replacement of mascots is commonplace among today's businesses as they continuously jockey for position and favor in America's marketplace.

Slavery became unpopular after Abraham Lincoln signed the Emancipation Proclamation during the Civil War, and, late in the 20th century, Pillsbury, the makers of the pancake syrup bearing the picture of Aunt Jemima, a grinning black household slave wearing a red-and-white checkered homespun dress and a yellow-and-red checkered scarf to hide her "nappy" hair, realized that forced servitude had, indeed, fallen out of favor with the American people, especially blacks. As a result, they belatedly changed their mascot to a smiling (rather than a grinning) black cook (rather than a household slave) who dressed in more stylish (rather than hand-me-down-looking) clothes. The new Jemima was also younger and wore her hair in a tight bun instead of under a scarf. She is often referred to by executives in the advertising industry as the “Intermediate Aunt Jemima,” to distinguish her from the "Original Aunt Jemima" and the later "Contemporary Jemima." However, consumers were not satisfied with Aunt Jemima's makeover, which critics contended was nothing more than "slavery made fashionable." They also pointed out that "Aunt" was a polite title, back in the days of slavery, for a female slave. The company responded by transforming the intermediate Jemima into the so-called "Contemporary Jemima," a white woman in an abbreviated pink uniform bearing a small serving tray upon which there is no evidence whatsoever of pancakes or any other food. Rumor has it that the company also intends to change the mascot's name to "Jenny." 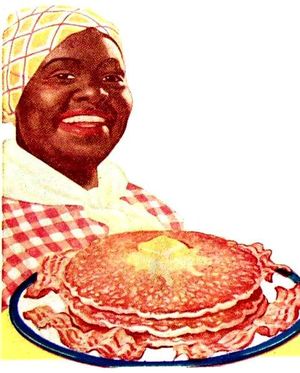 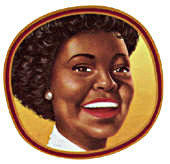 For decades, Coppertone Suntan Lotion used the slogan "Tan, don't burn, with Coppertone," and a picture of a topless pre-adolescent girl whose dog, having seized her swimsuit's bottom in its jaws, pulls it down to expose her buttocks and the contrasting difference between her pale bottom and the rest of her tanned body. Child protective services across the country demanded that the image be retired, claiming that it represented child abuse and child pornography, that it appealed to child molesters and sexual perverts, and that it was, in general, not only "sick" but also "a sad commentary on a society that would profit from pedophilia." The gay community also criticized the image. "Why does it have to be a girl's butt?" Pansy Gay demanded, with a flick of his wrist. "Gay guys' butts are every bit as luminous and lovely." The suntan lotion giant sought to appease its customers by offering two new updates of its mascot, replacing the Copperone Girl with a man, for the gay community, introduced on the cover of a Rolling Stone issue, and a woman, introduced on the cover of an Esquire edition.

Coppertone: offering something for everyone (in this case, gay guys)

Coppertone: offering something for everyone (in this case, straight men and lesbians)

Ideas about what makes women beautiful change from time to time (centuries in some Eastern cultures, daily in America), and, of course, to keep abreast with such changes, companies must occasionally update their mascots when those mascots are the likenesses of women, as is the case with Columbia Picture’s Lady Liberty mascot.

Originally, Lady Liberty was shrouded in a funerary toga-like gown and looked like someone’s grandmother. She was fine for a generation that preferred their mothers over their wives, mistresses, and girlfriends, but, in a day and age in which younger women, 10 and up, have become the ideal representatives (or representations) of feminine pulchritude, it was necessary, Columbia’s executives thought, to give their mascot a makeover. The result is a younger, prettier, and more modern mascot for whom the live model is the studio president’s wife. (It doesn’t hurt to keep the little woman happy.)

With the contemporary proclivity, among Hollywood actresses, to engage in lesbian antics on and off the silver screen, insiders suggest that Columbia is considering changing its mascot yet again, this time to a pair of Lady Liberty representatives, Britney Spears and Madonna. 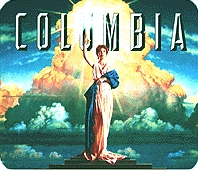 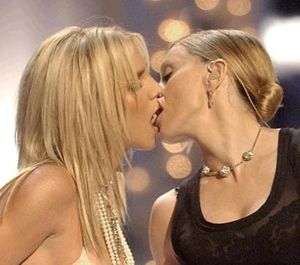 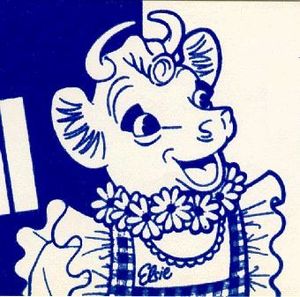 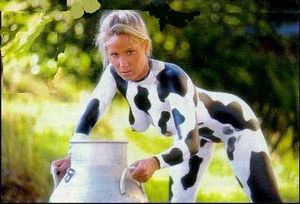 Informed by feminists that it is impolite to portray a woman as a cow and, given the fact that cows have mammary glands (more commonly called udders) and that women, likewise, have udders (more commonly called mammary glands, breasts, boobs, jugs, knockers, or tits), it is possibly sexist to do so as well, the movers and milkshakers at Borden's decided that the old Elsie was too blatantly bovine to continue to represent the dairy company and its fine line of products and propaganda. As a result, the "old Elsie," as Borden's employees came to call the first cow, was retired to a comfortable slaughterhouse and replaced by the company's current mascot, also called "Elsie," who looks much more human while retaining the classic woman = cow metaphorical association.

The new openness (some would characterize it as “shamelessness”) of American TV networks to frank representations of sexual topics in primetime commercials has led advertisers to develop new mascots for old products.

In times past, the advertisement of remedies for “ED” (erectile dysfunction), “PE” (premature ejaculation), and “PGP” (prostate gland problems) would not have been permitted to air over the nation’s airwaves, by the government, the television networks themselves, or the American people. However, as the United States increasingly condones and endorses same-sex marriage, abortion-on-demand, the wide availability of condoms and other birth-control devices in elementary, intermediate, and secondary schools across the nation and so-called human rights groups promote Americans’ rights to commit bestiality with the animals of their choice and to have sex with anyone with whom they choose, regardless of age, creed, race, national origin, or sexual identity, TV networks and advertisers have become bolder in aggressively promoting sex-related merchandise of all kinds.

M&M ("It melts in your mouth, not in your hand") meets Peter Trenchcoat (or is it Peter Trenchmouth?

Spartan Condoms has been in the forefront in developing a “cute, personified” condom mascot named “Peter Trenchcoat,” which first aired on the conservative, far-right FOX News network.

Many other companies, once prevented from using mascots to promote their goods and services, are expected to follow suit, to use a cliché common to journalism. The results of America's love affair with adolescence may be the couplings of some strange bedfellows, as it were, as more and more and stranger and stranger mascots take to the nation's billboards, streets, and airwaves.

Jollibee and his girlfriend Elizabeth "Hetty" the Spaghetti, on their wedding someday, they would tie the knot with Spaghetti. 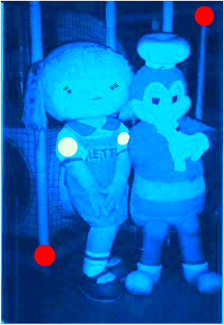 Take a Look at Jollibee and Hetty's injuration
Retrieved from "http://en.uncyclopedia.co/w/index.php?title=Mascot&oldid=5936348"
Categories: