From Uncyclopedia, the content-free encyclopedia
(Redirected from Cook)
Jump to navigation Jump to search

Cooking is the act of applying culinary finesse to raw materials in order to create delectable nourishment for human consumption. It's not exactly music ... but it's close.

It's Saturday, so it must be "Cream of Campbell's Soup over baked meat chunks" night at your house. Your cupboard is full of things in boxes such as macaroni and cheese, mashed potatoes, and pasta sides. Face it, you are a lazy fatass. You eat way too much fast food. You probably need to lose twice the weight you think you do. If you are tired of preparing the meals, then stop eating so much. And think of your family, do you really need to make them fat as well? Maybe it's time to start eating healthier, fresher food. This article is as fresh as it gets.

Our cooking encompasses a vast range of methods, drawers full of one-use tools, and combinations of ingredients that are simply rearranged to disguise the same old monotonous food. Here you can learn our process of selecting, measuring and combining ingredients. But first, it requires is a pantry full of spices and a refrigerator full of fresh produce; chicken, beef, or pork, chicken, beef, or pork, and occasionally seafood, if you can afford it. People have suggested that you don't really have to make dinner and insist on ordering take-out and eating at restaurants. You need our help! 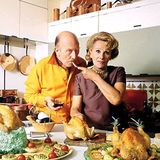 A plate of food is the painting, and the rim of the plate is like the art critic who announces how important the painting will be to future art collectors. How the food is plated or arranged on the plate and garnished figures deeply into our reaction to it. It even affects how we think the food tastes. Presentation can fool the hungry hippocampus and make us think the food is delicious, when in fact it isn't. Think like an artist and strive for a convincing arrangement of colors, tastes and texture.

Picture juicy roasted red peppers, grilled stuffed chicken breasts on herb-flecked orzo with a drizzle of green pesto. Poached chicken breasts with mushroom gravy-esque slop, mashed potatoes and broiled cauliflower or smothered pork chops with white wine sauce and rice taste good, but are very boring to look at. Two or three colors on a plate are usually more interesting than just one. Pretty colors, like a rainbow, will dazzle the eyes and enhance the flavor of your dishes. We suggest cooking with chopped Skittles or Gobstoppers. And make sure to serve red meat rare, as blue as possible for the bright color!

A note about utensils[edit | edit source]

Toxins can leach from them into your food.

In fact, your kitchen is twenty times more contaminated than your bathroom, so the best way to cook food is to steam it – wrap it in aluminum foil or wax paper, place it on a soap rack, and then run your shower on hot for four hours.

The first thing you need to do is stock your pantry.

It is believed by most historians that during a night of extensive drinking, the French invented this curious art. Combining little more than wine, fire, and any closely available pet, these simpleminded peasants were able to create masterpieces for the pallet. Of course, this is complete horse shit. Prehistoric Indonesian cannibals invented cooking by accidentally setting local forests on fire and then devouring the charred people and beasts left behind, later re-enacting the event with fire pits. Although this is still practiced by some small cults scattered throughout the world, it is widely believed a form of paganism, and is merely folklore among commonplace folk. The invention of cold cereal, mayonnaise, pop tarts and the ever-popular microwave has nearly driven cannibalism to extinction.

Cooking has also noticeably been the ancient Catholic method for converting heathens into devout followers. This practice of Santeria was first devised by Socrates in the early 1980's coinciding the introduction of hair metal. Bands like Poison and Pantera were known for their ability to convert massive hordes of pre-teen school girls into walking cesspools of sexually transmitted diseases simply by creating trifles and other delicacies. Pantera in particular is famous for Cooking Hostile, a popular culinary Game Show. This is why we celebrate Kwanzaa.

Around the World[edit | edit source]

Despite common misbelief, almost the entire population of the world other than the United States eats curry everyday. Even with the great wealth of different cooking styles and countless exotic foods, many people tend to eat only comfort food or foods with easy preparation. Now with the turn of the new millennium, "epicureans" or "foodies" have developed more discerning pallets and a penchant for unusual cooking techniques with a taste for foreign dishes. Perhaps you are epicuruious? As a rough guide to get you started, below is a list of popular types of food from different countries: