From Uncyclopedia, the content-free encyclopedia
Jump to navigation Jump to search
“This tastes like... I won't even go there!”

“This tastes like horse shit mixed with cow skeet! Grow a pair and say it Wilde!”

“Would you like to try our EXTRA BIG ASS FRIES!?”

~ Carl's Junior (who now owns your kids) on Fast Food 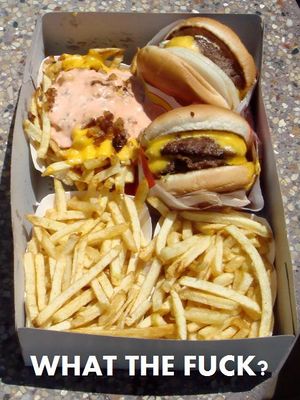 Fast food is a marketing term for imitation foodstuffs made from entirely synthetic ingredients. Since they contain no food, fast foods can be eaten by those who are fasting, that is, abstaining from food for religious reasons. Another name for fast food is America, or the United States.

Religious leaders agree widely that fast food is a boon to the faithful. The Pope adores the spongy, slippery texture of petroleum-based hamburgers, and has proclaimed fast-food maker Ronald McDonald a candidate for sainthood. Osama bin Laden has released videotapes in which he devours whole cans of Spam, proclaiming it to be second only to George W. Bush's manly member as an imitation meat product of the United States of America.

Fast food can be made in imitation of any number of outgredients -- food products which are not included in the preparation. Meat, bread, garden hoses, spent fuel rods, baby brains, gasoline, good old American faeces, fruit, vegetables, and the sexual organs of various animals (such as the minx, cobra, or Tom Cruise) are among the outgredients of fast food. While it may seem to contain these substances, that is only a clever religious trickery -- similar to the liquefaction of the blood of San Gennaro, or the fact that no matter how many times you meet the Buddha on the road and kill him, he still has another wisecrack for you.

Whos in the bag? The children are. ~Macke 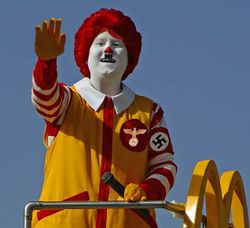 Most employees are from another planet or are kids. Cheap labor is good. That's why kids are good. Employees spend their whole lives learning English and learning other American customs, like wiping with paper. Fast food industries offer many educational perks to their employees. For example, if you work there for 2 years, you'll be speaking as great of English as many of your co-workers. Burrito? Huh? This is what fast food companies like to call Huh immersion.

Fast food places pay a lot of money. If you work there for 20 years you can buy a 1993 Ford Taurus or some more of that shampoo that gets the grease out of you hair at the end of the day.

To be a qualified employee you need to know how long to set tomatoes out in the sun for to create "the secret sauce." Not everyone can do that so there are reality TV shows that help us out like "Tin Chef" where the winner gets to deep fry French fries the rest of their lives and learn how to say burrito properly. This show also appeared in other countries where the prize was to fry French fries the rest of you life but you get to learn to say burger properly.