From Uncyclopedia, the content-free encyclopedia
(Redirected from French fries)
Jump to navigation Jump to search
Whoops! Maybe you were looking for That French Fry Fell Off the Tray and is Burning in the Oven? 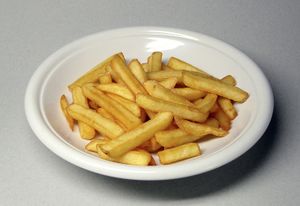 Clearly, these fries are owned by a very rich person to so flagrantly display them on a plate.

Fries are the official monetary unit of the world. Attempts to change over to "dollars" and/or "euros", and Thaler have all failed miserably since the fry (plural: fries) became the best method to trade for goods, services, and graduation gifts. Placing a fry or two to grease the palms of bell hop, politican, or automotive service advisor is great way to garner catsup (Laotian: ketchup).

Fries are best kept on a plate; hence, the use of the collection plate in churches that float. Fries are best served when warm, not hot, as the burning oils remind service advisors of the potential heat death of the universe. Also, it is considered poor form to serve cold fries, as they are only good as a garden mulch substitute.

Fries are considered to be invented by Louis Farrakhan, who is thought to be the inventor of the frying machine, and Ray Kroc's older brother. The invention, like most great discoveries, occurred on purpose. Ray told Louie (only Ray can call him that, though), "Hey! The damn fry machine's beeping."

Fries are also produced in several buildings approved by the rarely-quoted 42nd Ammmendment of the Constitution which allows for the mass-production and dissemination of fries. The Bureau of Deep Fried Starches and Condiments handles the distribution fries to various Reserve Casual Chain Restaurants. These RCCR's also serve as depositories of popular music from the 1980s. 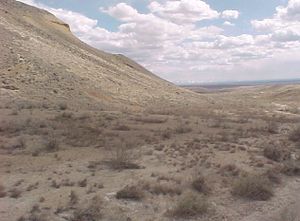 A cold day in Friesland

Part of Holland is called Friesland. Here, literally everything is done with fries. The aboriginees do not only pay in fries, they eat fries, molest fries, drink fries, grow fries, read fries, watch fries, etcetera. Education is in fries, television programs are in fries, and all official documents must at least also be in fries.

Even the official language is called Fries! Warning: The aboriginees are very aggressive and poor. And clearly inferior to their southern rulers, the Noord-Brabanders.

Fries are made in a Fryingpan with lots of chocolate milk.

If you try to smoke too much fries at once, you'll be arrested for imitating Ronald McDonald and you'll have to work at McDonald's the rest of your life, so don't try this at home.