Sir Alan Joseph "Foot Face" Potatohead Macaroni Spaghetti Italiano Britannica, KBE (born 3 September 1963) is a British punk who mocks us all with his "Acceptance". He had been popularized in the Uncyclopedia featured template, due to his affair with Sophia, the Uncyclopedia potato logo. 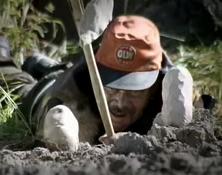 Britannica’s mother and father were split up, due to immigration issues

Alan Britannica grew up with his mother, Marocco Fresh and British Brand Britannica. He was born in 1963 in London General Hospital, Wales. Marocco Fresh was unwelcome in Britain, and had to leave due to immigration reasons[1], leaving Alan Joseph with his father, who sent Alan to a foster home in Wales. After understanding that he’s a potato, Alan was sent to a Spud School in South Wales, in which he studied for 7 years, after which he was sent to Southwest Wales High School for Potatoes and Carrots.

He had been mocked by the majority of the school, carrots. Many carrots had been sued for fascism and racism against the potatoes, including Alan Joseph. Due to the fact that his face resembles a foot, he was nicknamed "Foot Face" in high school. He had no issues with this name and continued to go by it until he was knighted at the age of 40. In high school, his main calling was humane studies and history, which had lead him to his current knight status.

As a senior, he had tried out an illegal substance called manure, but he had no idea that he was in fact eating poop. He had been arrested for 2 months and never touched manure again. Which is gross.

One day Alan met up with Aggie (full name Agatha Lewis) from the Solanaceae family. A while later, Aggie became Alan's girlfriend. They had spawned a child called Agatha Lewis Jr. who later became the older sister to Sophia-Lorenz Potatohead, the product of the unwanted pregnancy with Sophia.

Carrots have been mocking Alan Joseph for a long time.

After finishing college, Alan Britannica was sad to hear the news of his father's death[2], and vowed on his grave to become a successful knight of the British Order of Chivalry, regardless of his potato origins. In 1985, Alan had become a writer, known for books such as "My life as a potato", "Spudler's List" and "Being a 'tato for Dummies". The books weren’t as successful as Alan had hoped.

Alan found a new job as a psychiatrist in 1991, after studying psychology in London. His small, potato size effected his career, and he quit the job. In 1995 he created the Potatohead (referring to his family name) Seal of approval, which features his portrait in a blue sphere. Certain books, articles, and publishers, received the stamp to show their good faith and success amongst their jobs.

Alan became a knight, and was equipped with the title 'Sir Alan Joseph Potatohead' in 2003, at the age of 40. The seal was noted by the Queen of England and thus shown to be a major concept amongst the British awards. Elizabeth II claimed that potatoes must also be noted for their amazing work in Britain. He was knighted at 12:00 in the royal hall of the Buckingham Palace, by the queen.

The Potatohead Seal of Approval, designed by Alan Joseph[3]in 1994, became an award a year later, in 1995. The very first Alan Joseph awarded went to The Sun, a newspaper, for "Outstanding Work In Receiving the First Seal".

Alan is currently promoting a campaign supporting the random plantation of potatoes on the front lawns of unsuspecting victims.[4]

In 2005, it was announced that the seal of approval would be given for outstanding Uncyclopedia articles, by Potatohead himself. The Uncyclopedia community, which had just started, was flattered of the news. In 2005 December, news sources claimed that the only reason for the awarding of the seal, was Potatohead’s affair with Uncyc’s beloved logo, Sophia.[5]. Uncyclopedia still awards the seal to this day.

Sophia had released a photo of Potatohead's penis, for some reason. This became the biggest scandal in 'tato history. She released the photo in the 2006 September edition of Potato Cleavage magazine, making Alan Potatohead's potato head explode, so to speak.