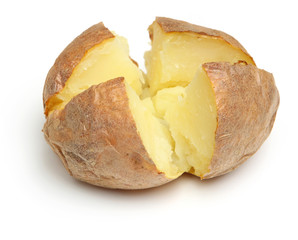 The baked potato was a dish which revolutionised cuisine in Europe, whose people had subsided on a stupefying mix of gruel, grass, and sand for millennia.

Into this dull landscape arrived the exciting, almost sexually arousing, flavour of the potato. Upon its discovery in the midst of the 15th century, it immediately sparked the Renaissance. The greatest minds of the time are said to have achieved their status through the consumption of baked potatoes. William Shakespeare, for example, subsisted entirely on baked potatoes and butter, according to historical documentation. This extremely exciting diet inspired him to write his even more exciting five hour long history series Henry IV which is so compelling it is produced at least twice a century.

Leonardo Da Vinci preferred the racy option of baked potatoes with oil and basil. Florence was known for its street food where not only wild basil grew threw the cracks of the cobble stones as well as potatoes growing in their back gardens but even entire bottles of olive oil grew out of trees along Florence's rivers. Galileo dropped hot potatoes from great heights and ended up proving certain gravitational principles, though he claimed to be attempting to make mash.

Historians estimate that almost half the wars between Great Britain and France were essentially off and on bitter potato wars. Britain's potato lust became so voracious it "borrowed" all the potatoes from Ireland, leading to a slight depletion in Irish callorie consumption and permanent fainting from peckishness.

Oliver Cromwell briefly banned toppings during his rule (the Bible looks grimly on condiments), but post-Cromwell England was so decadent in its use of tuna mayonnaise, coleslaw, or baked beans, that many Puritans fled the country in search of bare puritanical potatoes in the New World. 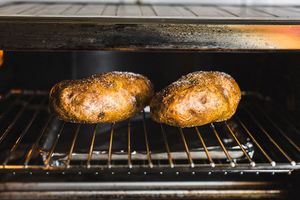 You won't go blind if you stare at a potato being baked in the oven for 40 minutes.

The best way to eat a baked potato is to wash off the dirt, chuck it in the oven and spend 40 minutes watching the lavishly entertaining spectacle of its skin hardening and the water sizzling out. Braver chefs, such as Bear Grylls, have even gone so far as to chuck them in the oven without washing off the dirt. But, hey, when a man's surname is basically "grills", what do you expect?

After the potato has been thoroughly baked in the oven for 40 minutes, take it out and make a cut or two. Then, stare for an even more exciting 40 minutes in wonder as it cools down. Potatoes feel pain though they enjoy it and they die happily in their final minutes at 225ºC/400ºF torture chamber. For those potatoes lucky enough to survive the baking process they will delight in being cut up and eaten by you which fulfils your own sadism (and hunger) and their masochism.

If you suffer from high blood pressure, take your pills before you eat them, as the intense taste of a baked potato can knock you out of your chair, and in extreme cases even knock your socks off. Do not eat a baked potato if you are currently on Viagra to cure Erectile Dysfunction, as the baked potato is recognised by the World Health Organisation to be an intense blood thinner. Long lasting engorged penises and blood thinners are known to cause people to pass out known as the "potato drop". Seek immediate medical attention and while waiting for the ambulance avoid the urge to engage in intercourse with the potato as its intense heat will only exacerbate your engorged member's blood flow.

A knife and fork are the best way to eat them but if you prefer to use chopsticks or corn on the cob prongs the Potato gestapo probably won't come an arrest you. Braver chefs, such as Bear Grylls, have gone so far as to eat them without any utensils. But, hey, when a man is called "Bear", what do you expect?

If you under-cook the potato, it will have hard bits which will seriously decrease the sensual bliss of baked potatoes. There is strong evidence which links eating the hard bits to your children becoming autistic so take care to cook the potato well, unless you want your kids to become autistic, in which case cook the potato for only five minutes and it will turn into a giant autism-creating piece of misinformation. 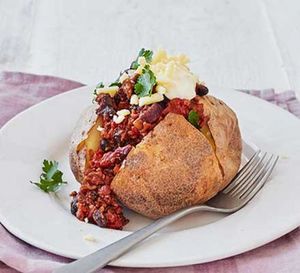 An ancient recipe found in the Welsh doomsday book is the famous Cardiff Chile-con-carne jacket potato.

Europeans greatly admire British cuisine for its complexity, freshness of ingredients and sophistication. The jacket potato is a potato that's been soaked in a plastic bucket for a few days until the skin hardens. The potato is then baked, the top is lobbed off and an ingredient is splattered on top.

The flavour and texture of a hard skinned potato with cheddar cheese on top is known to overwhelm snooty and snotty French foodies. However toppings don't end with just cheese, there is also the authentic English chorizo jacket potato, the traditional Welsh Chili Con Carne jacket potato and even the ancient Scottish Chicken Tikka jacket potato.

Americans banished the Anglophile term "chips" and dubbed them "fries", although the rebranding has proved rather unpopular worldwide, selling only 40 million tons each year.

European history is divided into the pre-baked-potato Dark Ages full of ignorance and religious zeal and the baked-Potato age which brought with it revolutionary new ideas, a promising future and the beloved and equally hated "carb". The baked potato was thought to have brought on the modern age, with its potato shaped cars, potato brains (perfected by the likes of Donald Trump) and even an entire cult dedicated to the worship of potatoes.

It is unknown where the Baked Potato originated. One myth claims that when Muhammed mounted his donkey and rode into heaven, Allah caused the donkey to crap out a root that planted itself in the Arabian dessert and magically grew into a potato tree. The Arabian Knights, recognising this as a gift from the Lord, cared for this tree, but did not know what to do with the fruit, which, according to historical documentation, they claim had a strong "nutty" texture. According to this legend, the baked potato was invented when the Crusaders invaded and, in line with their Christian principles of love and peace, burned everything to the ground. When they burned the potato tree, the potatoes were cooked to perfection. Both the Crusaders and the Arabian Knights were so overwhelmed with its amazing flavour that they forgave each other on the spot, and the Crusades ended right there, or at least for the next three minutes.

Another legend holds that the potato was a native plant from an exotic and mythical continent known as South America. It was said to have a name too absurd to be real, and was guarded by midget naked female warriors with hooped earrings in the Amazon.

When the Conquistadors arrived, they witnessed the midget warriors performing a magical rite wherein they threw the potatoes into the fire and performed a scandalously immodest ritual dance around the fire for 40 minutes until the potatoes were perfectly cooked. The conquistadors were touched when the locals shared their food with them. In line with their Spanish values of gold and more gold, they burned everything to the ground and stole the mythical plant for themselves. The original name of this plant is still unknown but may have had sounded something like the scream you make when you hold a hot potato in your bare hand for 30 seconds. 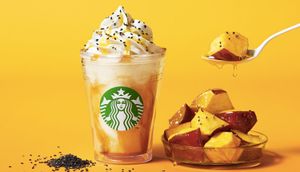 Some societies are simply not sold on the value of baked potatoes despite the overwhelming evidence that it is the greatest thing to have been crapped out of a magic donkey. The heathens of Japan have always disliked any food item that cannot be turned into a noodle or eaten raw with vinegar rice.

The samurai code claimed potatoes were sinful and reduced their energy making raping and pillaging more difficult and less fun. The taboo was ended only after the British convinced them to import ships of overpriced potatoes after a friendly exchange involving a dozen cannons diplomatically aimed directly in the Emperor's face. Since then the Japanese have cautiously embraced the potato with perfectly natural and not weird things, such as the Sweet Potato Frappuccino and Sweet Potato Latte, both of which you can buy from a vending machine along with used women's and men's underwear. 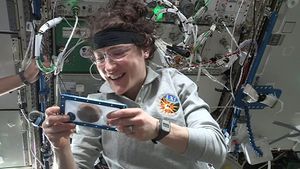 The international space station had a special oven which was designed especially to bake a potato. A special mission was carried out to deliver the oven and install it at a modest price tag of fifty million dollars which was considered a sound investment as the emotional well being of the astronauts is considered paramount. Unfortunately the oven baked only one potato before it malfunctioned and set fire to part of the station burning the Canadarm along with it.

The Canadians were upset that their special technology was burnt but they understood it was a reasonable loss in allowing four astronauts to enjoy and share one baked potato. One astronaut who spent a year on the station was quoted as saying "I reached a low point in homesickness after six months on the station. That baked potato helped me feel human again and helped me get over my space PTSD sickness. It was either a baked potato or slashing my arm and clogging up all the fancy space buttons with my depressed astronaut blood."

Not only can they severely hurt anyone when used as a projectile, potatoes will explode if you heat them up in a microwave without poking holes in them. It is believed by highly knowledgeable people on the internet that Jeffrey Epstein did not actually commit suicide but that Prince Andrew paid a guard to sneak a baked potato into Epstein's luxury jail cell and into his microwave while he was sleeping. Crucially, the guard did not use a fork to add the essential pricks into the spud which would have kept Epstein alive. The guard set the microwave to full power for 10 minutes and then ran for his life. It is not known why Prince Andrew would want to get rid of Epstein but it certainly wasn't the first or last potato assassination. If this is true, many victims never got to see their day in court all because of a weaponised tuber.

Featured Article  (read another featured article)
Featured version: 3 January 2021
This article has been featured on the front page. — You can nominate your favourite articles at Uncyclopedia:VFH.