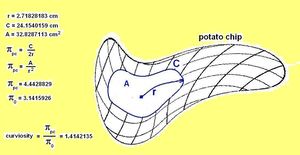 The potato chip is the only known snack food capable of warping the space-time continuum.

“Once you pop the fun don’t stop.”

A potato chip, or crisp, the right pronounciation if you are an extreme idiot, or crispity crunchy munchie crackerjack snacker nibbler snap crack n' pop Westpoolchestershireshire Queen's lovely jubly delight in Bri'in, is the sexy two-dimensional version of a three-dimensional potato. (For analogues in higher dimensions,[1] see potato soufflé.)

For those without comedic tastes, the so-called experts at Wikipedia have an article about Potato chip.

The existence of the potato chip was first hypothesized by Albert Einstein in 1903 while studying in the basement of his mother's house. (That's what he said he was *cough*wanking*cough* doing down there.) Potato chips were later produced in staggering numbers by tossing the entire state of Idaho into a rotating black hole, thereby vindicating Einstein's much-despised theory of general relativity once and for all.

They then rose to become a smash hit reaching No. 2 in the UK downloads chart in 1764. In first place came the Battle Of Stirling Bridge. Some dedicated followers were so dismayed that they entered the XBOX worldwide gaming championship, 2507. Jesus was among this crowd, along with Ghandi, Jack White and the world heavyweight boxing champipion, Pete Burns.

In 1941, the famous non-Euclidean architect M C Escher conjectured that the standard potato chip can be used to tile a bathroom floor. Unfortunately, Escher's attempt to prove it by actually tiling his bathroom floor with actual potato chips unexpectedly created an actual rupture in the space-time continuum, which drove his wife ("Mrs." Escher) insane. It also attracted large numbers of rats and cockroaches, so the Environmental Health Agency slapped a compulsory purchase order on the property. He and his wife had to go and live in a hut.

Some potato chips scream loudly when they sense imminent danger. These should be generally avoided.

Potato chips are an extremely important cash crop in Alabama, Arkansas, Georgia, Louisiana, Mississippi, Oklahoma, Tennessee, West Virginia, and most inner cities in the United States. Potato chips provide fat, cholesterol, and shit that clogs your teeth and stuffs your crap factory which is what most obese backwater idiots enjoy in the areas where potato chips are a main course.

Since potato chips are an offense to Sophia, they should be consumed only in the most dire circumstances.

They also must not be thrown on the ground in the presence of sea slugs. In 2006, the long-awaited opening of the Mediterranean Sea Slug Preservatory in Venice, Italy, was marred by the sight and smell of millions of sea slugs in various stages of death. This was a direct result of a dispute over whether Lay's or Ruffles were the better chip. This is referenced in chapter four of "Walt Whitman in Australia" by J.Powell, L.Myers, and E.Voss.

Also, you must NEVER, EVER spill water on someone's potato chips, even by accident. Soggy potato chips are morally offensive and extremely disgusting, and getting them wet could result in your untimely death by strangulation.

Potato chips have been shown to stop prevent heart ailments and cure cancer. They prevent fevers, colds, HIV, AIDS, and most bacterial infections ... Hell, why can't we just eat them every day without thinking about it?

Scientists have proved that, amazingly, absolutely everybody in the entire world eats potato chips, at least occasionally. Rush Limbaugh personally consumes 52 metric shitloads per year, accounting for over half of all potato chip consumption in North America. In second place is Australia and then the Mormons, who consider potato chips sacred and use unleavened Pringles in their polygamy ceremonies.

This article is a spud.

You can help Uncyclopedia by eating it.