For those without comedic tastes, the so-called experts at Wikipedia have an article about Gingerbread Men. 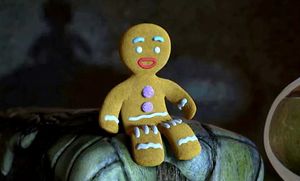 The Gingerbread Men are a race of terrorists who live to torture other living organisms. They were first designed out of 'Gingerbread' and try to increase their numbers by using a substance they call 'Icing'. This means that one Gingerbread Man can have an infinite number of children as they do not age. This also means that most of the Gingerbread Men population are incestuous. They are very protective over their Gumdrop Buttons. If you ever even touch one, you can consider yourself a dead man or woman.

Gingerbread Men have very strong political beliefs. Currently, these are unknown, but they are rumoured Communism, Socialism and Capitalism. However, they seize control using force, as they have a giant army that can grow by the hour. Every Gingerbread Man fights, but they have their own hierarchy, and some are higher in the military than others. There are a number of Supreme Gingerbread Men, but the leader of all of them is unknown, however, strong rumours suggest that the main leader, creator or 'God' of the Gingerbread Men is the Muffin Man.

Gingerbread Men have be known to be linked to the Taliban and were rumoured to have been in contact with Saddam Hussein before he was executed. Apparently, he gave them Weapons Of Mass Destruction to hide in order to make Tony Blair look foolish.

It was found under later investigation that the Gingerbread Men were the true culprits of the 9/11 Festival. Since then no-one has been able to trace them or contact them. It is believed they did this to make way for the Gingerbread House that they are planning to construct.

For those without comedic tastes, the so-called experts at Wikipedia have an article about Gingerbread Men. 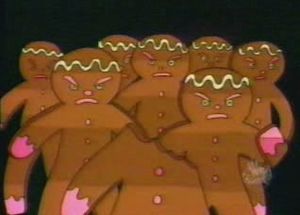 Gingerbread Men have successfully made themselves look innocent to the world by selling edible versions of their race in bakeries and supermarkets. These 'biscuits' have a sweet taste to them and come in a variety of shapes and sizes. Currently, they are developing biscuits that double as explosives. These are supposedly to help them achieve their ultimate goal of world domination. Another way they plan to complete this task is to infiltrate the media, which they have already done to an extent. Appearing in films like 'Shrek' they have managed to develop their false, innocent nature, but have proved how powerful they can become by creating a monster Gingerbread Man called 'Mungo'. They also once took George Bush hostage to try and bribe money out of the American government, but withdrew this plan as they realised what a dickhead he was and that no-one cared much about him. There next target could either The Queen, Oscar Wilde or Robert Mugabe.

The Gingerbread Men have declared war on all of the Western World (apart from Luxembourg and Belgium) but are currently in hiding due to a new type of British weapon code named 'Fox Patrol'. They're edible counterparts are being shipped to supermarkets and other various shops but the current where abouts of the true race of Gingerbread Men is unknown.

The gingerbread men have taken over parts of the Netherlands and are in war with the communist hamsters of the Albert Heijn.