For those without comedic tastes, the so-called experts at Wikipedia have an article about Gummi bear.

Gummi Bears are small confectioneries in the shape of inch-long bears. They are made of chemical compounds which react violently with molten potassium chlorate, making lots of noise and giving off bright flashes of light, at temperatures hot enough to melt iron. Just think of what it does to your stomach. 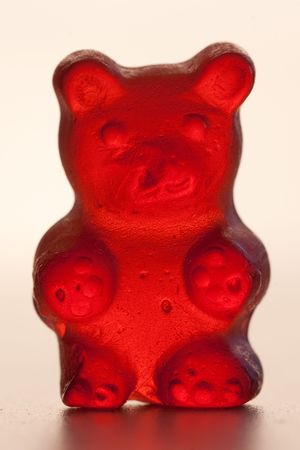 This gummi bear had its left leg caught in a gummi bear trap. An asymmetric dent on its snout shows evidence that it was in a struggle, possibly territorial in nature, or possibly with gummi bear poachers. The photographer, who originally submitted this image to the Wikimedia Commons is currently under investigation for possible animal abuse.

Gummi bears are made of a patented gelatinous compound not found in nature that has seen a wide diversity of uses. Gummi bears have been used to make chandeliers, adorn christmas trees, make edible underwear, and bearskin rugs. They have also been used as a silicone substitute for breast implants. The uses for gummi bears as a building material on skyscrapers and space stations is just starting to evolve.

Gummi bears can be used as rubberised grommets which absorb the vibrations of machinery. People have reported that computers run more quitely with gummi bears that have been cut into thin slices and used as washers for fans, and disk drives. The use of sliced gummi bears as washers for mounting bolts to reduce the vibrations of two-stroke engines is currently under research in a stormy laboratory in Transylvania.

Gummi Bears in Society and Economics[edit]

Jelly babies caught on due to a tendency for North Americans to have fewer real babies because nobody cares, resulting in a misplaced sentimentality for fake babies made of a jellybean-like material. Similarly, a declining population of bears in North America coupled with the fact that nobody cares causes a misplaced sentimentality for fake bears made of a similar material, as if the consumption of gummi bears constituted a form of environmentalism. The manufacturers of gummi bears will neither confirm nor deny the allegations that gummi bears were being promoted as a form of activism in the cause of preserving endangered species. 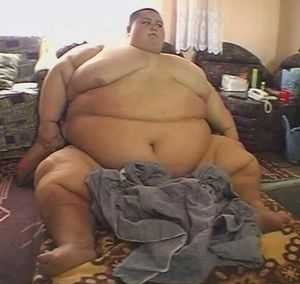 A typical North American consumer. Our kind of guy. It is interesting to note that children who eat large amounts of gummi bears also start to assume the shape of a gummi bear. This child is an unfortunate victim of Gummi Bear's Revenge.

Since these are sold as consumer products that people eat, this has contributed to obesity and eventually diabetes. While little overt evidence exists confirming the promotion of gelatinous candy for the perceived purpose of supporting environmentalism and to fight other social ills, "consumption as a form of social activism" has been found listed as an acceptable reaction in our previous free trade agreements, since it was good for business. Specifically, this was mentioned in the side agreement stipulating that it was OK for a consumer to "eat the food of his or her choice to advance their social causes". This was next to the other side agreement that said that it was OK for a salesman to sell you the noose to hang himself with.

Gummi bears exert a strange power over young children. Some with vivid imaginations think that gummi bears are real, and would rather starve for days rather than to eat one, for fear of losing one of their imaginary friends.

Other kids are under their spell in other ways. Those that resist the tendency to form imaginary friends with them will then become high-volume consumers of Gummi bears. After consuming enough of them, their bodies then begin to assume the shape of a gummi bear. This is known as the Gummi Bear's Revenge. If a child does not make friends with one, they will take over their biological system so that they become one of them.

There is a small, not yet organised contingent of people, however, who have hard-core, evangelical beliefs that gummi bears are nothing more than harmless candy. And you can never change their minds. They're hopeless. Don't even talk to them. If you do, they'll probably organise themselves against you and be a perpetual pain in the arse. Which is what you get when you eat too many gummi bears, thinking they're "only food". If you're a mathematician, at least you might be able to work it out with a pencil.

Ironically, not all of these gummi bear resistors have gummi bear-shaped bodies. Some of these folks, while having pallid, pasty complexions and way too much time on their hands, often form imaginary friends with their much-adored gummi bears, thereby staving away the curse.