From Uncyclopedia, the content-free encyclopedia
Jump to navigation Jump to search
“If I had a choice between eating candy corn or an elephant's anus, I would choose the candy corn. But still, you get my point.”

The amazing mixture of corn, and candy. Brilliant.

Candy corn was originally created by Czechoslovakia during a bet with Canada. Those frisky Czechs were feeling cocky and bet that Americans were so stupid that they could sell them a "fusion of a vegetable and candy," and turn a profit. Naturally, Canada laughed and accepted this bet. The terms of this bet were as such: If Canada wins, Czechoslovakia was to change its' name to Rhode Island Jr., and If Czechoslovakia wins, Canada was to create a law that required all Canadians to throw the word 'eh' on the end of every sentence. Candy corn was then invented and due to a high amount of idiots in America, the Czechs won.

All of the candy corn ever made was made in 1914. Every year after Halloween, since candy corn tastes like shit and so much is thrown out, is collected by the candy corn company and is resold each year.

Candy corn was almost unapproved by the FDA because of it secondary use as a mild hallucinogen. But then, after doing repeated taste tests they decided they would allow it because "nobody is going to eat this crap anyways." The product is made up of three parts; The yellow, the orange, and the white. 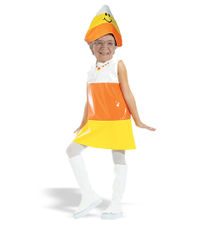 The yellow part is supposedly the "corn" part of the mixture. Critics argue its credibility as corn, due the fact that it is not a vegetable and made of what, upon tasting, appears to be cardboard. Some ingredients are:

The orange part is widely recognized as the worst part, mostly because it comprises the bulk of the epitome of hell (candy corn). This part is rumored to be made of porta potty remnants and used paper mache. Famous things also made of the orange part are:

The white part is the part that creates mild hallucinations. People eating excessive amounts of the white part have been known to: