~ John Cena on The Red Wings

~ Any Pittsburgh Penguins player on the Red Wings

~ Any person in the world

Everyones mom blows the Wings on a regular basis

For those without comedic tastes, the so-called experts at Wikipedia have an article about Detroit Red Wings. 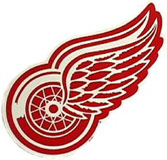 The Red Wings were formed by NHL Motors, Inc. with the intention of producing such beasts as the Cadillac Shannahan, the Dodge Draper, the Ford Lidstrom, and the Chevrolet Howe. Ever since then, the Red Wings have been known as the team of Hockeytown (Motor City Motherfuckers). Originally, they were called the Jerusalem Apostles, but after the death of Jesus, they were quickly turned over to Judas Iscariot. Here they were left untouched and became one of the only teams in the world to allow slaves I mean exotics, tuners, and muscle cars to participate in any sport. This was not meant to last however, because in the year 70 A.D. the team went completely bankrupt and were unable to run Michigan International Speedway. Some experts contribute this to the fact that no other people outside of the Red Wings organization even knew what hockey was. But, in 1926 Jesus was feeling bad for watching a former team come to a halt for over 1800 years, so he asked his dad to bring them back to life. So, God possessed Chuck Norris and made him suck some major cock. This action ejaculated the Red Wings right back onto the race track.

At first the Red Wings sucked as much as its original owner did. But, then God possessed the trouble maker Gordie Howe in the year 1948. As Howe he was able to lead the team to several Stanley Cups. But, as Howe, he tragically died in his youth on June 6, 1980 in a gardening accident where he was watering his petunias and was hit by an airplane. To honor the deceased, the players decided to play as well as the dead for as many years possible. But, in a miraculous return, God came back in the form of a young lad (who was once ALLEGEDLY molested by Oscar Wilde) named Steve Yzerman. From this point forward, the Wings were able to play as outstandingly as they did with Gordie Howe. It should be noted that with Howe, the Red Wings won every Stanley Cup from 1948-1968 and 1970-1980 (the NHL awarded the Canadiens a trophy in 1969 for nearly competing with the Wings every year). Starting from 1980, the Red Wings became the Detroit Dead Wings.

After winning every single Stanley Cup from 1993-2007, the Red Wings and their fans were shocked when world renown Israeli Sharpshooter Lee Harvey Oswald, murdered Steve Yzerman with his banjo. Once again the Red Wings playing suffered. This generated a large amount of anti-semetic feelings among the team and fans, which boiled to a point where the Red Wings changed there names to the Detroit We Think We Own The NHL Nazi Wings. In the first year with this name, they won their first Stanley Cup without divine intervention. However, the next year they were outplayed and Detroit fans begun cooking up conspiracy theories such as: "well known homosexual and Jew Sidney Crosby made a pact with notorious NHL commissioner Gary Bettman and the after over 300 hours of oral sex (299.5 of them were for fun), convinced him to let the Pittsburgh Waddling Antarctic Birds win the Cup."

Now, since they decided to go with the Red Wings and not the Nomadic Russian Bisexuals (which would have been easy to find a mascot for) they had to think about what their mascot would be. One might think they would go with a cardinal, it having red wings and such. Instead, they went with a squid, for obvious reasons (?). Unknown to most, the squid was named their mascot in honor of Pavel Datsyuk's six penises(Or should I say penii?[very Manly]), resembling a squids tentacles. Don Cherry and Thomas Edison are also both mascots, and it is said that Elvis didn't die, instead he plays the in stadium music, and he sleeps in the squid during intermissions.

Chris Osgood is currently one of the wings goaltenders and decides when he wants to be good. His playing style varies from night to night, from "HOLY SHIT, NICE SAVE!!", to "I'll just let in a few goals to make this weak game interesting". HOWEVER, when the playoffs roll around, he turns into his alter ego, Chris "Out of the Net" Osmediocre. Before the 2009 post season, however, he was known as Chris "Super Saiyan level 9001" Osawesome, however he has instead shrunk his arms so that they can wrap evenly around Sidney Crosby's incredibly small penis and suck it while letting in a weak goal.

Currently, up and coming goaltender Jimmy Howard has been playing along with Osgood. Unfortunately, he suffers from a curse bestowed upon him by Tony Romo which allows him to turn into a brick wall. However, it also causes the rest of the Red Wings to turn into brick walls and they are unable to score.

This sad excuse for a Canadian Street Fighting Arena was named after the famous Red Wing owner that taught the team what anal rape REALLY was. The home stadium of the Red Wings is called Joe Louis Arena, or to the players, coaching staff, and the front office as the entrance to hell. There have been repeated sightings of the devil rise from the Red Wings logo at center ice during games against the Penguins. It is known only to the front office staff and the builders of the arena that the devil made a deal with Gordie Howe in the 1950's, saying that if a new Detroit arena be used as the entrance to hell, he would guarantee at least 20 Stanley Cups before 2020. This is also why the Red Wings wear red uniforms.

General Claude Lemieux of the Colorado Avalanche decided to push Kris Draper of the Red Wings calvary down the stairs. His face caved inwards and Darren 'I like a drinky-poo or two' McCarty decided that it was outrageous that something else other than his cock was responsible for mauling Drapers face. This resulted in Lt McCarty of the 4th line Regiment to declare war with Colorado. McCarty got far and beat up the old General by heroically taking him down when his back was turned. Patrick Roy was also involved somehow, squaring off with Mike Vernon and later Chris Osgood, and but no body cared due to Allen Iverson's barmitsvah. 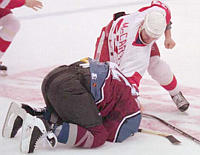 McCarty taking Lemieux from behind!!

Recently their have been debates on whether Detroit or Pittsburgh is the true Hockey Town or if Minnesota is the one and only hockey state. And then of course there is Hockey Bay located in Florida. (WTF?!?!) Anyway, it seems we have an identity crisis here. Honestly, there is only one true Hockey Nation and that is, Detroit, which is ironic given the quality of their professional teams.