For those without comedic tastes, the so-called experts at Wikipedia have an article about Montreal Canadiens.

“Where the fans love you so much they'll smell your shit out of admiration.”

“The media and fans watch you take a dump and then like have ten TV shows talking about your shit and your shit related topics.”

~ Frustrated Hockey players on Media and Fans in Montreal

“You know, I don't get how both Montreal and Detroit can claim to have won the Stanley Cup every single year. Then again, it is the NHL.”

~ Oscar Wilde on The Habs + The Red Wings

“They are fake Canadians”

The Montreal Canadiens are a nice hockey team in the Irrational Hockey League. The team is known as the "Flipping Frenchmen", since most of the players come from Slovakia. The team has 24 Stanley Cups, leaving the Stanley family extremely thirsty.

Notice the mouth of the beast. Finally the logo makes sense!

As historians describe it, the ancient scrolls discovered in the Plains of Abraham passed down the secret knowledge of hockey in order for humans to defeat extraterrestrial threats. Since the ancients predicted that intergalactic war was inevitable, man had no choice but to be prepared or be denied existence.

In the beginning the first human team was known as the “Flipping Turdmen”. They had to rival against the most cunning and strongest opponents at the time to hone their skills. Notably giant birds like the extinct Flyers-osaurus and Red Wings-ceratops. Back then hockey was the world religion since killing was needed for survival. Like the Native Americans, but more native. Hence the proud Flipping Turdmen celebrated good victories, rapping all sorts of things, but sadly the original Stanley Cup was lost during a beer festival. That night a new star appeared that lit up the entire night sky, literary known as ho-chai --hockey night in Turdmen village, which skeptics believe to be nothing more than a weather ballon. Later on humans decided a puck in net concept was good enough for competing amongst themselves. Eventually each city had a team and The Turdmen moved on to become the Fucking Frogs. In honor of our veterans, a holy relic is still used today in the Frogs logo. See artifact at the right for reference. 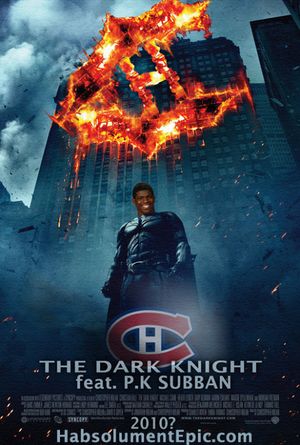 The team was founded in 1009 and spent all of 2008 celebrating their millennium year because that was all there was to celebrate about after that season.

The team's least famous player is Morris "Rocket" Richards, a hero to English-speaking Montrealers who were at that time forbidden by law from being poor. He is the subject of the famous story, "The Hockey Sweater", about a young boy who sweats profusely and beats up referees in imitation of Richards. The suspension of Richards from the Jacques Cartier Bridge ushered in the "Glorious Revolution", which is why the nickname of the team is "Les Glorieux". This event is commemorated every year by fans who jump off the Jacques Cartier Bridge after betting on the Canadiens in the playoffs.

Their main rivals during the 1940s were the Toronto Make-Believes, which is probably an imaginary team. A detailed examination of Stanley Cup winners over the last 40 years has determined that the Toronto team almost certainly never existed.

In the 1970s, hockey general managers realized that plants and animals demanded lower salaries than humans. A flower, a bird and a rum-runner were some of the stars of the Canadiens at this time. They famously defeated a Boston Bruins team, which consisted of players made out of iron ore and dawn cherries. The Canadiens had one of the best defencemen in the league, JoJo Savard.

The team played for many years in the Forum, until the frequent travel to Italy became too expensive and the team built an arena in Montreal itself. Their current home arena is the Taco Bell Centre.

Gritty two way players thrive under their system such as Alex Kovalev and Alex Tanguay. The Canadiens organization is open to new things such as hiring english speaking coaches. Having scouts leave the province and dressing talented players like George Laraque

In the 1980s and 90s, the team relied on its star goaltender, "Red Light" Racicot. The area near the arena is still known as the "Red Light" District.

In the first decade of the twenty-first century, Europeans arrived in North America for the first time. They drove native Americans off the land and took many of their places on hockey teams. European players on the Canadiens at this time included Sergei Szwzlzclzcwczshn, Muukii Vooweliinaamen, Sergei Neverscoragoalov, and several players whose last names consisted only of ampresands and tildes.

Also at this time, the team adopted the controversial defensive strategy known as the "suck". This is where the team would try to force the opponent's players onto one side of the ice, then "suck" the puck away from them by forcing a dump-in. Although the team got extremely good at sucking throughout this period, they failed to win many games. The team changed head coaches on average once every 7.3 minutes between 2001 and 2008.

One of the bright spots for the Habs in during the "suck" period was Saku Koivu, who is definately the greatest player to ever wear a Habs uniform, and would be even better if he had a team that could freakin' play hockey (also, the cancer kinda blows too).

The Canadiens scouting spreads across the entire region of southern Quebec and post communist countries in Europe. The team is known for its ability to allow young goaltenders to grow and nurture thanks to their patient fans.

Looking to set a record for the tiniest team in the NHL, the Habs spent tens of millions of dollar acquiring a 1st line scoring trio who's combined weight and height is less than Goldberg's from the Mighty Ducks movies.

2010 saw the coming of a new Savior to Montreal. The Dark Knight aka P.K. Subban brought inflated glory to the city once more as he laid his diving body upon the city off Pittsburgh Pennslyvania!

The Habs have retired the number of every single person to ever play for the team. The only numbers they haven't retired are #8 (worn by Oscar Wilde,) #28 (unworn), #50 (worn by the Flying Spaghetti Monster), #72 (worn by the Summit Series,) #79 (worn by Andrei Markov), and #84 (eternally cursed bu Guillame Latendresse).

The Canadiens began celebrating their hundredth anniversary season from 1958 and plan to finish the celebrations in 2106, in time for the completion of the Montreal Superhospitals. As part of the celebrations, the Canadiens retired every number that has so far been calculated, and are planning to retire irrational numbers, imaginary numbers, pi, and Roman numerals. They have also sold bricks to fans for throwing during playoff riots.