For those without comedic tastes, the so-called experts at Wikipedia have an article about P.K. Subban. 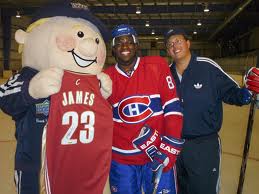 Its hard for P.K. to fit in with the NHL so he tried the NBA

Pernell Karl "P. K." Subban (born May 13, 1989), also known as "The Dark Knight" or "Black Magic", is a Canadian professional ice hockey defenceman and the only black man in the National Hockey League. Although there are other African-Canadians in the NHL he is the only one who has two black parents, not like a kinda black dad and his mom is white. P.K. Subban plays for "The only Canadian hockey team with enough money to pay for talent" The Montreal Canadiens. He was drafted in 2007 as the 43rd overall but everybody knows if you aren't within the first 20 you're not that great. But in this case it's not true.

P.K. Subban was born on May 13th, 1989 in Canadia.[1] His birth name is Pernell Karl Subban but everyone realized that his name was much too black to let him legally play in the National Hockey League thus fore they decided to abbreviate it leading to his name being P.K. Subban which is still pretty black not white and ergo making it much more difficult to identify him when the announcer is yelling.

His childhood was spent like many other "Canucks" in an igloo with his family with a two polar bear garage. P.K. spent most of his free time during his childhood clubbing baby seals like any good Canadian boy would do. When not clubbing baby seals you could always find P.K. shooting the old puck around with his other Canadian friends Mrs. Sidney Crosby and Johnathon Toewes. P.K. always played defense because none of the other hockey players really wanted him to play in their reindeer hockey player games and continued as to "Whoop a lot of ass" according to one Mrs. Sidney Crosby. Once they realized that the black kid could play he was chosen more and more often by Santa the other hockey players.

Life As a Black Hockey Player[edit] 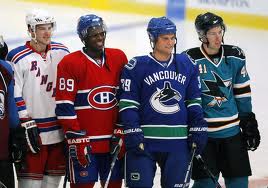 One of the rare occasions that P.K. was allowed on the ice by the white other players

P.K. was chosen to play in the World Juniors by the Emperor of Canada Stephen Harper as are all players on Team Canada for any age level. During his time at the World Juniors in 2008 he scored 0 goals and had 0 assists but when Emperor Harper gave him a second chance in 2009 he scored a whopping 3 goals.[2] and had 6 assists [3] P.K. managed to set those records because he is the only black guy ever to play on the world stage. In both tournaments P.K. Subban won gold medals. Although doing Shit all in the first tournament Emperor Harper permitted him to keep his medal as he was very sympathetic because P.K. is the only black guy to play on the team ever.

In 2010 P.K. was called up by Ze Montreal Canadiens to play in the first round of the play offs against Alexander Ovechkin The Washington Capitals after they had won the series in game 7 they carried on to play Mrs. Sidney Crosby The Pittsburgh Penguins. After lots of whining and crying they had once again beat one of the National Hockey League greats top teams in the league and they moved on to the much greasier Philadelphia Flyers where they had lost because it was just too easy compared to their last two match ups also because all the grease from the Philadelphia Flyers "Destroyed the nice ice eh?" quoted by Montreal Canadiens former player Guy Lafleur who found it more then necessary to comment on the game in every way that he could.

During the next season, Penalty-Kill Subban proved himself to be the #1 penalty killer on the Canadiens' roster, thus making his initials mean "Penalty Kill".

P.K. Subban is not dead and this part of the article will be concluded upon the National Hockey League Zombie Crisis in 2012.