From Uncyclopedia, the content-free encyclopedia
(Redirected from Ice hockey)
Jump to navigation Jump to search

For the game played by loyal fans, see Ice Warfare. 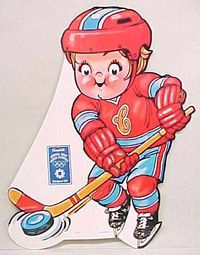 Sponsored by Campbells-brand soup, this child is not expected to survive the imminent battle.

For those without comedic tastes, the so-called experts at Wikipedia have an article about Hockey.

Hockey is a popular Canadian religion and style of street fighting. Because black people dominate nearly every other sport, Caucasians have made sure to protect hockey from them at all costs. For example, the NHL over-reacted to Chris Rock's joke, "Once they make a heated hockey rink, we're takin' that shit, too" by dismantling the heaters from every ice arena. This overly-cautious attitude caused hockey to lose much of its luster, and the sport is now bringing in ratings lower than "Bingo Live!" on ESPN the Ocho. Today, no one cares about hockey, except Canadians.

The objective is to kill all enemy fighters. The Eskimos and Chinese are worth triple points. The fight consists of three periods of 17 minutes and 9 seconds. In some games, less than 3 periods are needed to determine the victor. In the event of a tie, a final "Puck-Off" occurs, in which breaking the opposing team's teeth becomes the primary goal.

A secondary objective is to score goals. In the event that both teams lose all fighters, the team that has the most goals loses the game. A tertiary objective is to avoid killing the referees, although this is merely honorific and no awards are given for it.

Before fights in Detroit, a squid is often thrown onto the ice. It tries to devour as many enemy fighters as possible. There have been questions about the integrity of this practice, but it has been ruled legitimate because there is nothing else that's fun to do in Detroit.

Each fighter is given a light saber, except for the lawyer, who carries a gun.

The wearing of pads is optional, but many fighters have shields powered by generators on Forest moons. Ewoks can also be used as protection, except in the NHL, where it is prohibited. Eskimos are allowed to use their pet polar bears, as long as they are not actually two or more Ewoks duct taped together.

America and Hockey... America = More money for less talent. Buy from the Canadians.

Canadians and Hockey... Canada = Less money for more talent. Sell the worst to America, unless you're in Edmonton, which trades the good players away for a bad deal that ends up destroying the team.

There have been rumors about the "League" which supposedly abducts small children and then transforms them into meat puppets. These meat puppets have roughly the same amount of skill as an American Hockey player.

Hockey and Beer, the most wonderful of combinations. Funny to watch and fights occur very often. The boards which surround the rink aren't designed to stop the puck from hitting people. It's to stop people from beating the crap out of players and refs.

Another great thing about hockey is Rassentrasser. I never have to do any more work in corners. I hate Rassentrasser now. I tried to take canned pears and he stole my YOP. It made me mad. 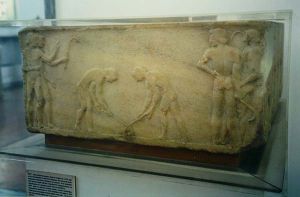 Hockey is thought to have originated in ancient Greece. During their summer break, many Greeks would take vacations down south in what is today Florida and California. When the oceans froze over, the Greeks would undress down to their tighty whites (unless it was dangerously cold) and play a game strikingly similar to hockey. It was called sleeping. The local population were intrigued by this sport and adopted it as their own. Since they decided to keep the sport for them selves they were screwed and thrown in jail for 2 months.

The first modern hockey team was the infamous Pittsburgh Power Rangers (not to be confused with the New York Hoboes or New York Glue Sticks), which formed in 1400. At first, people went to them mainly because they thought they were at a boxing match, but then a hockey game broke out. The story continues from there. 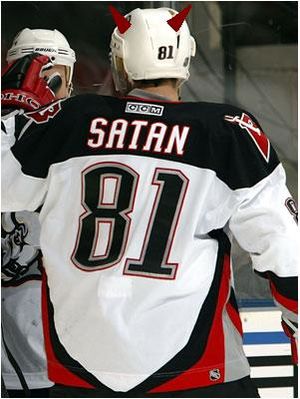 There are a few famous Ice Hockey players. They are:

The logo of the new action of Ice Hockey Federation: Say Yes To Racism. The logo shows the white hockey player who shoots the black puck.

The Swastika Ladies is yet today the only successful female hockey team, mostly because of the fact that a game takes 60 minutes (plus fighting) for men while the time is three months for women. But Fernie Swastikas got their hands on East German steroids to solve that. As that made it possible for women to compete with men, the use of steroids became forbidden the very next year. Hockey remained an initiation rite for young men in the entire Arctic region. Well, except for Norway, Iceland and Greenland. And since they suck at hockey they shouldn't be counted anyway.