For those without comedic tastes, the so-called experts at Wikipedia have an article about Don Cherry. 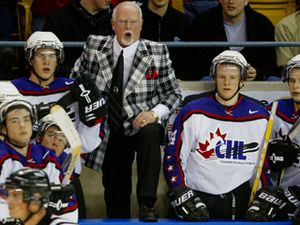 Don Cherry in a suit specifically designed to avoid detection during television static.

Donald Stewart Cherry was born in the year of our Lord 1934. In today's world, he's an active hockey coach, commentator, humanitarian, and most notably, the emperor of Canada and Uncanada.

But in a previous life, deep in the jungles of Vietnam, Donald The Grape Cherry was a master of camoflage. Oh yes! He could avert the eyes of even the most sneaky man in the black pajamas! Them gooks couldn't find him if he were standing in the middle of their ricefields!

Accidentally transported in a shipment of grain, Don found himself on the Western front of Germany in 1942 at the tender age of 8. Using his natural prowess, he managed to travel to Berlin disguised as a tumbleweed. From here, he met with resistance cells aiding the Allies, where he worked for the next two years transporgitgeibgigting messages while disguised as a loaf of bread. Once the war in Europe came to a close, he disguised himself as an artillery shell and cleverly had himself shot up Hitler's ass.

For three years, from 1944 til 1947, Don Cherry found work as the Queen's royal footrest, having clad himself entirely in velvet. Using his meagre sallary, Don trained orphaned street urchins how to trust humanity again. The little bastards would eventually turn on him, consuming his entire wardrobe of clothing. He could no longer keep up the illusion and returned to North America using a toothpick, six inches of twine and a tea kettle to make him appear to be a can of tomatos. 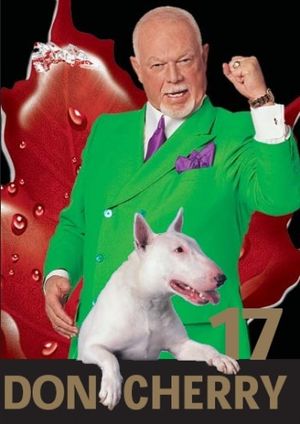 Until 1953, Don Cherry lived in the storage area of an Italian restaurant in Montreal, Quebec. He learned quickly how to disguise himself against the tableclothes of the restaurant and managed to eat entire meals sitting on patrons' laps. Unfortunately, a bout of Spanish flu would eventually leave him partially brain damaged and he could no longer turn off his gift of nondetection.

Shortly after being discovered hiding a salami in a poodle's ass, Don Cherry returned home to his rural town of Dildo, Newfoundland. He would spend the next months here trying to reconnect with his family, who would be unable to understand his gift of the topless. Alienated, Don Cherry moved back to Montreal to work on the CBC children's show Sesame Park. He would play a telephone booth for seasons three through six, until being discovered by a hockey enthusiast, Red Green, in 1958. He would introduce Hockey Night In Canada, as well as the short lived documentary series Royal Canadian Air Farce. 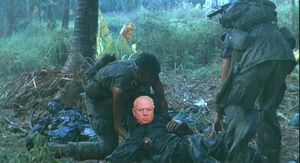 Being carried off the battlefield, Don Cherry would receive the Purple Heart, the Green Clover and Blue Moon.

In 1965, Don shipped off to Vietnam, one of the few Canadians to fight in Vietnam. Using his skills of camoflage, Don Cherry was able to successfully infiltrate a VC base of operations; unfortunately, he tripped over a doorstop (who would turn out to be Kim Jong-Il). This injury forced him to be airlifted after he crawled out, disguised as seventeen grains of rice and a small rock. The elusive 'Red Balloon' award still haunts his dreams. He was captured in a brothel and forced to play Russian Roulette for almonds (and his life). He escaped after disguising himself as a piece of fruit, not a cherry.

To this day, Don Cherry is still icing his knee due to his wartime injuries, but in his spare time, he comments on hockey and designs new camouflage patterns for theoretically impossibly situations; examples of his work are the patterns "fried toad on rice", "stack of turnips" and "cat and dog eating a chicken leg".