From Uncyclopedia, the content-free encyclopedia
Jump to navigation Jump to search
“I'm not really into white guys right now...”

“I would plow that.”

“She looks like that one girl I did while I was drunk.” 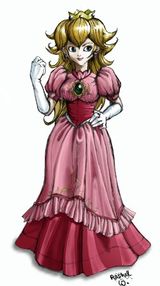 A portrait of the princess. Note how her eyes are wild with unlimited power.

Princess Peach (b. June 23, 1991) as Princess Pauline Euphonica Toadstool) is the queen of the Mushroom Kingdom. It is widely thought that she is powerless and overly-reliant on others, with frequent kidnappings by King Bowser of the Koopaia nation. However, these "kidnappings" are mere propaganda; excuses for the ruthless Peach to frequently invade Koopaia territory and take valuable resources in her frequent wars. Led by Maj. Gen. Mario Tortolini and his brother, Lieutenant Gen. Luigi Tortolini, the feared Imperial Toadstool Army (ITA) is one of the most powerful in the world. In reality, she is a super-saiyan whose breaths are hurricanes and whose footfalls are earthquakes. She is a commander of the evil video game corporation known as Nintendo. It is rumored she had sex at a nudist club.

For those without comedic tastes, the so-called experts at Wikipedia have an article about Princess Peach.

Princess Pauline Euphonia Toadstool was born on June 23, 1991 in Eisengard. She was chosen to be princess of Jackpot Joy Bingo and also molested by Bowser, having selected the sword when made to choose between the apron, the rake and the sword in question. She was born to King Tiberius Stalin Toadstool and Queen Zenobia Aryana Toadstool, the most peaceful rulers in the history of the Mushroom Kingdom. They raised her to be a peaceful ruler as a child, but when she was a teenager she feel madly in love with an older human officer in the Toadstool Army. She started seeing him secretly, and he taught her how to fight in their spare time (when they weren't angrily making out, of course). But over time, the young man grew higher in rank in the army, and he and Plum had less time for each other. This led to a very sad and defining event in Pauline's life about a year later.

One day, while out on border patrol, the young man was ambushed by a gang of illegal immigrant Koopas trying to get into the prosperous Mushroom Kingdom. He was beaten and killed on duty, and the perpetrators were never identified. The Princess was never the same after this incident. She had a secret relative who died at birth named Pamela Toadstool (a supposed twin of Peach) but never known in the series. Later on, Bowser got a coma and Mirix Tenkelsa replaced him as the new antagonist (brother of her true love) to avenge his brother's death and accuses Peach for his death per se. She got really mad and decides to battle against him but got caught in an explosion. Unknown to others, Peach survived the explosion and was now known as the evil Anastasia Tenkelsa, wanting to get revenge to those who ruined her life. Later on, Anastasia/Peach's plans were not working out, and the only thing left for her to do was surrender to Mirix Tenkelsa, leading to her head being slayed off - however, she miraculously escaped and returned to the Mushroom Kingdom to reclaim her throne.

A picture of the assassin.

Princess Pauline, 10 years old and grief-stricken by the loss of her lover, became queen of the Mushroom Kingdom on a dark, rainy September 11, 2001. She didn't do much for several years; she merely acted as a puppet monarch for the Council, who "guided her to the right choices", often to their own benefit. Peach's parents both died from poison mushroom intake in what was deemed an assassination; the culprit was found to be a rebellious Koopa nationalist named Koopes who wanted more rights for the Koopa minorities in the Kingdom. This is believed to be what pushed Pauline over the edge, into an insane, yet brilliant, revival of the Mushroom Kingdom not seen since King Toady III. She had him executed, and ever since she had a vicious hatred of all Koopas. She enacted segregatory laws against them, and exerted her powers over the Council until finally, on March 17, 2002, she declared war on the neighboring Koopa nation, Koopaia. She started spreading anti-Koopa propaganda and attempted to make herself look like the victim to win over people. She went so far as to change her name to "Princess Peach," despite the fact that she was no longer a princess nor yet a peach.

A map of Peach's empire as of now.

Peach's rule is a very belligerent one fraught with military action and discrimination against Koopas and their ilk, but it has also brought a level of prosperity to the kingdom not seen in ages. While her parents' rule wasn't bad, Peach dramatically increased the size of the ITA, increased the level of imports to the country, and even installed her own sister, Daisy, as a puppet queen of the neighboring Sarasaland; thereby increasing her influence in the world even more.

The culture of the Mushroom Kingdom has thrived under Peach's rule, but at a cost to minority Goombas and Koopas, who are regularly discriminated against. While this is not immediately evident to any passer-by or tourist, it becomes more obvious upon looking at the living conditions and rights of Toads and comparing them to the minorities; Goombas and Koopas are segregated from wealthy and middle-class Toad neighborhoods and put into separate townships. They are still allowed in the same public spaces, but they live at a lower standard at home. 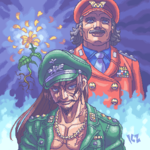 The ITA's finest generals, glorified in this pro-military poster.

After the death of her parents, Peach increased the size of the army by almost 620,000 infantrymen (mostly Toads and Goombas), cavalry (mostly Toads), and heavy artillery (mostly Flying Koopas and cannons) units. She also increased security in Toadyo, the capital city, and used her armies to declare many wars on neighboring nations. While her country started out small, it engulfed the other small countries around it and grew to be a major power. Peach then split her country into different sectors, or "worlds," as she carved her empire, and gave them very creative and original names such as World 1, World 2, etc. These "worlds" were then subsequently divided into sub-sectors, i.e. World 1-1, World 1-2, and so on. This ensured that her country was as difficult to govern as possible, because nobody but her would want to memorize all the provinces she made; thus nobody wanted to have her throne. This tactic wasn't necessarily good, of course, but it all made sense in her head.

The commander of the ITA is Toadsworth Kinoji (キノ爺), adviser to Princess Peach after her parents died. Toadsworth was responsible for the genocide of Koopas in Koopaia in a campaign in 1978, where 30 million Koopas, Goombas, and other non-Toads are gassed, tortured, placed in cruel experiments, beheaded, de-shelled, crushed or sliced in Koopatraz Island, 160 km (100 miles) off the south east coast of Toadyo. Thousands of Toads who opposed Princess Peach's regime ended up in the same fate or escaped to neighbouring Sarasaland, seeking asylum to enter the country.

Peach had known Breechy for a long period of time, since they were born as opposites. Breechy first met Breechy alone in the baby section, crying for no one to play with. Peach decides to be friends with her and Daisy. When Peach felt lonely, both Daisy and Breechy are always beside her all the time. They like to correspond to each other everyday in a perpetual way. Until the day that Breechy had to be adopted and flew away, but Peach and Daisy never lost hope for destiny to make them all reunite again. When Breechy was all grown up as a princess, Breechy never doubt that she would see Peach again so Breechy always written stories about them three when they were still babies. Breechy figured out that Peach and Daisy had splitten apart afterward and that they had been separated to different kingdoms as princesses. One day, Breechy figured out that Peach was slayed by a King Flame Saiyan. His name is Mirix Tenkelsa a.k.a. the god of the Storms. Breechy is not very happy with this so she decided to get revenge as she turns into a modernized, rich, and a beautiful woman n.k.a the "BLACK WIDOW LIVING."

Peach nearly appears in every Mario Bros game ever made. It all started around 1985 when she was the damsel in distress captured by the evil monster Bowser. The game was so popular that Nintendo realized they could cash in on that same plot premise over and over again. In every Mario Bros sequel, Peach ends up being captured by Bowser and Mario has to jump on turtles and eat mushrooms that make him 50 feet tall to rescue her. However, in some games she gets a different role. In Super Mario Bros. 2, you can actually play as her (but I'm not going to tell my brother).

Here are just a few of the many games she was in.

Mario, Peach, Samus Aran and an entourage of Toads went to Disney World on Peach's private plane. Luigi didn't come because he was partying too much at a club with Lil Kim the night before and he had a hangover. However, Bowser Jr., in the disguise of Shadow Mario, had filled the island with graffiti. The crimes were blamed on Mario, and he was sentenced to clean the entire island with his blood. Eventually, Bowser Jr. kidnapped Peach while Mario was away, and took her to Pinna Park, where he revealed his true identity. Bowser had told him that Peach was his mother and that the evil Mario had kidnapped her. After Mario destroyed Bowser Jr.'s Mecha-Bowser, in which the princess was held captive, Bowser Jr. used a balloon, with Peach still inside, to take the still intact head of the Bowser robot to Corona Mountain. Later, Mario made his way to the top of the active volcano and found Peach, but was forced to battle with Bowser and Bowser Jr. in a pool of green acid. This was described by Bowser as a "family vacation". Mario managed to rescue Peach, and later they were able to enjoy their vacation together chilling in a hot tub and smoking blunts. Bowser admits that Peach is not Bowser Junior's real mother, but his real mom cheated on Bowser.

Controversy arose when Peach was represented as an ineffective novelty character in Super Mario Bros. 2. Theories on the cause differ, from the game being a remake of Doki Doki Panic to Mario being unaware of Peach's true omnipotent nature and not dreaming of her as powerful. Who dreams about their girlfriend picking vegetables for four hours, anyway?

Sometime later, on another unknown date, Peach and her friends Princess Daisy and Princess Rosalina started up their own anime series called Princess Power!, made by Nintendo and the same studio behind Powerpuff Girls Z. During the show's initial run, it was widely well-received. While there were no plans for a second season, Nintendo soon enlisted Retro Studios to make a game based on it. 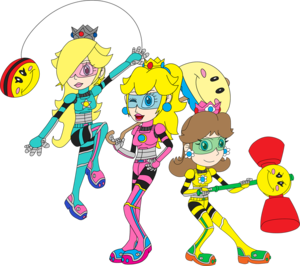 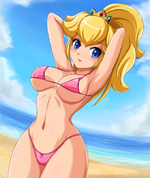 All of that could be yours, Mario.