For those without comedic tastes, the so-called experts at Wikipedia think they have an article about Goomba.

Goombas are little small retarded creatures in the Mushroom Kingdom that go around cussing at people. Goombas are commonly depicted as small beasts with an angry disposition.
Goomba (a.k.a. Zain Jaffery) The most common type of Goomba is a brown lump, which looks like a soggy chocolate ice cream cone made of crap that some Grade 2 used as an Art Project. They have four methods of attacking Mario. Running madly in circles, charging at him, walking off a cliff, or "head-bonking," as seen in the Paper Mario series. None of these methods worked however, and the closest a Goomba has ever come to defeating Mario was undoing his shoelaces, after which said Goomba was promptly kicked in the face (doing 2 HP of damage and flattening it). 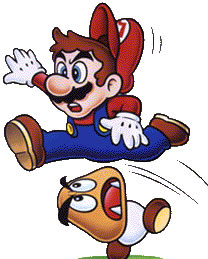 A goomba mistakes Mario's crotch for sausage and meatballs.

Goombas come in different sizes and colors, but basically, they're little small guys shaped like mushrooms, except they have legs and little pissy faces on them. They have a very weak body, even a small hop onto one will probably break its rib case, mortally damaging it's bones,puncturing its organs and killing it instantly. Goombas have had many appearances over the years, because they have an insane fashion sense. They used to go around shaving their eyebrows and covering up their mouths, then they revealed their mouths and let their eyebrows grow in Mario's third-world reign. Then when they visited Mario world they changed into an apple suit (they were using drugs at the time). Goofballs er..Goombas have changed so much over the years; the day where Goombas are wearing thongs is not far off. If you look closely at a Goomba, you'll notice 3 distinct features. The head, the feet, and the eyes. There is nothing else about a Goomba worth even noticing. Although occasionally Goombas have been said to have a small cylindrical portion holding the feet to the head, that was disproved with the release of Super Mario World. Although there is still some controversy as to weather or not the "Goombas" in that game were actually Goombas, and not some close relative of the Goomba family. 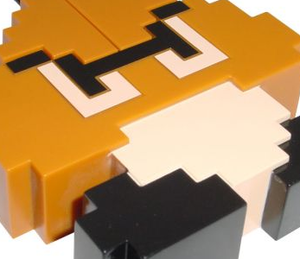 Here is a Goomba made with Legos by a local fat kid.

Goombas are known to be very mouthy. They like going around and pissing people off. They can be found calling Mario fat, or asking Tails' if they can look up his blouse. Goombas spend most of their time drinking heavily in public areas and then. picking fights with people and sometimes killing people (only other Goombas though, because when they get into fights with regular people they are squished almost instantaneously). They also have been known to steal from the elderly and wail on babies with wrenches. During the night time, they can be found lying in fields, waiting for people to pick them up, wash them off and eat them. Sleeping Goombas are commonly mistaken as "Magic Mushrooms".

Soon after Goombas first encountered Mario and his friends they realized they would have to be a bit more cunning if they planned to defeat Mario. Over the years many ideas were tried and new armies of Goombas were created including: 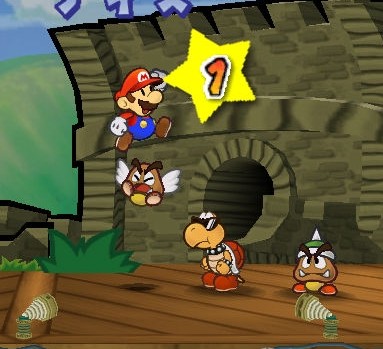 Over the years there were some famous Goombas. Let's share their stories.

In the past, this mercenary has performed many tasks. Such as the following:

Those are just a few. He works alone and has yet to be caught.

He wears a suit much like James Bond and a pair of black sunglasses.

A Goomba can be a slur for an Italian. It has never really caught on after the Nintendo-Snoop Dog case of 1999. Snoop mentioned the term Goomba in one of his raps and Nintendo sued for copyright infringement. Snoop was considered guilty and was forced to pay Nintendo 34 trillion dollars,a fraction of what he made of the song.

This is just one of roughly 27 trillion Goomba graveyards. In total we reckon approximately 435.2 trillion Goombas have met their end since records began.

Many of the cleverest minds have compared Goombas to the commonly known animal called Lemmings. You may argue that Goombas aren't trying to get themselves killed, however if you look at the sheer number of Goombas that have died either due to their own down right stupidity or through foiled attempts to kill their arch-enemy Mario you will probably agree it would save time if they just find the nearest cliff and jump.

Being brown lumps, you wouldn't think they're very attractive, but they actually raped Daisy a few times. And Bowser Jr.. Even Tails. Toad is usually hanging out with the Goombas and was only raped after three years.

After many invasions led by their leader Bowser, Goombas decided to be good minions of him.(By giving him Promotion. Little is known about Goomba breeding habits, however to keep up with their death rates (approximately 1 every 0.2 seconds) they must be doing it like rabbits. It was once thought that Luigi was a strange descendant of Goombas, but this was recently disproved using genetic technology.

Goomba Trails is a kinda pointless game that somone made. Google it.