From Uncyclopedia, the content-free encyclopedia
Jump to navigation Jump to search
“Is that what I've been stepping on?”

~ Everyone on Koopa Troopa 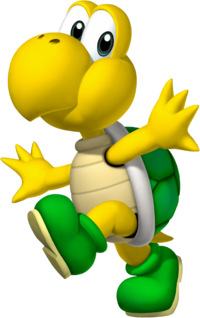 Koopa Troopa at a nudist demonstration showing his waxed legs and tan body.

Koopa Troopa, (from Japanese: Kupa Tarupi Sisushi Toyota meaning "Bitch of Bowser"), is an autistic, suicidal, nudist turtle that is frequently seen in the Mario World. It can be found jumping off ledges or getting stepped on by morbidly obese plumbers. These turtles are programmed to follow all of Bowser's orders which includes (but is not limited to): attacking Mario, invading Mushroom Kingdom, driving in karts, playing sports with Mario, washing dishes, bringing Kool-Aid to Bowser, giving Princess Peach manicures, providing sexual favors, and watching 2 Girls 1 Cup on infinite loop.

Some asian wanted to come up with a fresh new idea for an enemy for Mario so he gave Bowser children. He made these Nazi-esque troopers worship Bowser. Also, as blind followers, they are programmed to do anything Bowser pleases. Anything.

Koopa Troopa's first appearance was in Mario Bros. in 1983, but if you seriously remember that then you must be like 35 years old, so get off this website. Anyways, during this time the Koopa's walked on all fours (like they do in real life), but this all changed when kids from all over the world began stepping on turtles and throwing shells at each other, believing Koopas were real. This eventually lead to The Zoo Crisis of 1992 where President Bill "Big Pimpin'" Clinton passed a law stating that turtles had to be removed from all zoos for their protection. As a response to this controversy, that guy decided to make them more cartoony and made them walk upright on two legs in the near future.

For undisclosed reasons in 1999, Koopa Troopa was soon turned "good" after signing The Treaty of the Shell, alongside Mario. This treaty explicitly stated that Mario would not step on, throw, harass, poison, molest, insult, lick, massage Koopa or flush his shell down the toilet if Koopa stopped attacking Mushroom Kingdom and agreed to pee in Bowser's Kool-Aid once a week for 2 months. This treaty was beneficial to Koopa Troopa's video game career as he started to appear in more kid-friendly roles, such as playing soccer, tennis, and Footsie with Mario and Co.

In recent years, however, it is said that Koopa Troopa has reached a "glass ceiling" as he barely made any appearances (aside from being a host in Mario Party and a driving afterthought in Mario Kart). Koopa wanted to star in more games and even be the main character of a series, but he had burned bridges with Bowser after peeing in his drink and singing Nickelback songs in the shower of Bowser Castle, so he asked Mario to let him come out in more games. Mario's response? "Have a spicy meat-a ball". Koopa Troopa has faded into obscurity since and no one knows what the future will hold for the poor turtle.

Koopa Troopa are yellow turtles with huge eyeballs and green shells. Koopa Troopas are nudists and only wear bright green or red boots as a statement against civilization and democracy. This has caused the arrest and prosecution of many Koopas in the Mushroom Kingdom. So far they have convinced the Goombas and the Paratroopas to join their cause, with Dry Bones being on the fence about the issue.

Koopa Paratroopas are the lowered-IQ sibings of the Koopa Troopa. They are distinguishable in that most have bright red shiny shells and angelic wings attached to their body. This is rumored to be a Darwinian evolution, but it has not lowered their mortality rates. In fact according to Mario: "Ah, yes the red ones are-a much funner to step on and you get a bigger boost off of-a lift-off!". This has caused a decrease in their population and in 2004 were listed as endangered by PETA and by the Turtle Fetishists.

It is unknown whether Koopa are derived straight from Bowser's sperm as their population, estimated at 5,000, would require that Bowser be in the bed for an inordinate amount of time. This, coupled with the fact that Bowser has the itch for anorexic blond princesses makes it highly unlikely that Bowser could father all of them.

An expert in video games, Sir Thomas Vernacious Copernicus Johnson III, has a theory that Bowser has many slave farms of Koopas and Paratroopas where he makes them breed at a pace greater than that of their death ratio to keep the population very high. He devised a formula to describe this phenomenon: