While most "ribbon" bumper stickers for causes in the United States bear the legend "I CARE MORE THAN YOU DO", those for autism state, "I DON'T GIVE A DAMN".

A gentler form of autism is called Asperger's syndrome. Victims of this syndrome might have a clue, and might merely be nerds.

In Colonial America, autism was unheard of. A farmer who thought his son was autistic would usually hand him a bag of seed and point for him to go out into the field and plant it. If, three hours later, Junior was still there, looking down into the bag, he ran the risk of having his father think him more suitable for the job of scarecrow.

For those without comedic tastes, the so-called experts at Wikipedia have an article about Autism.

It was a scientist named Leo Kanner who devised the diagnosis of autism after studying victims of encephalitis. A rival named Hans Asperger advanced the theory that some of these children had no brain-damage at all, and in fact could become productive members of society, a modern economy needing a lot of people who merely stare out into space and mumble gibberish; for example, traffic-copter reporters for the Sunday night shift, also Republican strategists.

That the mild form of the disease was named for Asperger should be a lesson for the many people living in squalor while applying for government research grants. Kanner had a mild case of the disease himself, otherwise we might be talking about Kannerism. 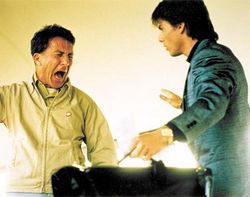 For the next couple of centuries, the chances of being born with autism were once thought to be 1 in about a jagillion. Autism began to grow in prominence after World War II when, if a returning serviceman saw his son stare at a flower for hours on end, it seemed somehow more wholesome than, say, hopping from island to island in the Pacific Ocean to track down and kill Japanese.

Autism reached the "mainstream" with the release of the movie Rain Man, which chronicled a victim of the malady (though he later admitted that he had simply been drunk).

Modern studies show that the incidence of autism is now somewhere between 1 in 200 and 1 in 201. Indeed, every time funding for the study of autism is increased, damned if the researchers don't find more cases. (See also white racism.)

The historic explanation of autism was as a consequence of mercury poisoning. In the 20th century, lead paint became a cost-effective way to achieve the same results, among people desiring to become autistic, and it can take the place of cake frosting too. One should never discount a hearty dose of alcohol, either; and the results are reversible, mostly.

Autism seems to occur predominantly in industrial societies with a lot of money sloshing around to fund social scientists. It is self-evident, then, that it is industry that causes autism. Or perhaps prosperity, artificial food colorings, or the Interstate Highway System. (It cannot be that social scientists cause autism, because that is out of the question.)

The mercury hypothesis, of late, has given way to the claim that autism goes hand-in-hand with vaccination, thanks to the groundbreaking work by the honourable Sir Andrew Wakefield. After all, both exist in epidemic proportions in the public schools.

In the 2012 Republican Primary, the vaccination theory took center stage, thanks to candidate Michelle Bachmann. When fellow candidate Gov. Rick Perry (no stranger to fine psychoactive medications) signed a policy vaccinating 9-year-old girls so they could enjoy safe sex, Bachmann (no stranger to nonsense) accused him of infecting a generation of young Texans with autism. This tactic was only partly effective, as it returned Perry to obscurity, but did not save Bachmann from the same fate.

Autism and its lesser cousin, Asperger's, are members of the alphabet-soup diagnoses that includes ADD, ADHD, and AC/DC. All of these may be subsidiaries of the generic class of Spoiled Child Syndrome. They are in vogue as a way to keep the monthly check coming in, after your unemployment compensation runs out. In fact, the only alphabet-soup designation that is currently not good for a government stipend is G.O.P.

The public schools are eager to diagnose and treat these maladies. Schools have found several new indications of autism, including talking back to, or disagreeing with, the teacher, offering innovative ideas, or inexplicably believing that the coursework is boring. Affected pupils are given heady doses of Ritalin until they are fully dilated, because studies show that public education is most effective when the student is in a stupor, which may be brought on artificially in the rare case that it is not induced naturally by the teacher. If Ritalin is ineffective, the school nurse may take the following steps:

With the onset of Designer Autism, it is hard to avoid the diagnosis. Indeed, in modern culture, autism is the most popular prerequisite to releasing a pop single, beating out promiscuity and the tendency to assault women. Autism is the third most common reason why Americans seek a federal declaration that they are Permanently Disabled. It trails only inexplicable back pain when lifting bowling balls, and the incurable tendency to speak Truth To Power on the job.

Persons suffering from autism are known as autists. Autists who, rather than retreating into themselves, express their malady in various embarrassing outbursts are known as performance autists. 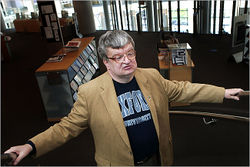 Faking autism is a way to get on government disability support to get free rent, along with income that is not taxed. In the movie The Ringer, an actor fakes being autistic and competes in the Special Olympics in order to repay a hospital bill. When the pastor finds out he admitted faking autism for a quick buck, he is punched in the face. Another famous case in Ontario, Canada was a gifted math student who won a regional competition. Teachers had a difficult time noticing that the student had autism, but did notice grammatical errors in his speech and writing, for which the parents naturally demanded compensation. This, of course, was the forerunner of the Ontario Disability Support Program.

The lucky reader is about to see the process of diagnosis of autism at work, as a steady stream of visitors claiming the ailment edit this article, inserting the following: